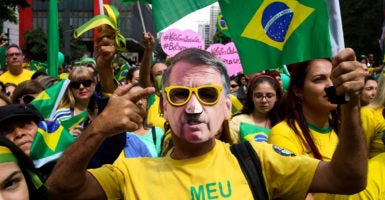 Henrique Carneiro is a member of the Young Leaders Program at The Heritage Foundation.

A conservative candidate who has been dubbed “Brazil’s Trump” is poised to be elected the South American nation’s next president when Brazilians go to the polls Oct. 28 in a runoff election.

On Oct. 7, Brazil held presidential, legislative, and gubernatorial elections. Brazilians used those elections to voice their anxieties about the corruption scandals pervading their entire government, the unacceptable levels of crime, and the worst economic recession in their country’s history.

Since no candidate received more than 50 percent of the vote, Bolsonaro, 63, and Haddad, 55, face off in the second-round vote on Sunday.

The polls currently point to Bolsonaro securing victory with 59 percent of the vote. In addition, 47 percent of those polled say they would never vote for Haddad, while only 35 percent have expressed the same sentiment about Bolsonaro.

The Workers’ Party—the bastion of the Brazilian left-wing establishment—has had anything but a smooth couple of years. Former President Luiz Inacio “Lula” da Silva was the party’s presidential candidate before a conviction on corruption charges disqualified him.

Lula is alleged to have been the enabler of a massive bribery scheme between politicians and major construction companies, a scheme whose inner workings were unveiled by the Brazilian Federal Police’s Operation Car Wash.

Lula’s successor, Dilma Rousseff, also of the Workers’ Party, was impeached and removed from the presidency in 2016 for lying about the country’s fiscal health in order to win re-election in 2014. Haddad has been plagued by his own scandals.

While the presidential race isn’t yet a foregone conclusion, the legislative electoral results are final, and they signaled a shift from the leftist political establishment.

Brazil has a bicameral legislature—a 513-seat Chamber of Deputies and an 81-seat Senate. Both houses will see massive change.

In the Chamber of Deputies, the Social Liberal Party gained 44 seats, increasing from 8 to 52, while the Workers’ Party lost 13, falling from 69 to 56.

In the Senate, Rousseff failed to win her Senate race.

Two of Bolsonaro’s sons—Eduardo and Flavio—were elected to the Chamber of Deputies and Senate, respectively, on their father’s platform.

While Jair Bolsonaro was expected to finish first in the presidential race, the sheer magnitude of his lead was unexpected. As recently as two weeks before the vote, he and Haddad polled at 30 percent and 22 percent, respectively.

Decades of corruption and left-wing mismanagement left many Brazilians disgruntled and Bolsonaro poised to become the first conservative president in Brazil’s democratic era.

Bolsonaro’s anti-establishment views and a personality that has been likened to that of President Donald Trump have made him controversial. He has expressed his admiration for the American president and has embraced the comparison.

Bolsonaro’s clean record as an army captain and congressman, his hard-line stance on corruption, and his pro-market policies have increased his popularity.

Haddad is a former professor of political science and served as education minister from 2005 to 2012. He also served as mayor of Sao Paulo from 2012 to 2016.

Coupled with Jair Bolsonaro’s rhetoric are concrete proposals to combat bureaucratic bloat. He plans to reduce the total number of government ministries from 29 to 15, and supports privatizing or eliminating at least 50 state enterprises during his first year.

Haddad’s domestic-policy proposals feature prison reform and expanding the social welfare state. For him, austerity measures prevent the government from investing in education, health, and infrastructure.

Bolsonaro wants to cut down on labor regulations and proposes a simple income-tax rate of 20 percent for all citizens, with the exception of those who earn less than five times the minimum wage. The Brazilian currency, the real, is soaring in response.

He is also supportive of free trade between Brazil and the rest of the world.

In contrast, Haddad proposes reducing interest on loans for the poorest Brazilians in order to stimulate internal demand.

Bolsonaro has spoken of moving the Brazilian Embassy in Israel to Jerusalem, following the U.S.’s lead.

The Workers’ Party is notoriously supportive of leftist, non-democratic regimes, such as Nicolas Maduro’s Venezuela, Evo Morales’ Bolivia, and Cuba. Indeed, Haddad’s foreign-policy goal is to achieve a regional integration, which would include the anti-U.S. leftist nations.

The Oct. 7 results, however, represent a shift in Brazilians’ attitude away from social democracy and towards a free-market model.

If the first round of the presidential election is indicative of what’s to come, the runoff should leave little doubt about the direction in which the Brazilian people want to take their economy and their country.