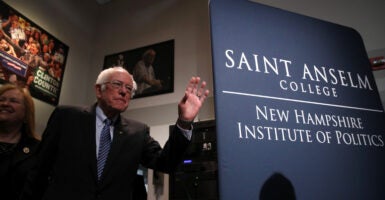 A student at Saint Anselm College—a Catholic college in Manchester, New Hampshire—received a failing grade on an assignment about the biblical account of Creation because he repeated the Book of Genesis’ “gendered language.”

Professor Gilberto Ruiz, who teaches theology at the Benedictine college, gave the student a zero on the assignment because the student used the words “man” and “mankind” instead of “humankind” or “humanity” when describing the story recounted in Genesis chapters 1 and 2.

The original Hebrew and just about every English version of the Bible on the market uses “gendered” terms.

In the New King James Version, Genesis 1:27 reads: “So God created man in His own image; in the image of God He created him; male and female He created them.”

And in the New International Version, Genesis 2:7 reads: “Then the Lord God formed a man from the dust of the ground and breathed into his nostrils the breath of life, and the man became a living being.”

The student may have understood the Bible, but he failed to understand that, at Saint Anselm, social justice trumps the Bible.

Part of the grading rubric for the assignment required the students to “use inclusive language, unless exclusive language is used to reflect the biblical text’s perspective.”

Like so many woke language traps, it’s impossible to tell how not to spring it.

Think about the lesson this teaches the student. He will now rightly fear accurately discussing the text of the Bible and will instead subjugate the accurate reading to the woke reading.

The lesson is this: Nothing, not even Scripture, is more important than obeying the rules of the woke.

You could learn that at just about any college these days. Why bother spending $58,000 a year at Saint Anselm, when the University of New Hampshire will happily indoctrinate students for the bargain price of $19,000 a year?

The University of New Hampshire even offers courses on the Bible, so what, really, is the point of shelling out for Saint Anselm?

And what is the point of continuing to support the school through donations if it behaves no differently than a subsidized public college or university?

A Catholic school like Saint Anselm is free to teach whatever social justice nonsense its students and their parents are willing to tolerate. But at the very minimum, a Catholic college should allow its students to discuss the text of the Bible free from the arcane rules of that cultural trend.

If you donate money to Saint Anselm because you think its Catholic mission should rise above prevailing cultural trends, close your wallet.