California Could Lead Charge in Fight Against Woke Education 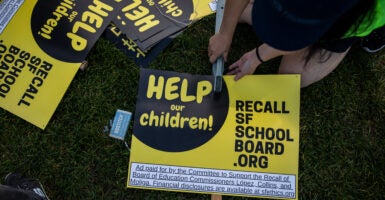 Michelle Wong makes a sign Feb. 12 for a rally in support of the San Francisco Board of Education recall effort. Three days later, voters protesting liberal school policies in the City by the Bay in a landslide recalled three board members. (Photo: Stephen Lam/San Francisco Chronicle/Getty Images)

Greg Karraker is an advertising writer/creative director who blogs about the importance of local politics at thelittlepicture.net. He is the author of "The Little Picture: How Liberals, Progressives, and Twits in Local Governments Are Strangling America, and What to Do About It."

Celeste Fiehler, the mother of three children enrolled in public schools in Southern California, trains parents to help push back against the California Teachers Union.

Just a few short years ago, local school boards were the sleepiest of sleepy government backwaters, with news coverage typically assigned to the unfortunate rookie at the local paper or TV station.

Recent events involving COVID-19 school closings, critical race theory, gender identity indoctrination, and the draconian arrest of a Loudoun County, Virginia, parent just for speaking his mind at a school board meeting have finally cast the spotlight of public attention onto this swamp, and there are signs that the swamp might be drying up. (In light-blue Virginia, Republican businessman Glenn Youngkin won an upset victory as governor, largely because of his promise to reform public education.)

Even in ultra-woke San Francisco, residents voted nearly 80% to 20% in February to recall three board of education members who kept schools locked down and tried to rename schools, including Abraham Lincoln High.

But what about the rest of California? California parents watched for the past two years as poor leadership in the California public school system failed students academically, socially, and emotionally.

Parents were forced to work from home or quit their jobs in 2020 while the demands of the teachers unions kept all teachers employed. One union president from the Coachella Valley District claimed that when parents pushed for schools to reopen, teachers were too “exhausted” to go back.

What an insult to every working family out there that also lived through the COVID-19 pandemic and were also exhausted from having to adjust their lives to the new world around them, but also to the demands of the teachers union.

Parents are angry that their children are being used as human shields by unions across the nation, all for an extra few bucks in the union coffers.

Parents groups formed, and those small groups became a resilient army. They organized rallies, demanded a seat at the table, and called on legislatures and local elected officials to put a stop to their nonsensical legislation and resolutions.

Parents continued to expose controversial subject matter after seeing on Zoom what was being taught.

What we are seeing is a parent revolution across the states. It is like a political party in and of itself, and as well organized. But it isn’t particularly partisan and has brought together Democrats, Republicans, and independents, among all races and income levels.

These parent groups are here to stay. Besides San Francisco, a number of school board recalls are underway, from Desert Sands in the Coachella Valley to Riverside and Orange counties.

That’s at the local level. At the national level, California is leading in the worst way. Despite $14,053 per K-12 pupil, California ranks 18th in spending per year on education. At the same time, it ranks dead last in literacy, at only 77%. That means that nearly 1 in 4 Californians over 15 can’t read this very simple sentence.

Capitol Weekly, the source of those latter figures, has a predictable explanation for this failure: “Decades of underinvestment in schools, culture battles over bilingual education, and dizzying levels of income inequality have pushed California to the bottom of the pile, making it the least literate state in the nation.”

As in a lot of liberal publications, the truth about academic success is blurred or buried.  It emerges in the first sentence of the 11th paragraph: “Parental education might be the biggest factor.” That sounds sort of like what conservatives have been saying for decades.

So, is there any hope for California’s 5,892,240 public school K-12 students, incidentally the lowest tally since the turn of this century?

There just might be. With midterm elections right around the corner, parents are stepping up and throwing their hats into the electoral ring. They are running for school boards and other offices, and supporting and endorsing pro-parent candidates.

Their “cause” is their children, who have become collateral damage across the state of California.

Historically, California has led the country in sweeping cultural changes, from surf music to the internet. Hopefully, it can once again lead the nation, this time in creating the best environment for children to learn, grow, and thrive.