Why Eliminating D’s and F’s Does Students No Favors 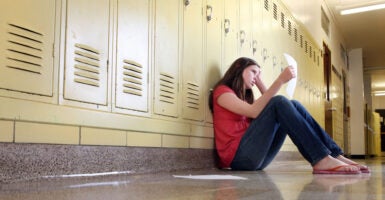 Real life includes failures. It also includes frequent disappointment, which teaches perseverance. We do children no favor by creating a utopian “no fail” bubble that can't be sustained in the real world. (Photo: Katrina Wittkamp/DigitalVision/Getty Images)

As a former school board member in California, and current public school teacher who has taught high school English and is now a physical ed/special education teacher, I think removing D’s and F’s from the grading system is a horrible idea.

Yet that’s exactly what Los Angeles, Oakland Unified, Sacramento City Unified, and some other California school districts are either phasing in or considering doing, according to EdSource.

The purpose of high school is to prepare kids for adult life. Real life includes failures. It also includes disappointment, which teaches perseverance. We do kids no favor by creating a utopian “no fail” bubble that cannot be sustained in the real world.

Eliminating D’s and F’s reminds me of the archer who shoots an arrow and then draws the target around wherever the arrow lands. That way, the archer is guaranteed a bull’s-eye every time.

Since California academic scores are so dismal, educational elites want to move the target and say they are doing it “for the kids,” when they are actually doing it for themselves to hide the fact that public education is failing.

It’s a pathetic tactic of self-preservation. California needs school choice. This union-controlled monopolization of education is not working. We need innovative competition in education, where parents can choose what type of school best fits their children, whether it be public, private, charter, military school, homeschool, or hybrid instruction.

True equity means all parents would have a choice of where to send their kids to school, not just the wealthy.

EdSource, funded by the Bill and Melinda Gates Foundation, sponsored an “expert” roundtable in December that advised teachers should not assign homework, that students should have an open-ended amount of time to turn in assignments and do make-up work, that more attention should be focused on mental health and social-emotional learning rather than on academics, and that removing D’s and F’s will increase attendance, remove pressure, and lower anxiety so students can learn, and will help more students of color get into college.

I asked other California educational experts—outside of EdSource—their opinions, and this is what they said.

Linda Gonzalez is a retired superintendent of a Los Angeles County school district, a former California Department of Education curriculum specialist for English-learner literacy, and international CEO of Reading Tutorial Centers in Asia and Latin America.  She is also an immigrant from Colombia.

She noted, “Historically, lowering standards has never produced better results. Higher expectations have resulted in better performance, improved graduation rates, and college completion. Real improvement would be to give students vocational options that can be completed in shorter time and provide employment.”

Lisa Davis, a school board member for the Capistrano Unified School District is San Clemente, California, said, “We have a problem in California schools. According to [the California Assessment of Student Performance and Progress], which tests students’ proficiency in English and math, only 51% were proficient in English in the state, and 40% in math for the 2019 school year. Data is not available for 2020, and we can only assume with most of California consigned to remote learning that those numbers dropped.

“These proficiency numbers are a problem, but the solutions proposed by the Department of Education in California are preposterous. At the heart of what they are proposing is eliminating testing standards and curbing the potential of those students who naturally excel.

“We are educators, and California’s Constitution denotes education as a fundamental right. Is it then our obligation to test these students to see if they are being educated? If we are failing, as these statistics show, then our obligation is to find out why. And the ‘why’ isn’t the political narrative these new math frameworks are trying to impose.

“Standards matter, and if we’re failing at them, eliminating them entirely is asinine and will move us further away from helping students fulfill their fundamental right to an education.”

Esther Valdes Clayton, a trustee (school board member) of the Coronado Unified School District, the daughter of immigrants, and an immigration lawyer, said, “The inference that Hispanic students cannot achieve on the same rigorous basis as others is false equity, and truly the essence of soft racism of low expectations.”

Why Not ‘Motivate Hard Work, Grit’?

Barbara Lesure, a black adjunct professor at California State University and a retired teacher of the Los Angeles Unified School District, said, “Removing a scoring system in education will result in an ignorant underclass. Why not focus on incentives that motivate hard work, grit, and intelligence?

“Giving out passing grades that are not earned is a further collapse of common sense, which promotes a false self-perception. Ignorance combined with arrogance is a very dangerous combination.”

D’s and F’s ‘in Your Career Get You Fired’

Rick Ledesma, a Hispanic school board member of Orange Unified School District for 25 years and an accountant of corporate finance, commented:

“Removing D’s and F’s from our grading system for high school students will definitely hurt students. It will hide serious deficiencies on important subject matter.

“In the real-world, a D and F performance in your career gets you fired, and then you struggle to gain the skills to improve your performance.

“It could come at a time in life when you’re married and trying to raise a family. Who will suffer then? This is a bad idea. We need these measurements of content retention and scholastic performance indicators called ‘grades’ to expose those students that need help, not just systemically have them advance without grasping and learning the material.

“Would we want students graduating who did D- and F-level work, and did not receive academic intervention, to become a part of our workforce assembling critical medical diagnostic equipment, safety airbags for cars, banking moving tens of thousands of dollars around, and any other important job requiring some level of knowledge base above a D or F performance?

“Hiding deficiencies hurts all students, especially our minority students, and society as a whole.”

Soo Yoo, the president of the ABC Unified School District of Cerritos, California, which has one of the highest academically achieving high schools in the state, said, “These educational ideologues are trying to advocate another policy to dumb down our education system and keep people of color at the bottom.

“My experience as a college admission consultant for the past 25 years and running my own tutoring center for 25 years is that human nature (for all races) needs free competition to thrive.

“As an immigrant from Korea, I think South Korea is a great example of this. It was education that helped South Korea move from the bottom (No. 1 in poverty) at the end of World War II, to now one of the top 10 wealthiest countries in the world. Education helps build a stronger middle class.”

‘Teachers, Students Will Both Get Lazier’

Ms. Chan (a pseudonym), a second-career chemistry teacher who became a teacher after working high up in the medical profession, said, “I believe we are doing an immoral disservice to our lower socioeconomic kids. I teach in a Title 1 District. I was told by my administrator not to expect much from these kids (98% Hispanic).

“I was told to focus on social-emotional learning and to disregard all the math portions of chemistry so kids will pass. My overseers advised me to only teach 25% of the standards. I could have followed their advice in order to make my life easier, but I did not. Instead, I kept high expectations.

“The confidence those ‘failing’ kids gained after struggling and finally getting that ‘Aha!’ moment is paramount to their self-confidence when done right. When D’s and F’s are removed, teachers and students will both get lazier.”

‘Setting Them Up for … Dependence’

A mother of a senior in the Anaheim Union School District said, “School districts are removing our ability as parents to instill a strong work ethic and discipline in our children. They are undermining us by enabling our kids to take the ‘road of least resistance,’ which is setting them up for failure and possibly government dependence.

“Here is my story: During long-distance learning, my son, who was a junior in high school, chose to play video games and watch movies rather than do his work or attend Zoom class sessions.

“As a single mother of three, I was working full time and could not monitor him 24/7. Due to his bad choices, he failed six classes.

“I received a notice from the school that he may not graduate unless he made up those classes. This was a teachable moment for him to learn from his mistakes.

“I could enforce the consequence because he wanted to graduate, and he regretted his bad choices. However, the school counselor met with him, without my knowledge, and said the school would waive four of the six classes, so he now only has to retake two classes to graduate.

“According to my son, they even called this waiver a ‘scholarship.’ So, my son was rewarded for his bad choices, and my reasonable disciplinary actions were null and void.

“My clever son learned that if you ever hint at having ‘anxiety’ over consequences, a magic wand of ‘false sympathy’ will be waived to make it better.

“The school district rewarded my son for his excessive, unproductive time, which may actually hurt him in the real world, where the stakes are much higher.”

A Hispanic community college student, Andrew Tapia, said, “As a student who was in special education and had to work really hard for my grades, I believe dropping D’s and F’s will cause students’ effort in school to drop immensely. The extra time it took me to get good grades in class taught me perseverance and was so worth it!”

In summary, then, based on my experience as an educator of 30 years, a parent, grandparent, director of the Interfaith Statewide Coalition (www.Interfaith4Kids.com), and the opinions of these respected colleagues, I do not believe the rhetoric coming from the so-called experts represented on EdSource’s panel.

I do not trust their motives, and I do not believe they are looking out for the best interest of students. This facade of “empathy” is dumbing down education, which will benefit the elites, but will hurt the common folks, like you, me, our children, and society as a whole.