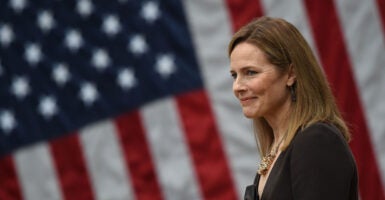 Female Republican senators praised Supreme Court nominee Judge Amy Coney Barrett on Wednesday, saying that Barrett will inspire their daughters and granddaughters through her example as a dignified legal jurist and successful mother.

In Barrett, “we have a role model for our girls, our daughters, and our granddaughters,” said Sen. Shelley Moore Capito, R-W.Va., adding that since Barrett has “traveled a journey that not many of us get to do, we should use that as an opportunity to inspire that next generation.”

“She’s been asked to put her name forward. She’s accepted that. She’s putting her family under tremendous scrutiny, along with her professional life, and that’s not an easy journey in and of itself,” Capito said.

Barrett’s 2017 confirmation hearings gained national attention when Democrats suggested that her Catholicism made her unfit to serve as a judge—and the media have attempted to spin comments Barrett made soon after during an interview on filling Supreme Court vacancies.

Barrett’s Catholic faith has also been called “extreme,” and some media outlets have attempted to link a Catholic group associated with Barrett to the fictional dystopian novel “The Handmaid’s Tale.”

Republican female leaders pushed back against those criticisms Wednesday, emphasizing that Barrett is a “brilliant” jurist and a woman who conducts herself with “grace.”

“Her religion ought not to be a disqualifier for serving on the federal bench,” Sen. Marsha Blackburn, R-Tenn., said, adding that there are “some on the left” who would rather have an atheist or secularist on the bench. “We appreciate freedom of religion. As she goes through this process, we are going to hear more about that, about her life, her character.”

Barrett has seven children, five biological children and two adopted from Haiti, and her critics have questioned whether she will be able to take care of her children and serve as a Supreme Court justice. Media figures have also suggested that Barrett adopted her children for nefarious reasons.

Sen. Deb Fischer, R-Neb., praised Barrett’s ability to balance both an impressive legal career and a large family, saying: “When we look at Judge Barrett, we see an accomplished woman. We see a brilliant jurist. We see a nice person. We see someone who has been able to balance their family life with a husband, seven children, and keep everyone on track.”

“I think it is fitting that we have Judge Barrett being nominated to continue to push forward in breaking those barriers,” Sen. Martha McSally, R-Ariz., said, describing Barrett as a woman of “faith, and of grace, and of brilliance, and of compassion.”

McSally also pointed out the hypocrisy of those who ask Barrett how she will balance her family with serving as a Supreme Court justice. “Nobody asks the men that,” she said.

“She’ll be just the fifth woman, if confirmed, on the court, and she’ll be the first with school-age children serving on the Supreme Court,” McSally added. “That is something that should be celebrated across the country.”