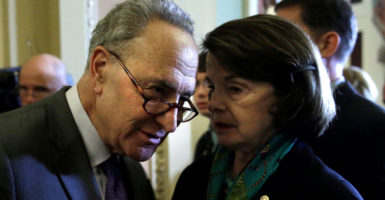 Recent remarks by Sen. Dianne Feinstein, D-Calif., show the script that the left will be using to oppose President Donald Trump’s Supreme Court nominee to fill the vacancy from the retirement of Justice Anthony Kennedy.

The most prominent point so far is that the Senate should wait until after the 2018 election to consider Trump’s nominee. Echoing Senate Minority Leader Charles Schumer, D-N.Y., Feinstein, speaking in the Senate Judiciary Committee’s June 28 business meeting, said following the traditional confirmation pattern would be hypocritical.

Ranking member Feinstein, echoed by Sen. Amy Klobuchar, D-Minn., claimed—as every Democrat and their left-wing allies will certainly do—Republicans set a “new standard” in 2016 that the Senate should never consider any Supreme Court nominee in any election year.

If Republicans had taken that position in 2016, it certainly would have been new and Democrats might well benefit from it today. But that standard has never existed: not before, not during, and not after 2016.

The Constitution gives the power to nominate and, subject to the Senate’s “Advice and Consent,” the power to appoint judges. The Senate’s role begins with deciding the best way to handle a particular nomination.

In 2016, Republicans put their position on this question in writing. In a letter dated Feb. 23, 2016, the Judiciary Committee majority members wrote that the “Presidential election is well underway. Americans have already begun to cast their votes.” They concluded that, “given the particular circumstances under which this vacancy arises … this Committee will not hold hearings on any Supreme Court nominee until after our next President is sworn in on Jan. 20, 2017.”

Two things stand out from this letter. First, it acknowledges that the Constitution gives the power to nominate and appoint judges to the president, not to the Senate. The Senate is a check on the president’s appointment power, but does not have separate or independent power of its own to pick judges. That’s the obvious reason why the presidential election was relevant in 2016, but the mid-term election is irrelevant today.

The second important feature of the Republicans’ letter is their emphasis on the “particular circumstances” that the Senate faced in 2016. Supreme Court vacancies occur under different circumstances, and the Senate has handled them in at least a dozen different ways over the years.

In addition to the presidential campaign in which the American people were already voting, the Senate in 2016 was following the earlier counsel of then-Vice President Joe Biden when he chaired the Judiciary Committee. On June 25, 1992, in the middle of a presidential campaign in which the American people had already started voting, Biden said that, if a Supreme Court vacancy occurred, the “Senate Judiciary Committee should seriously consider not scheduling confirmation hearings on the nomination until after the political campaign season is over.”

None of those circumstances exist today.

While the vacancy after the death of Justice Antonin Scalia occurred in a most irregular way, the Kennedy vacancy occurs at the most regular time: the conclusion of the Supreme Court’s term. The appointments of Justices Elena Kagan, Sonia Sotomayor, Stephen Breyer, and Ruth Bader Ginsburg all followed this pattern. It took the Senate an average of 69 days to evaluate and confirm the justices appointed in the last four decades.

In the same Judiciary Committee meeting, Sen. Cory Booker, D-N.J., claimed that in 2016, the Senate took away “the constitutional power of a president of the United States … . We stripped it away and did not allow him to appoint somebody.”

Nominees fail to receive the consent of the Senate in various ways. In 1968, the Democratic Senate voted against ending debate on President Lyndon Johnson’s nomination of Abe Fortas to be chief justice of the Supreme Court. Johnson promptly withdrew the nomination.

Under the Booker theory then, Democrats first took away a Democratic president’s power to appoint and then that president relinquished that power himself.

In 1992, then-Chairman Biden refused to hold a hearing for more than 50 of President George H.W. Bush’s judicial nominees. The New York Times reported that he did this “to preserve the vacancies for Gov. Bill Clinton to fill if he is elected president.” Under the Booker theory, the Senate took away Bush’s constitutional power to appoint.

No fewer than 19 presidents—starting with George Washington—saw one or more of their Supreme Court nominations fail. American history, it seems, is full of power-stripping.

Or perhaps, the president does not have a power, all by himself, to appoint anyone he wants.

That’s certainly what the Constitution says. In 2016, President Barack Obama nominated someone he knew would not be considered. Had the Senate given its consent, Obama would then have appointed his nominee. In the process of filling the Scalia vacancy, both the president and the Senate in 2016 fully exercised every power granted to them by the Constitution.

The “standard” that Feinstein, Klobuchar, Booker, and other Democrats want to follow this year would serve their interest in opposing a Trump nominee. But that standard—that the Senate should never confirm any Supreme Court nominee in any election year—is the new one and they made it up.