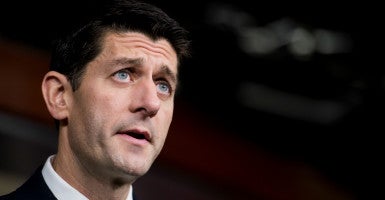 Wanting to show assertiveness in the aftermath of the Paris terrorist attacks, the House overwhelmingly passed a bill to block Syrian and Iraqi refugees from entering the U.S. unless they pass strict background checks.

In a rush before Thanksgiving to comfort nervous constituents back home, Republicans were boosted by the support of 47 Democrats, who provided enough votes to override a promised veto by President Barack Obama.

The legislation, passed by a 289-137 margin, puts pressure on Senate Democrats, whose leader, Sen. Harry Reid, believes that his chamber has the votes to block the bill from being considered.

“For us to sit back and say we are being too harsh, I am here to say we have been too soft for too long, and we have emboldened terrorists,” Rep. Mike Kelly, R-Pa., told The Daily Signal. “We are in crisis management now. I don’t want to be on the receiving line where I lost one of my constituents because they weren’t taken care of.”

Reid, D-Nev.; the Obama administration; and other supportive lawmakers argue that the resettlement vetting process is already rigorous, especially for Syrians, and that Republicans and moderate Democrats are trying to score political points by playing into people’s fears.

“The process that is currently in place is thorough and robust and long as it is fully implemented and not diluted, it will allow us to safely admit the most vulnerable refugees while protecting the American people,” said House Minority Leader Nancy Pelosi, D-Calif., on the House floor.

The current vetting process for Syrian refugees can take up to two years and involves multiple agencies and an in-person interview. Just over 2,100 Syrian refugees have settled in the U.S. since 2012, according to the State Department, and the Obama administration plans to admit 10,000 this fiscal year.

The new security procedure proposed by the House bill would force the FBI director, in consultation with the secretary of Homeland Security and the director of National Intelligence, to assure Congress that every refugee admitted from Syria and Iraq is not a security threat.

Though the House refugee bill, called the “America SAFE Act of 2015,” would only temporarily pause the resettlement program until the screening procedures are implemented, Obama insists that the new checks are unrealistic to perform and would effectively mean that the U.S. would close its doors to refugees fleeing war-torn countries.

“We are not well served when, in response to a terrorist attack, we descend into fear and panic,” Obama said this week. “We don’t make good decisions if it’s based on hysteria or an exaggeration of risks. Apparently they [Republicans] are scared of widows and orphans coming into the United States of America.”

FBI Director James Comey has told lawmakers that Syrian refugees are particularly hard to screen because the country has few criminal terrorist and criminal databases to check.

On Thursday, Comey said it would be “very, very difficult” for him to personally approve every applicant and assure that “there is zero risk,” as the House bill requires.

Still, many Republicans value Comey as an “honest” nonpartisan actor in Obama’s administration, according to Rep. John Fleming, R-La., so they are eager for him to take a more active role in the screening process.

“It’s going to be hard for Senate Democrats to go home and explain why they won’t support this enhanced process and protect American citizens,” Fleming told The Daily Signal. “They will be under tremendous pressure. If this thing is sent to the president’s desk and he refuses to sign, and we have a situation like Paris, and this bill would have protected U.S. citizens, everyone knows the president would have blood on his hands.”

Some members of Congress believe that lawmakers should focus on reforming other, more vulnerable programs, like the visa waiver process that allows short-term visitors from 38 countries—like France—to visit the U.S. with fewer security checks.

Sens. Jeff Flake, R-Ariz, and Dianne Feinstein, D-Calif., will soon introduce legislation tightening the visa waiver program to not allow people who have traveled to Syria or Iraq in the past five years to enter the U.S. this way.

Congress will also be under more pressure to consider updating the AUMF (Authorization of Military Force) that Obama is currently using to conduct his airstrike campaign against the Islamic State, or ISIS, in Iraq and Syria.

“The refugee issue is more a symptom of a failure of by the U.S. and Europe to develop a coherent and effective policy against ISIS,” Rep. Charlie Dent, R-Pa., told The Daily Signal. “That’s the bigger problem. Even though I support the legislation we just passed, and it’s a good first step, it would be mistaken for us to focus all our energy on the refugee issue and ignore this broader policy failure.”

If the Senate filibusters the refugee bill, or Obama vetoes it, the issue and potential other security-related measures will likely become a part of a debate next month over must-pass government spending bills that need to be approved by Dec. 11.

House Speaker Paul Ryan, R-Wis., said Thursday that the appropriations process will feature debate over policy riders, and members say he is open to including measures related to refugees and national security.

“We have to put a limitation on funding [Syrian refugees] in the omnibus, and I think Ryan is willing,” Fleming said. “I think this administration is so out of tune with the American people. When people feel like they can’t be safe, in subways, cafés, and theaters, that rises above any political consideration.”