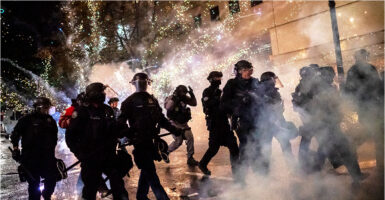 Portland police react as a firecracker explodes behind their police line Sept. 23, 2020, in Portland, Oregon. Violent protests erupted across the nation Wednesday following the results of a grand jury investigation into the police shooting death of Breonna Taylor. (Photo: Nathan Howard/ Stringer/Getty Images)

Portland rioters repeatedly tossed rocks, fireworks, and other objects at officers on Saturday as unrest continued to fester in the city, police said.

Hundreds of demonstrators blocked traffic near a law enforcement precinct and hurled firecrackers, stones, and soda cans at officers attempting to break up the disturbance, according to a Multnomah County Sheriff’s Office press release. Officers were also struck with metal ball bearings from slingshots, the release detailed.

The exact number of arrests made was not disclosed by the Multnomah County Sheriff’s Office, but one arrestee by the name of Michael Colten allegedly eluded law enforcement for two blocks while in zip-tie cuffs, according to the release.

“Officers attempted to disengage and leave the area multiple times in an effort to de-escalate, but each time as they retreated, individuals in the crowd threw projectiles at officers and re-entered the street,” the department wrote. “Officers made additional arrests.”

Cops reportedly recovered a drone in a traffic stop, as officers warned rioters to discontinue their gathering, the Multnomah County Sheriff’s Office wrote. Law enforcement also seized a baton and a can of bear spray after arresting a demonstrator, according to the release.

After largely peaceful protests throughout the day Saturday, several hundred protesters gathered in Downtown Portland around 8:30 p.m. in Lownsdale and Chapman Square Parks.

Portland was also the site of a rally by the Proud Boys, a right-wing group, and a state of emergency was declared ahead of its Saturday visit, according to The New York Times.