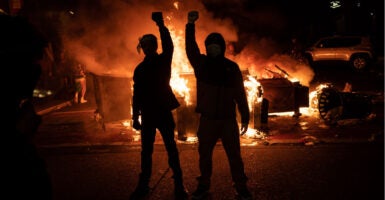 Demonstrators raise their fists as a fire burns in the street after clashes with law enforcement near the Seattle Police Department's East Precinct shortly after midnight on June 8, 2020, in Seattle, Washington. Earlier in the evening, a suspect drove into the crowd of protesters and shot one person. (Photo: David Ryder/Getty Images)

New York City, Seattle, and Portland, Oregon, have allowed ongoing violence and destruction of property and refused to institute measures to prevent criminal activity, the Department of Justice said Monday.

These cities met the criteria President Donald Trump issued on Sept. 2 to identify cities that have not sufficiently dealt with rioters and would be subject to funding review, the department announced.

“When state and local leaders impede their own law enforcement officers and agencies from doing their jobs, it endangers innocent citizens who deserve to be protected, including those who are trying to peacefully assemble and protest,” Attorney General William Barr said, according to the agency.

“We cannot allow federal tax dollars to be wasted when the safety of the citizenry hangs in the balance,” Barr added, according to the Department of Justice. “It is my hope that the cities identified by the Department of Justice today will reverse course and become serious about performing the basic function of government and start protecting their own citizens.”

In New York City, shootings increased after protests and looting started around May 28, while the New York City Council voted to cut the New York Police Department budget by $1 billion, according to the department.

Protests continued in Portland, Oregon, for 100 consecutive nights where rioters started fires, destroyed property, and injured numerous officers, according to the department. The Portland City Council voted to cut $15 million from the police bureau, a move that included eliminating the law enforcement team that investigates shootings, though the city has seen an increase in shootings.

In Seattle, Washington, “anarchists and activists” established the “Capitol Hill Autonomous Zone,” which turned into the “Capitol Hill Occupied Protest” where law enforcement and other emergency first responders were not permitted to enter in June, according to the Department of Justice.

During the month CHOP existed, crime in the area increased 525% from the previous year, including “two additional homicides, 6 additional robberies, and 16 additional aggravated assaults (to include 2 additional non-fatal shootings),” according to the department.