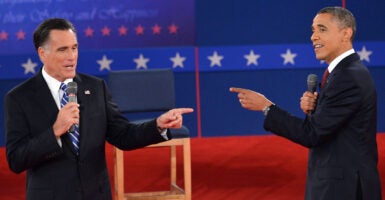 In what has been an unusual election year because of the COVID-19 pandemic—fewer big rallies and no giant conventions—President Donald Trump and former Vice President Joe Biden on Tuesday night will do something that’s more typical of a presidential campaign. They’ll debate.

The impact of presidential debates has varied at these quadrennial confrontations, and has in some cases even been defining.

Here’s a look at some big presidential debate moments.

The face-off between Vice President Richard Nixon, a Republican, and his Democratic opponent, Sen. John F. Kennedy of Massachusetts, isn’t remembered for any major lines, but more as a point in presidential election history.

The four debates between the two were best remembered for being the first televised presidential debates. They would be the last until 1976, when debates became a regular quadrennial occurrence.

The political story is that Nixon scored points in the debate itself, but couldn’t match the photogenic Kennedy on TV. It’s frequently been said that those who listened on radio thought Nixon won, but those who watched it on TV thought Kennedy won. However, there wasn’t instant polling at the time to back that up.

Kennedy, 43, was running to become the youngest elected president in history. Then-Vice President Theodore Roosevelt, 42, was younger when he assumed the office after President William McKinley’s assassination in September 1901.

Nixon, though only five years older than Kennedy, was vice president for eight years under a popular president, Dwight Eisenhower. As such, even having the debate elevated Kennedy’s stature.

It wasn’t until 16 years after the Nixon-Kennedy contest that the next debate took place, in an election that would similarly be won by a razor-thin margin.

During the debate, Ford said, “There is no Soviet domination of Eastern Europe, and there never will be under the Ford administration.’’

Ford had been lagging in the polls, but they were beginning to tighten. The remark was particularly problematic, since the GOP stressed Carter’s lack of experience on the world stage and sought to depict the party as tougher in standing up to the Soviet Union in the Cold War than the Democrats.

The questioner to Ford followed up, “Did I understand you to say, sir, that the Russians are not using Eastern Europe as their own sphere of influence?”

Even given another chance, Ford doubled down.

Carter rebutted, “I’d like to see Mr. Ford convince Polish-Americans and Czech-Americans and Hungarian-Americans that those countries don’t live under the supervision and control of the Soviet Union behind the Iron Curtain.’’

Carter won a close race, with 50.1% of the vote and 297 electoral votes. The Ford debate gaffe might have been responsible at least in part for Carter’s margin of victory.

The 1980 polls were very tight between Carter, then the incumbent president, and his challenger, former California Gov. Ronald Reagan, the Republican nominee.

Although there was significant dissatisfaction with Carter’s job performance, Democrats sought to cast Reagan as too conservative and out of the mainstream.

The two candidates had only one debate—which Reagan dominated. (Reagan had a separate debate with an independent candidate, Rep. John Anderson, R-Ill., which Carter declined to be a part of.)

In the debate that mattered, Carter was aggressive against his challenger, accusing him of seeking to dismantle the social safety net. Reagan fended off each attack and managed to completely disarm Carter by responding: “There you go again.”

The defining line was Reagan asking Americans: “Are you better off than you were four years ago?”

Reagan went on to win a landslide victory with 44 states. With a victory that comprehensive, it’s likely neither the debate, nor any one other factor, decided the election.

But, in the debate, Reagan was able to turn back concerns that he was somehow out of the mainstream and a threat to America.

The 1980s have been called the age of Reagan, in that he brought a conservative revolution to the United States. But in 1984, his Democratic opponent Walter Mondale, who had served as Carter’s vice president, sought to use Reagan’s age as a campaign issue.

Reagan was, at the time, the oldest elected president in American history. When he ran for reelection, he was 73. Democrats raised the issue of whether he was up to the job at his age.

In the first debate, Mondale seemed to best Reagan, whose performance was rather slower than expected—particularly after his strong showing in the debate four years earlier.

However, in the second debate, Reagan defused the issue with his trademark self-deprecating humor.

“I will not make age an issue of this campaign,” the president said. “I am not going to exploit, for political purposes, my opponent’s youth and inexperience.”

Mondale, then 56, could do little else but laugh at the line during the debate, and age was rarely mentioned again.

In 1988, the most memorable debate moment came in the vice presidential contest between Sen. Dan Quayle, a Republican from Indiana, and Sen. Lloyd Bentsen, a Democrat from Texas.

The Democratic presidential nominee, Massachusetts Gov. Michael Dukakis, tapped Bentsen for his experience and hopes of carrying Texas. Republican presidential nominee Vice President George H.W. Bush surprised many with his choice of Quayle, tapped for being a conservative senator and in the belief he would appeal to younger voters.

Bentsen was a grizzled Senate veteran, while Quayle was considered inexperienced. During the debate, Quayle explained his experience in serving in the Senate was comparable to that of John F. Kennedy before he ran for president.

Even so, the Bush-Quayle ticket walloped Dukakis-Bentsen in a third consecutive Republican landslide, winning 40 states.

Nevertheless, the line contributed heavily to a narrative that dogged Quayle throughout his time as vice president.

Incumbent presidents are said to not always do so well in debates because they’re not used to sharing the stage. In 1992, Bush had to share the stage with two challengers, Arkansas Gov. Bill Clinton, who was the Democratic nominee, and Texas businessman Ross Perot, who ran as an independent.

This was the first town hall-style debate format that allowed a group of undecided voters to ask questions of the candidates.

The mainstream media that year frequently cast Bush as detached from regular Americans and awkward, whereas Clinton was depicted as empathetic and could “feel your pain.”

As he was about to take an awkwardly worded question from an audience member, Bush checked his watch. That simple action prompted media speculation that he was somehow bored with the debate process and couldn’t connect.

In what was something of a role reversal from eight years earlier, Clinton’s vice president, Al Gore, often seemed more aloof than his opponent, the more affable George W. Bush, the Republican Texas governor and son of the former president.

During a debate, Gore was heard with audible sighs while Bush was speaking.

Similarly, it was during the town hall debate that Gore seemed to reinforce how his opponents sought to caricature him.

Gore seemingly walked right up to Bush from behind in what was seen as a move to try to intimidate him. Bush simply turned around, nodded, and continued speaking.

After the Benghazi, Libya, terrorist attack that killed four Americans on the 11th anniversary of the Sept. 11, 2001, terrorist attacks in the United States, the administration of President Barack Obama said the attack was inspired by protests against an anti-Muslim video.

The day after the attack, before attending a political fundraiser, Obama passively referenced it as an “act of terror.” However, then-U.N. Ambassador Susan Rice went on a round of Sunday news talk shows, where she blamed the American-made video for spawning protests that spiraled out of control and turned violent. Later information showed it was a planned terrorist attack.

During a town hall-style debate between Obama, a Democrat, and Mitt Romney, a former Republican governor of Massachusetts, Romney criticized the administration’s characterizing it as a protest, rather than as a terrorist attack.

Crowley offered what appeared to be a definitive fact check to what was at best a nuanced question.

Obama had been campaigning asserting that the threat of terrorism was waning, so the Benghazi attack occurring so close to the election was damaging. However, Crowley’s save likely helped him and the administration weather the storm.