How to Use Presidential Debate to Talk About Conservatism 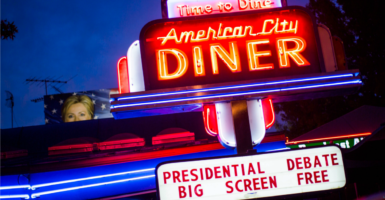 While we want to be entertained during the 90-minute debate (no risk of being slighted this year), you want to move past the performance and instead discuss policy. (Photo: Jim Lo Scalzo/EPA /Newscom)

With an estimated 100 million people tuning in to watch Monday night’s presidential debate, the topic of conversation for the week will be the showdown between Hillary Clinton and Donald Trump, therefore giving you ample opportunity to talk conservative policy.

But you’ll have to be diligent in this endeavor as the memorable moments in presidential debates are rarely about policy:

These moments are brought to you by an “uh-oh,” or a laugh, or a great sound bite, not policy. But we promise the ensuing chatter around these moments and the superficial aspects highlighted by the media allows you to pivot to a substantive conversation.

Here are three ways to focus your otherwise shallow conversation on conservative policy.

While we want to be entertained during the 90-minute debate (no risk of being slighted this year), you want to move past the performance and instead discuss policy. Acknowledge the moments the media will obsess over, but then pivot to the candidates’ policies on your political issue of choice.

For example, if a candidate makes an exaggerated claim about income inequality that the media just can’t stop talking about, acknowledge the claim as absurd and then pivot to policy. Use common identifiers like “we both know his/her statement was absurd, but the policy behind it needs to be addressed. We can both agree that…” You recognize the absurdity of the claim (common ground) and then refocus the conversation on the substance behind the claim.

Use what the candidates say. Even if we witness in-depth policy discussions Monday night, you may disagree with the style and substance. Play off the candidates’ comments to give tangible examples. If the person you’re talking to cares about guns, or health care, or income inequality, refer back to the columns we’ve written about how to have conversations about those topics.

Remember, you win by using an example, personal anecdote, or analogy that frames the policy in a relatable way. And adding in a simple data point along with an example is always a great way to prove you’re right … because numbers, like hips, don’t lie.

NEWS FLASH: Beating someone over the head with your perspective is not persuasive. You gain no ground by talking (or yelling) at someone. They will shut down and likely never want to discuss politics with you again. We know the debate will be heated Monday, but don’t let that tension influence your conversation.

A great way to resist the temptation to yell/kick/scream your way to winning is to use the right words. Talk about “choice,” what’s “fair,” “rights,” and “equality.” It’s been said many times before, but steal the words and phrases used to great effect by liberals. Doing so is disarming, but more importantly, those words accurately describe your conservative policy position too.

While fireworks are expected, remember that what the candidates do on stage won’t be worth mimicking in real life, especially if you want to persuade. Instead, find common ground, use examples, and say the right words.