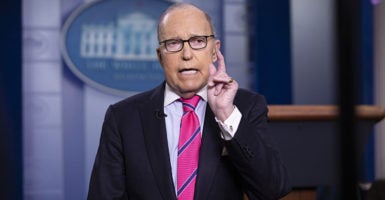 The White House is having internal discussions about the prospect of executive action by President Donald Trump to hold down capital gains taxes, said Larry Kudlow, director of the president’s National Economic Council.

“I personally have campaigned for inflation indexing of capital gains for at least three decades,” Kudlow told The Daily Signal during a press gaggle Thursday at the White House.

The Trump administration’s goal, in theory, would be to end unfair taxation on income from stocks, real estate, or other investments that come from inflationary gains.

The development comes after 51 leaders of conservative groups asked for the executive action in a Jan. 22 letter to Trump. Among the groups are Americans for Tax Reform, Citizens Against Government Waste, and the American Legislative Exchange Council.

The Daily Signal asked Kudlow whether the law allows the president to act without Congress, something the top economic adviser said is under review.

“I have a hard enough time doing my own thing,” he quipped. “[But] inflation indexing in cap gains, would love to see that.”

The letter to Trump—also signed by leaders of the 60 Plus Association, American Conservative Union, and Club for Growth—notes that because Democrats control the House and Republicans control the Senate, it’s not likely lawmakers would pass the proposal.

“With a divided Congress, any effort to pass Tax Reform 2.0 or additional middle-class tax reduction is unlikely,” the letter from conservative leaders says. “On the other hand, ending the inflation tax can be achieved through the administration’s executive authority.”

The capital gains tax is imposed on the profit from sale of certain assets, such as a stock, bond, or real estate. The rate on capital gains taxes is based on a taxpayer’s income tax bracket, ranging from 0 to 15 percent.

In laying out the case to the president, the letter, spearheaded by Americans for Tax Reform President Grover Norquist, states:

Our tax system does not distinguish between these two increases in savings—the economic growth increase and the merely inflationary increase. The whole gain is taxable. According to the nonpartisan Tax Foundation, fully one-third of all unrealized capital gains are due only to inflation. …

According to legal scholarship going back decades, the executive branch can define cost basis in an investment in such a way that the inflation tax on savings can be eliminated. Rather than having to pay tax on both real and inflationary gains, a family or business selling an asset would only pay tax on the real gain, or the gain derived from economic growth.

Last June, Treasury Secretary Steven Mnuchin told The Wall Street Journal the administration would prefer that Congress pass legislation, but could act on its own in lieu of that.

“If we’re not able to complete Tax Reform 2.0, then we’ll go back to the drawing board and decide whether we want to consider this on a nonlegislative basis,” Mnuchin told the Journal.

In August, Sen. Ron Wyden, D-Ore., the ranking member of the Senate Finance Committee, insisted that such a move without Congress would be bad policy and legally dubious.

“According to Treasury sources, the Trump administration is considering flouting the law to cut taxes on capital gains—permanently,” Wyden said during a committee meeting. “It’s a $100 billion handout to the super-wealthy.”

Wyden added that such a policy would be challenged in court.

“There is awfully compelling evidence that what the Treasury is considering is illegal,” Wyden said. “The first Bush administration even decided it didn’t have the legal authority to make this change without congressional action. There’s no question that following through on it now would bring on a legal firestorm.”

In 1992, during President George H.W. Bush’s administration, the Justice Department’s Office of Legal Counsel contended that the Treasury Department lacked the authority to make regulatory changes on taxes without Congress.

Norquist points to a 2002 Supreme Court ruling in Verizon Communications Inc. v. Federal Communications Commission that determined regulators have leeway in how they determine “cost.”

In a 2012 paper, lawyers Chuck Cooper and Vincent Colatriano point to the court ruling as well as the Internal Revenue Code in arguing that the 1992 legal opinion is flawed.

The code doesn’t require that the “cost” of an asset be measured only as its original price, they argue. So Treasury would not have to count value from inflation, only actual gains.

Two Republican senators, Ted Cruz of Texas and Pat Toomey of Pennsylvania, last year proposed indexing capital gains taxes. But even with the Senate under Republican control, the plan likely could not attract the 60 votes needed to pass.

Without weighing in on the issue of executive action, Adam Michel, a senior policy analyst for The Heritage Foundation who specializes in tax policy, said indexing capital gains is good policy. Heritage was not among the groups represented in the letter to Trump.

“Indexing capital gains taxes is a necessary policy to alleviate the inflation tax on investment in America,” Michel told The Daily Signal. “It is silly for the government to tax inflation. Indexing would be sensible.”