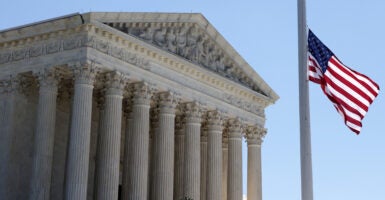 Over four years, the president has put a total of 11 women on four lists of contenders for the Supreme Court. Pictured: An American flag flies at half staff Monday outside the U.S. Supreme Court building in honor of Justice Ruth Bader Ginsburg, who died Friday. (Photo: Alex Wong/Getty Images)

President Donald Trump says his choice to fill Ruth Bader Ginsburg’s Supreme Court seat is going to be a woman.

“It will be a woman, a very talented, very brilliant woman,” Trump told reporters Saturday in Fayetteville, North Carolina. He reiterated that in a speech Monday evening in Vandalia, Ohio.

It’s not known for sure who is on Trump’s short list of five candidates for a nomination by the end of the week. However, the president over the past four years has released or endorsed four lists of contenders for the Supreme Court, some with overlapping names, that include 11 women.

Allison Jones Rushing, 38, of the U.S. Court of Appeals for the 4th Circuit, also is often mentioned, including by Trump during a “Fox & Friends” interview early Monday.

Barrett, of Indiana, clerked for Justice Antonin Scalia, who died in 2016. She was part of the legal term that represented George W. Bush in the Bush v. Gore case in which the Supreme Court decided the contested 2000 election.

Barrett taught law at George Washington University, the University of Virginia, and, most recently, Notre Dame. She was on the Trump list for the high court released in late 2017.

Lagoa previously was a justice on the Supreme Court of Florida and an assistant U.S. attorney for the Southern District of Florida. She received her law degree from Columbia University.

Rushing, of North Carolina, clerked for Justice Clarence Thomas and then-Judge Neil Gorsuch on the 10th Circuit before he joined the Supreme Court as Trump’s first pick.

Trump appointed all three women to their appeals court seats.

Historically, federal appeals court judges are named to the high court. So, if Trump doesn’t pick one of the three women named above, it might well be one of the following from his earlier lists.

Margaret A. Ryan, 56, of the U.S. Court of Appeals for the Armed Forces, was appointed by President George W. Bush in 2006. As a military judge and a veteran, she stands out among other contenders.

Ryan, 52, served in the Marine Corps in the Philippines and during the Persian Gulf War. She graduated from Notre Dame Law School on a military scholarship and served as a judge advocate general, or JAG officer, for four years.

Ryan, who clerked for Thomas, was on Trump’s list during his presidential campaign in 2016.

Diane Sykes, of the U.S. Court of Appeals for the 7th Circuit, is a former justice on Wisconsin’s Supreme Court. Sykes, 63, previously served on the Milwaukee County Circuit Court in 1992.

Sykes’ former husband, Charlie Sykes, is an anti-Trump conservative commentator. She also was on the Trump campaign’s 2016 list to fill Scalia’s seat.

Bridget Bade, 54, of Arizona, is on the 9th Circuit. Bade previously was both a U.S. magistrate judge and an assistant U.S. attorney for the District of Arizona.

Allison Eid, of the 10th Circuit, previously served as a Colorado Supreme Court justice who was appointed by then-Gov. Bill Owens, a Republican, in 2006.

Eid, who won 75% of the vote to retain the position in 2008, was previously Colorado’s solicitor general. A graduate of the University of Chicago Law School, she clerked for Thomas. Trump’s 2016 list included her.

Joan Larsen, of the 6th Circuit,  previously was named to the Michigan Supreme Court by Gov. Rick Snyder, a Republican.

In 2002, Larsen became an assistant U.S. attorney general in the Justice Department’s Office of Legal Counsel. Larsen, 52, also taught law at the University of Michigan.

Larsen received her law degree from Northwestern and clerked for Scalia. She also was on Trump’s 2016 list.

District court judges usually issue fewer precedent-setting rulings than do appeals court judges. Yet two women on district benches made it onto Trump’s most recent list.

Martha Pacold, 41, has been on the bench of the Northern District of Illinois since August 2019. She previously was deputy general counsel of the Treasury Department. A former clerk to Thomas, she received her law degree with honors from the University of Chicago.

Sarah Pitlyk, 43, has been a judge for the Eastern District of Missouri since December 2019. Previously special counsel at the Thomas More Society, Pitlyk clerked for Kavanaugh at the U.S. Court of Appeals for the District of Columbia Circuit. She received her law degree from Yale.

Historically, a Supreme Court pick doesn’t have to be a judge.

Trump added Kate Todd, of Virginia, to his most recent list alongside several men who also do not have experience as a judge.