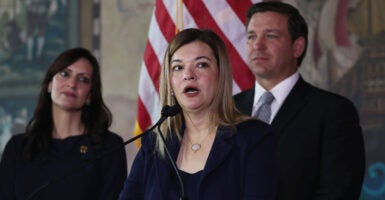 President Donald Trump has spoken highly of federal appeals court Judge Barbara Lagoa (center), and she is among the candidates being considered for elevation to the U.S. Supreme Court. Pictured: With Florida Gov. Ron DeSantis and Lt. Gov. Jeanette Nunez looking on, Lagoa discusses her nomination by DeSantis to the Florida Supreme Court on Jan. 9, 2019, in Miami. (Photo: Joe Raedle/Getty Images)

The death of Supreme Court Justice Ruth Bader Ginsburg has set off intense political debate over who should get to name her successor. On the short list of President Donald Trump—who has announced he would nominate a woman to succeed Ginsburg on Sept. 26—is federal appeals court Judge Barbara Lagoa.

When asked about Lagoa before leaving for a campaign rally in North Carolina on Sept. 19, Trump had this to say about her: “She is an extraordinary person. I’ve heard at length about her. She’s Hispanic, and she’s highly respected.”

In light of Lagoa’s prospects for elevation to the high court, here are seven things you should know about the judge.

1. She Is of Cuban Descent

Before being named by Trump to the U.S. Court of Appeals for the 11th Circuit in 2019, Lagoa had been appointed by Florida Gov. Ron DeSantis earlier that year to the state Supreme Court, making her the first Hispanic woman to serve on the state’s highest court. Prior to that, Lagoa had served on Florida’s 3rd District Court of Appeal since her appointment by then-Gov. Jeb Bush in 2006.

Lagoa was in the majority in a recent ruling of the 11th Circuit upholding Florida Republicans’ efforts to circumscribe the restoration of voting rights to ex-felons.

She also voted as a member of the Florida Supreme Court in 2019 to side with the business community over a proposed Miami minimum wage increase that ran counter to state law.

“For lower court judges, all Supreme Court precedent, including Roe v. Wade … is settled law,” Lagoa wrote while being vetted for her current judgeship. “If confirmed, I would faithfully apply this precedent and all other precedents of the Supreme Court.”

Since lower court judges do follow precedent, it’s not clear if Lagoa’s views would be the same for a Supreme Court justice.

Lagoa is a graduate of Columbia University School of Law. While in law school, she served as an associate editor of the Columbia Law Review, the school’s prestigious undergraduate legal journal.

6. Has Already Been Vetted

Lagoa won broad, bipartisan Senate support during her confirmation for the U.S. Court of Appeals for the 11th Circuit in 2019. The 80-to-15 vote in her favor would suggest she has a strong chance of getting through the Senate confirmation process a second time around.

7.  Would Be Youngest Justice on Court

Lagoa, who will turn 53 on Nov. 2, is about two months younger than Trump’s first high court pick, Justice Neil Gorsuch.