Question Fools Don’t Ask of ‘Experts’: ‘What Is the Price?’ 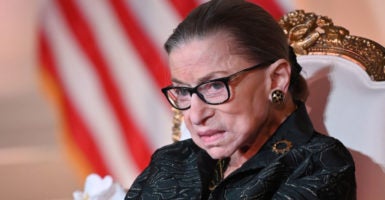 Justice Ruth Bader Ginsburg, pictured at the Library of Congress on Feb. 14, was among the Supreme Court justices whose question touched on whether abortion providers should even be allowed to bring lawsuits asserting the right of women to access abortions. (Photo: Shannon Finney/Getty Images)

The case, June Medical Services v. Russo, involves a Louisiana law that requires doctors who perform abortions to have admitting privileges at a nearby hospital. Admitting privileges enable doctors to accompany their patients to the hospital and treat them there.

In Whole Woman’s Health v. Hellerstedt in 2016, the Supreme Court invalidated a similar Texas law because it found that the law constituted “an undue burden on women’s access to abortion.” The court did not rule that laws requiring admitting privileges are per se unconstitutional.

An issue that was not raised in Whole Woman’s Health but that was raised in June Medical Services is whether abortion providers should even be allowed to bring lawsuits asserting the right of women to access abortions.

Litigants must demonstrate “standing” to bring a legal challenge. They must demonstrate actual injuries that they have suffered or will suffer as a result of the defendant’s conduct. As a general matter, courts will not hear lawsuits asserting the legal rights of a third party except in limited circumstances.

But in 1976, the court, in Singleton v. Wulff, allowed an abortion provider to assert women’s legal rights based on third-party standing. Before that ruling, nearly two-thirds of all legal challenges to abortion regulations were brought by women; today, only about 7% are. In these cases, courts typically gloss over any discussion of abortion providers’ standing, assuming doctors and clinics may bring suit premised on the rights of women.

Justice Clarence Thomas has observed the irony of the court creating a right to abortion because it “involve[s] the most intimate and personal choices a person may make in a lifetime, choices central to personal dignity and autonomy” and yet allowing “special rules that cede its enforcement to others.”

Third-party standing came up several times during the oral argument in June Medical Services. Justice Samuel Alito asked Julie Rikelman, the lawyer for the abortion clinic, if a party should be able to sue “ostensibly to protect the rights of other people, if there is a real conflict of interest between the party who is suing and those whose rights the party claims to be attempting to defend?”

She said that Louisiana’s law “restricts abortion by regulating the physicians, rather than their patients … so it’s appropriate for them to be the plaintiffs here.” She continued, pointing out that there isn’t “a single thing that would have been different” if a woman had been a plaintiff in the case.

One obvious thing that would have been different is knowing whether women would prefer to see doctors who can treat them at the hospital in the event of an emergency.

Louisiana Solicitor General Elizabeth Murrill argued that the doctors here “do not meet the modern, rigorous rule for third-party standing”—in part because their interests conflict with the women they purport to represent.

“What sane woman … is going to have a conflict with a doctor who wants to protect her rights?” Justice Sonia Sotomayor asked incredulously. ” … Their interests are not misaligned, they want to achieve the same holding, that this law unduly burdens her right to abortion.”

Jeffrey Wall of the U.S. Solicitor General’s Office, representing the federal government, asserted that the interests of doctors and women are “not necessarily aligned.” Abortion providers may have an interest in “not being regulated in particular ways,” and women have an interest in “their own health and safety,” Wall said. If women wanted to challenge this law, they could.

Justice Ruth Bader Ginsburg brought up the 1976 decision Craig v. Boren where the court allowed a beer seller to bring an equal protection challenge to a state law barring the sale of 3.2% beer to men between the ages 18 and 21. The individual male plaintiff had turned 21 while the suit was pending, but the court found that this didn’t prevent it from deciding the case.

Ginsburg asked Murrill how this case is different from Craig, and Murrill explained that Craig is “better characterized as a mootness case,” since an individual plaintiff had brought the lawsuit to vindicate his own rights. Murrill also asserted that the interests of the beer seller and its customer were “better aligned” than here, where the state sought to protect women from the very doctors challenging the law.

Indeed, the history of abortion providers’ health and safety violations in Louisiana—such as failing to report the rape of a minor and a doctor’s incompetence leading to an emergency hysterectomy—shows the clear conflict between the interests of abortion providers and women.

Aside from Alito, the conservative members of the court did not ask about standing, focusing their questions on the benefits and burdens of the law and how to apply the Whole Woman’s Health ruling. But that does not tell us what they think about the merits of the standing argument.

The court should make clear that abortion providers have to follow the same legal rules as all other litigants. Women can speak for themselves, and, perhaps, the fact that no woman joined this suit sends a message about what the women of Louisiana want.