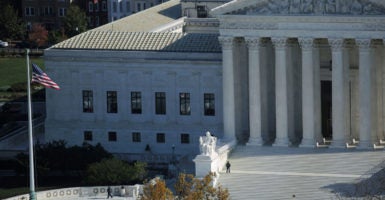 President-elect Donald Trump is that rare president who will nominate a Supreme Court justice almost immediately after taking office.

Trump is expected to act quickly to fill the seat of Justice Antonin Scalia, who died in February. During a Thursday interview with Sean Hannity, Trump announced he’s narrowed his original list of 21 people to “probably three or four.”

Two of the remaining eight Supreme Court justices, Ruth Bader Ginsburg, 83, and Stephen Breyer, 78, are older than average for a justice and may choose to retire. One-third of the potential nominees on Trump’s list of 21 contenders are 50 or younger, and four are women.

This could present a historic opportunity for Trump to reshape the Supreme Court, author and presidential historian Craig Shirley says.

It is less likely these justices will retire. It’s more likely they will go out feet first. When you’re in your 80s, you might as well show up at the office. You’re not going to take up water skiing.

“I’m not aware that the president has spoken to this, either publicly or privately,” Earnest said. “I think the president’s expectation is that President Trump will fill vacancies on the Supreme Court by appointing people who are quite different than the kind of people that President Obama appointed.”

“President Trump will fill vacancies on the Supreme Court by appointing people who are quite different than the kind of people that President Obama appointed,” @presssec says.

Top Trump adviser Kellyanne Conway has said the president-elect is committed to choosing justices from the list of 21 candidates he released earlier this year.

Trump’s release of the list during the campaign was an unprecedented move, Carrie Severino, chief counsel and policy director for the Judicial Crisis Network, noted after the election.

“Given the significance of the court to Trump’s voters, I’m confident that he will stand by his campaign promise to appoint someone from his excellent list of constitutionalist judges,” Severino said in a formal statement, adding:

While that still would leave the Supreme Court in a 4-4-1 balance, with Justice [Anthony] Kennedy as a swing vote, Trump is likely to have the opportunity to appoint additional justices, who can ensure that the Constitution is interpreted according to its text and original meaning and isn’t used as a vehicle for political policy goals.

Most on the list are state Supreme Court justices or U.S. Court of Appeals judges. The list include two individuals who have served in Congress and would have a political record to defend. Two brothers also are on the list.

Trump faced some criticism for lack of diversity, with eight white males among the 11 names on the initial list he released in May; his subsequent list in September included one South Asian and one Hispanic.

At Senate confirmation hearings, Supreme Court nominees who already are judges typically avoid directly answering questions about how they would rule on a policy that might come before the nation’s highest court.

However, three of those on Trump’s list were elected by voters to offices that require taking public stances during the course of a campaign. Two of the three have gone on to become judges:

Not since President Ronald Reagan nominated Arizona state appeals court judge Sandra Day O’Connor to the Supreme Court in 1981 has a state judge of any kind been elevated to the high court.

Trump could follow the model of most recent Supreme Court nominations by choosing a federal appeals court judge.

Two of President Barack Obama’s nominees were appellate judges—Sonia Sotomayor, confirmed by the Senate, and Merrick Garland, his pick to replace Scalia, who has not been confirmed.

This story was updated to include Trump’s comments on “Hannity.”