March for Life Unveils 2021 Theme of ‘Together Strong: Life Unites’ 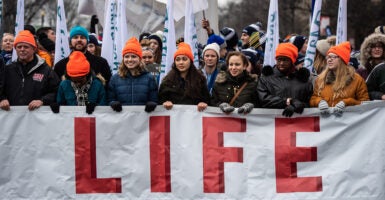 March for Life’s 2021 theme aims to unify the county around the pro-life message. Pictured: Marchers make their way down Constitution Avenue in the nation's capital Jan. 18, 2019, during the 46th annual rally and march. (Photo: Salwan Georges/The Washington Post/Getty Images)

During what might well be one of the most divided moments in America’s history, organizers of the March for Life are calling the nation to stand united. “Together Strong: Life Unites” will be the theme of the 2021 March for Life in Washington, D.C.

Next year’s march, set for Jan. 29, will mark the 48th anniversary of the Supreme Court’s 1973 Roe v. Wade decision legalizing abortion nationwide, and will take place nine days after the next president is inaugurated.

After more than three months of racial tensions in America following the May 25 killing of George Floyd in the custody of Minneapolis police, the March for Life organizers are calling on Americans to stand together.

“Life. It is the most basic civil right,” said Ryan Bomberger, founder of the Radiance Foundation and one of several African American pro-life leaders to speak during the Thursday evening announcement. “Without life, nothing else matters. Without life, no other rights matter.”

More than 20 million black lives have been lost to abortion since the Roe v. Wade decision in 1973, said Catherine Davis, founder and president of the Restoration Project, a Georgia-based organization with a mission of restoring the sanctity of life in the black community.

Planned Parenthood, Davis said, is at the center of what she regards as a genocide:

Planned Parenthood targets black women with the message that their unborn baby is a “disease and will kill them if they carry to term or give birth,” Davis said.

The hourlong event featured remarks from many of the most prominent leaders within the pro-life movement, including Alveda King, director of African American Outreach at Gospel of Life and a niece of Martin Luther King Jr.; Lila Rose, president of Live Action; Rep. Chris Smith, R-N.J.; Christina Bennett, an activist with the National Black Pro-Life Coalition; and Kay C. James, president of The Heritage Foundation.

“Life is our most basic human freedom,” James said.

Each entity within the pro-life movement plays a significant role for the cause of life, she added.

“At Heritage, while we do research and analysis, and produce data, we recognize the importance of political action.” James said. “And we recognize those organizations that do such a phenomenal job of grassroots organizing.”

The March for Life, one of the original grassroots entities within the pro-life movement, quickly grew into a national campaign to end abortion.

Since the first march in 1974, pro-life men, women, and children have flooded the streets of the nation’s capital every January in solemn remembrance of the now more than 60 million lives lost to abortion, and to peacefully protest Roe v. Wade.

The annual gathering has gained heightened national attention over the past four years due to the Trump administration’s support of the event.

Last January, President Donald Trump became the first president to speak to the gathering in person. In 2017, Vice President Mike Pence spoke at the rally preceding the march.

Pence made a brief appearance during Thursday night’s virtual announcement.

“We are endowed by our Creator with certain inalienable rights, including the right to life,” Pence said during a prerecorded video montage.

Though the theme reveal was virtual, March for Life organizers plan to host the event in person Jan. 29 on the National Mall. They announced little about the speaker lineup for the gathering, but Christian singer-songwriter Matthew West said he will perform at the march.

The mission of the March for Life—to make abortion unthinkable and to instill a culture of life in America—can be achieved only through unity, Mancini, James, and others stressed.

“We’re strong, and we will reach our goal when we work together,” James said.