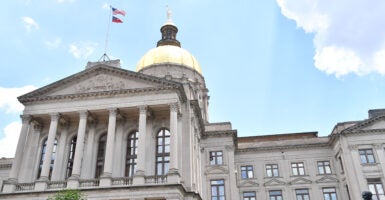 Georgia's secretary of state said this week he was referring the roughly 1,000 cases of voters who voted by absentee ballot and in person in the June 9 primary to the office of the state attorney general and to local prosecutors to determine how to handle them on a case-by-case basis. Pictured: The Georgia state Capitol in Atlanta. (Photo: Paras Griffin/Getty Images)

Two states seen as possible battlegrounds for the November presidential election had major revelations of alleged voter fraud within a week’s time.

The Georgia secretary of state’s office announced Tuesday that about 1,000 people voted twice in the state’s June primary, with charges likely to follow. They were referred for possible prosecution.

Just six days earlier, a federal prosecutor in North Carolina announced the indictment of 19 foreign nationals who are said to have illegally voted in the 2016 election.

“All of these cases show that we do have problems in the election system,” Hans von Spakovsky, manager of the Election Law Reform Initiative at The Heritage Foundation, told The Daily Signal.

“One case involved aliens registering to vote, and the other involved people double voting and getting away with it,” added von Spakovsky, a former member of the Federal Election Commission and a former member of the Presidential Advisory Commission on Election Integrity in 2017. “Fortunately, in Georgia, the state secretary of state caught it. But key to this is that local election officials at polling places let people vote twice.”

In a news conference, Georgia Secretary of State Brad Raffensperger said he was referring the roughly 1,000 cases of voters who voted by absentee ballot and in person in the June 9 primary to the office of state Attorney General Chris Carr and local prosecutors to determine how to handle them on a case-by-case basis.

“A double voter knows exactly what they’re doing, diluting the votes of each and every voter that follows the law,” Raffensperger told reporters at the state Capitol in Atlanta. “Those that make the choice to game the system are breaking the law.”

The Atlanta Journal-Constitution reported about 150,000 people who requested absentee ballots went to the polls—in some cases because the ballots didn’t arrive, or simply opted to vote in person. In other cases, poll workers saw the person had already voted. But about 1,000 people slipped through to cast a second vote.

Absentee ballots previously made up about 5% of voting in past elections, but escalated to 50% for the June primary amid the COVID-19 pandemic.

Meanwhile, on Sept. 2, Matthew G.T. Martin, the U.S. attorney  for the Middle District of North Carolina, announced the indictment of 19 foreign nationals on voter fraud charges.

The 19 foreign nationals, who were ineligible to vote, nevertheless cast ballots in 2016 and at least one voted in 2018, according to Martin’s office.

“According to court charging documents, each defendant voted in a federal election in 2016,” said the U.S. attorney’s press release. “One defendant also voted in 2018. Noncitizens are not eligible to register to vote or to vote in federal elections.”

All 19 were charged with voting by noncitizens. Of those, 12 were also charged with a misdemeanor in connection with laws prohibiting noncitizen voting in elections held to elect federal officials. A federal grand jury issued those indictments on Aug. 13.

Five of the foreign nationals were charged separately with a false claim of U.S. citizenship by a noncitizen and another charge of a false statement in voter registration.

In 2018, in separate cases, that same number of defendants—19 noncitizens—were convicted of illegally voting. The 2018 cases came from the Eastern District of North Carolina.

On separate matters regarding both North Carolina and Georgia, the election watchdog Public Interest Legal Foundation filed two court briefs asserting that both states had thousands of double voters in 2016 and 2018, The Washington Times reported on Sunday.

The legal foundation filed briefs in North Carolina and Georgia, because lawsuits requesting large amounts of voter data are already pending in the states.

An audit in North Carolina found about 20,000 voters appeared to have double-voted in the 2016 and 2018 elections combined, the Times reported.

In Georgia, the foundation determined that more than 4,000 dead people were still on the voter registration rolls, and that about 16,000 people double-voted across the 2016 and 2018 election cycles.