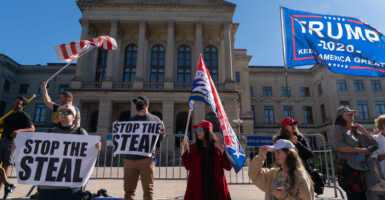 The Trump campaign’s legal team described suitcases full of ballots Thursday in presentations to Georgia state lawmakers that included a video and a call for the legislators to appoint electors to vote for the president.

Other Georgia state and local officials, meanwhile, said the Nov. 3 election ran smoothly in the Peach State, with no widespread voter fraud.

In back-to-back hearings at the Capitol in Atlanta, the state Senate’s Government Oversight and Judiciary committees sorted through controversies and allegations that emerged from the voting.

State legislators in closely contested Pennsylvania, Arizona, and Michigan also held election-related hearings this week. The Trump legal team has filed court challenges in those states as well as in Wisconsin and Nevada.

Trump campaign lawyers also made arguments Thursday in a Nevada court, challenging the results in that state and calling witnesses to present evidence.

Here are highlights from the two Georgia hearings.

Major media outlets on Nov. 7 projected Joe Biden as the winner of the election, saying the former vice president had garnered more than the necessary 270 electoral votes. But President Donald Trump hasn’t conceded as his campaign pursues legal options.

The Electoral College votes Dec. 14, and those electoral votes are set to be counted officially by Congress on Jan. 6.

The Trump legal team in Georgia made a video presentation of what the lawyers described as—and what appeared to be—continued vote counting after the process supposedly had stopped.

An election worker told count observers and the press to clear out of State Farm Arena in Atlanta on election night for more than two hours, saying that counting of Fulton County ballots would temporarily stop, said Jackie Pick, who narrated the Trump team’s video presentation to the Judiciary Committee.

The video seemed to show that after the volunteer observers and reporters were gone, several election workers stayed behind and continued counting votes unobserved until early the next morning, Nov. 4.

The video appeared to show election workers—evidently unaware or not caring that cameras were still running—pulling four suitcases out from under tables after the others left the room.

“What are these ballots doing there separate from all the other ballots? And why are they only counting them when the place is cleared out with no witnesses?” Pick asked the lawmakers.

“These machines can process about 3,000 ballots per hour. You have multiple machines there. They are there for two hours. So you do the math,” Pick said, adding:

How many ballots went through those machines in those two hours when there was no one there to supervise, to be present, consistent with your statutes and rules, to supervise the tabulation? We believe that could easily be and probably is certainly beyond the margin of victory in this race.

2. About That Water Leak

Fulton County, the largest of Georgia’s 159 counties, ran an exemplary election, argued Robb Pitts, chairman of the Fulton County Board of Commissioners.

“I can tell you beyond a shadow of a doubt, there has been no instance of any unusual activity within Fulton County. I have been personally involved in it,” Pitts told the Government Oversight Committee, adding:

Has there been a situation from time to time where there is an issue with technology? Yes. Has there been a situation where there may have been human error? As far as an orchestrated effort to manipulate the votes in Fulton County, that’s not the case. I have challenged anyone who has made those allegations, come forward, bring that information to me, and I will take it seriously and we will get to the bottom of it.

Much news out of Georgia on Election Day had to do with a water leak that resulted in a temporary halt to activity by election workers.

“People are seeing ghosts in the shadows and we need you to expand on that, if you don’t mind,” Miller said.

Pitts said rumors about the incident took on a life of their own, and assured the committee that it was no problem.

“There was a leak in the floor above where we were counting ballots at State Farm Arena, according to Steve Koonin, CEO of the Atlanta Hawks, that occurred at 6:07 a.m. [Nov. 3],” Pitts said. “At 8:07 a.m., it was repaired within two hours.”

“No ballots were damaged,” he said. “No equipment was damaged. End of story. How this has gotten to be what it is, I have no idea.”

Biden won Georgia by only about 12,500 votes, Ray Smith, the Trump team’s lead counsel in the state, reminded the Judiciary Committee.

However, 2,506 felons voted illegally in Georgia, Smith told the committee. He said another 2,423 voters weren’t registered to vote; 1,043 of those who cast ballots registered at a post office box; and 4,926 voted despite registering to vote after the deadline.

“Because of the irregularities and abject failure of the secretary of state of this state and the counties to properly conduct the election, it is impossible to certify the results of the 2020 presidential election,” Smith told the lawmakers.

Georgia Secretary of State Brad Raffensperger is a Republican, but has drawn fire from Trump supporters for saying the state’s election operations went smoothly.

Smith said 10,315 ballots appeared to be cast by voters who were dead by Election Day, and another 395 voters cast ballots in Georgia and another state—which if true would violate at least two state laws.

Smith also asserted that 15,700 individuals had filed a change of address with the U.S. Postal Service before Nov. 3, and 40,279 voted after moving across county lines at least 30 days before Election Day without reregistering in their new county.

“Normally in an election contest under Georgia law, the remedy is a new election. That would certainly be a possible remedy in the instance,” Smith said. “We are asking the court to order a new election.”

But, he said the Legislature must act to appoint electors, citing  the U.S. Constitution’s provision that “each state shall appoint, in such manner as the Legislature thereof may direct, a number of electors equal to the whole number of senators and representatives to which the state may be entitled in Congress.”

State Sen. Elena Parent, a Democrat, objected to the idea of the Legislature’s taking advantage of its ability to name a new set of electors, presumably for Trump and not Biden.

“I think the courts can handle this once you’ve presented your evidence to them,” Parent said. “As I’m aware, there have been about 40 lawsuits dismissed already, and according to the law of the state of Georgia, we do not have the power to submit alternate electors. The provision in the law is quite clear.”

4. ‘No Evidence Wrong Winner Was Declared?’

Georgia has some of the strongest election laws in the United States, including laws against ballot harvesting and accepting votes after Election Day, Ryan Germany, general counsel for the Georgia Secretary of State’s Office, told the Government Oversight Committee.

However, he said, the Secretary of State’s Office didn’t find worrisome problems.

“We have not seen anything that would suggest widespread fraud or widespread problems with the voting system,” Germany told the committee.

The office has 230 open election-related investigations, he said.

“I don’t think fraud is the right word. I like to think about it more as legal votes or illegal votes,” Germany said.

He gave numbers that were significantly lower than those cited by the Trump campaign lawyer.

“We have about 300 instances of alleged double-voting, people that voted absentee and on Election Day,” Germany said, adding:

We are looking at that. That’s significantly down from what happened in the primary, based on some protections we put into place. We have about 70 instances of potential felon voting. So that’s what we’re looking at. We have not seen anything to suggest widespread fraud or widespread problems with the voting system.

“No evidence that the wrong winner was declared of the presidential election in Georgia?” Parent asked.

Germany noted that voter drop boxes included cameras that election officials could review to ensure that no fraud was occurring.

The Trump campaign has asked for an audit of signatures to verify the legitimacy of Georgia’s absentee ballots.

Germany said investigations occur based on complaints that cite evidence. So, he said, the Secretary of State’s Office would not conduct a statewide audit of signatures on all absentee ballots.

“We are looking at that from any individualized, specific complaint that we get. I think what people are asking us to do is look at all of them, all 1.6 million, because some [absentee ballots] weren’t returned,” Germany said.

But state Sen. Steve Gooch, a Republican, had a concern.

“We just elected the most powerful person in the world,” Gooch said. “How can we certify this election this week knowing that a fourth of the ballots haven’t been verified by professionals or audited?”

Germany expressed support for requiring voters to provide a photo ID, but turned this question on lawmakers for the Legislature’s passage of no-excuse absentee voting—meaning a person doesn’t have to provide a reason for not voting in person.

“In 2005, when we moved to photo ID, this body on a party-line vote went to no-excuse absentee voting that did not require ID,” Germany told senators. “So that’s our law. So that’s how we certify it, because it followed the law.”