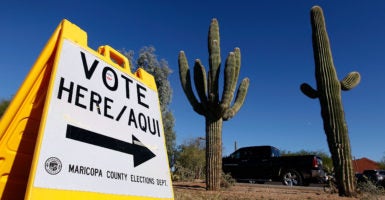 Arizona is one of 20 states with a law restricting the practice of ballot harvesting. Pictured: A sign directs voters to a polling station on Nov. 8, 2016, in Cave Creek, Arizona. (Photo: Ralph Freso/Getty Images)

With mail-in voting becoming a national issue during the COVID-19 crisis, the Supreme Court could decide to hear a cornerstone election integrity case.

On the line is Arizona’s ban on ballot harvesting. The state prohibits political operatives and activists from having access to large amounts of absentee ballots for the purpose of collecting votes.

Arizona is one of 20 states with a law restricting the practice.

Also on the line is Arizona’s in-precinct voting law, which, as in most states, requires voters to cast an in-person vote at a polling place in their local precinct.

The 9th U.S. Circuit Court of Appeals, a liberal bench that frequently is overturned by the Supreme Court, in late January struck down Arizona’s 2016 election law in the case of Democratic National Committee v. Hobbs.

“I anticipate that a bunch of states will be interested in joining our case,” Arizona Attorney General Mark Brnovich told The Daily Signal in a phone interview.

“If the 9th Circuit decision stands, it could put in jeopardy all kinds of commonsense voter integrity measures. That means laws preventing voter intimidation, laws preventing multiple voting, and laws protecting the secrecy of the ballot,” Brnovich, a Republican first elected in 2014, said.

“The court’s ruling will restore out-of-precinct voting and ballot collection for the 2020 election after finding that this Republican voter-suppression effort was a discriminatory attack on voters of color, including Native American, Latinx, and African-American communities,” Perez said in a written statement in late January. “As Democrats, our goal is to engage every eligible American voter as an active participant in our democracy by making it easier for people to vote, not harder.”

Ballot harvesting, which allows professional campaign operatives and political activists to have access to absentee ballots and authority to recruit voters, is allowed in 27 states and the District of Columbia.

Two Senate Democrats—Ron Wyden of Oregon and Amy Klobuchar of Minnesota—have proposed a bill that would, among other things, allow nationwide ballot harvesting. They are promoting the legislation as a means to allow more voting during the COVID-19 pandemic.

Critics of ballot harvesting say it exposes voters to coercion and intimidation in their own homes, without protections normally present at polling places. There is also a significant record showing that legal vote harvesting leads to illegal fraud and intimidation.

For progressives, ballot harvesting has become a major priority nationally.

In Minnesota, Attorney General Keith Ellison, a Democrat, settled a challenge to the state’s ban on ballot harvesting. Under the settlement, candidates in that state will be allowed to help cast ballots, Snead noted.

The Arizona case is significant, he said.

“Fortunately, the state of Arizona is seeking Supreme Court review,” Snead said. “So there is an opportunity there for anyone looking to provide amicus support to file a brief. That is a tremendously important case in terms of protecting our elections against ballot harvesting.”

Brnovich, the Arizona attorney general, contends that the case largely is about the left’s trying to seize control of elections.

“The hard left always tries to advance its agenda,” Brnovich told The Daily Signal. “Tom Steyer and George Soros are pushing their left-wing agendas by trying to control the election process. These elitist billionaires just want to control lives and can do that by controlling elections.”

Brnovich said this is shortsighted ambition for the Democratic Party, considering a North Carolina congressional race in which  the Republican candidate nearly stole an election through ballot harvesting.

“We want people to have confidence and faith in the election system,” the attorney general said.

The Arizona Legislature passed legislation in 2016 to restrict ballot harvesting in the state unless the person collecting a ballot is a family member, a person living in the same household, or a caregiver.

Brnovich said the law was based in part on the bipartisan Commission on Federal Election Reform in 2005 chaired by former President Jimmy Carter and former Secretary of State James Baker.

The Carter-Baker commission recommended that states “prohibit a person from handling absentee ballots other than the voter, an acknowledged family member, the U.S. Postal Service or other legitimate shipper, or election officials.”

Since the 1970s, Arizona has required voters to vote at a polling place in their precinct.

If the Supreme Court agrees to take the case, it will have a substantial record to review, Brnovich said.

The Democratic National Committee filed suit over the Arizona law in 2016. Arizona won the case in the U.S. District Court in 2018 after a 10-day trial with 33 witnesses.

Arizona then appealed to the Supreme Court.

Brnovich obtained a stay of the 9th Circuit’s decision, leaving Arizona’s laws restricting ballot harvesting and out-of-precinct voting in place while the high court decides whether to hear the matter.

Arizona’s petition contends that since so many states have similar measures, the case presents an appropriate vehicle to establish a clear rule of law for the country.