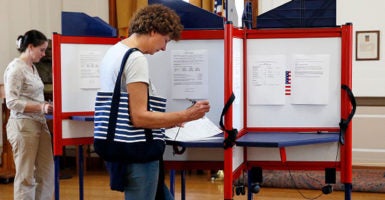 In Texas, they are called “politiqueras” and in Florida, they are called “boleteros.” Broadly speaking, these are professional campaign operatives and political activists who have access to absentee ballots and authority to recruit voters.

Such ballot harvesting, allowed in 27 states and the District of Columbia, gained much attention this year when corrupt handling of absentee ballots led to an invalidated U.S. House election in North Carolina. But such controversies are hardly new, as explained in a recent Heritage Foundation report.

Mayor Anthony Grant was elected in Eatonville, Florida, in a close 2015 race thanks to absentee ballots. Grant was convicted on charges of voter fraud in 2017 that included coercing absentee voters to vote for him.

Mayor Ruth Robinson of Martin, Kentucky, was convicted along with family members in 2014 on civil rights and vote fraud-related charges. Prosecutors said Robinson’s conduct included threatening and intimidating poor and disabled residents into casting absentee votes for her in the 2012 mayoral race.

The Heritage report, written by Hans von Spakovsky, manager of the think tank’s Election Law Reform Initiative, says ballot harvesting should be banned in states that now allow it.

“Unless a voter checks with election officials after the election to verify that his or her ballot was received, the voter would never know what happened,” von Spakovsky, a former Justice Department lawyer and former member of the Federal Election Commission, writes. He adds:

It seems highly unlikely that the vast majority of absentee voters, particularly the elderly, the infirm, or the disabled, would engage in such verification. Even if they do, they may not be able to identify which campaign operative picked up their ballot or what happened to it.

However, the North Carolina State Board of Elections didn’t certify the result because of evidence of a “coordinated, unlawful and substantially resourced absentee-ballot scheme.”

The Heritage report also notes that ballot harvesting was a concern in Orange County, California, after a registrar of voters said individuals were “dropping off maybe 100 or 200 ballots” at a time.

Orange County traditionally has been a GOP stronghold in heavily Democrat California, so the flips there contributed to what became a blue wave in 2018.

“It is a dangerous and foolish public policy that threatens the integrity of elections,” the report says of ballot harvesting. “It should not be implemented by state legislatures—and should be prohibited in the states that currently allow it.”

Texas enacted a law in September 2017 to make it a first-degree felony to engage in organized election fraud. The law includes a clause specifying “with the intent to establish, maintain or participate in a vote harvesting organization.”

Earlier this year, in the first case under the law, prosecutors charged 19 individuals, including Edinburg Mayor Richard Molina. The Texas Attorney General’s Office alleged that Molina and campaign surrogates—or “politiqueras”—sought to register ineligible voters from outside the city.

Yet Texas did not outright ban ballot harvesting, and most states allow it.

The Heritage report notes that a Miami-Dade County grand jury issued a public report in 2012 calling for the Florida Legislature to ban anyone from being “in possession of more than two absentee ballots at one time,” unless the ballots are “those of the voter and members of the voter’s immediate family.”

The other 15 states that allow harvesting—but with no restrictions on returned ballots—are Alaska, California, Connecticut, Florida, Illinois, Iowa, Kansas, Kentucky, Maryland, Oregon, Pennsylvania, South Carolina, Texas, and Virginia. The District of Columbia also has no restrictions.