Yes, What Happened in North Carolina Is Voter Fraud 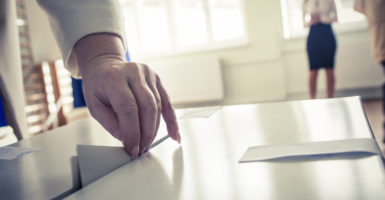 "Voters are victimized any time there is electoral fraud, regardless of who perpetrates it or what they want to call it," writes Jason Snead. (Photo: bizoo_n/Getty Images)

More than a month after the November election, the details of an apparent voter fraud scandal orchestrated by a North Carolina Republican operative are still coming to light. A coordinated absentee ballot harvesting ring may have gathered, tampered with, or destroyed hundreds of ballots.

The outcome of the House race in North Carolina’s 9th Congressional District hangs in the balance, and the state elections board may order a new election. Voters across the country are watching, rightly alarmed at the apparent ease with which some of their fellow citizens were effectively disenfranchised.

Amazingly, in the middle of all this, some on the left are more focused on what to call the fraud in the 9th District than on how to stop it from happening in the future.

Over the last few days, outlets like Vox, ThinkProgress, and CNN have all published articles telling readers that it is important not to call the North Carolina scandal “voter fraud.”

No, they say, it must be called “election fraud.”

These articles imagine, as Vox puts it, that there is a “fundamental” and “meaningful distinction” between the two. Vox argues that voter fraud occurs when an individual votes despite being ineligible, or impersonates someone else in order to cast a ballot, and that election fraud, by contrast, involves larger coordinated schemes that harm voters.

So, when a “voter commits the fraud” it constitutes voter fraud. But when it is the “voters who get defrauded,” and are made, as CNN put it, “victims,” it should be called election fraud.

What Vox, CNN, and others seem to miss is that voters are victimized any time there is electoral fraud, regardless of who perpetrates it or what they want to call it.

Elections are the foundation of our democracy, and voters value not only their own individual ballots, but the credibility of the process as a whole.

Consider the hypothetical cases these outlets put forward as examples of “voter” rather than “election” fraud. In these cases, someone’s identity may be stolen, depriving him or her of the chance to vote in an election. Voters are effectively disenfranchised by illegal votes cast for opposing candidates or causes. A small number of illegal ballots—even just one—can swing the outcome of a tight race, raising grave doubts in a community about the integrity of the process and the validity of the results.

In each of these cases, legitimate voters are the victims. It does not matter one whit whether a voter or someone else perpetrates the fraud.

For the record, the Republican operative at the center of the North Carolina “election fraud” scandal is not only a voter, but an elected official. The harm exists regardless.

The media outlets are right about one thing, however: There are different types of electoral fraud.

The Heritage Foundation has gathered 1,177 proven instances of fraud from around the nation and compiled them into a searchable voter fraud database, with entries broken out into various categories: ineligible voting and absentee ballot fraud among them. These different types of fraud are merely differences of degree, not, as Vox and others argue, differences in kind.

Each instance of fraud harms individuals and the electoral process.

Liberals nevertheless are committed to their arbitrary distinction, and it’s easy to see why: It is useful to them.

The left has spent years claiming that voter fraud is a myth. Now, as they try to capitalize on the fraud in North Carolina, their past denial of fraud could cause them a political headache. So could their opposition to voter identification laws, and virtually any reform intended to strengthen election integrity.

Creating faux distinctions between “voter fraud” and “election fraud” lets them point fingers at Republicans and advocate a new race and a fresh shot to flip another House seat blue, all while insisting that “voter fraud” still does not exist. And because the left erroneously claims that voter ID laws can only stop the types of cases they call “voter fraud,” it allows them to continue to oppose identification requirements, too.

These semantic sleights-of-hand should leave a bitter taste in the mouths of every American. Election integrity is, or at least should be, a nonpartisan issue—it is about protecting the voting rights of all Americans against fraudsters who would steal that right from them.

Unfortunately, some liberals seem less interested in stopping the next case of fraud than in figuring out how to profit from the aftermath of this one.

Whether we choose to call it “voter fraud” or “election fraud” is immaterial. What matters is that we should not bury our heads in the sand, that we recognize that threats to election integrity exist, and that we take steps to mitigate all of them.