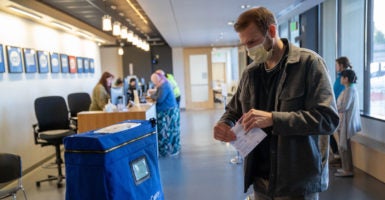 Voter Taylor Miller prepares to cast his ballot during early voting at the King County Elections processing center on March 9 in Renton, Washington. Early primary voting continued in the state with most of the ballots submitted by mail. King County has had the highest number of deaths in the U.S. due to the coronavirus outbreak. (Photo: John Moore/Getty Images)

COVID-19—is there anything the coronavirus can’t do? Sens. Amy Klobuchar, D-Minn., and Ron Wyden, D-Ore., seem to think it should make the feds tell the states how to run their elections.

They’ve introduced a bill that would do just that.

S. 3529, the Natural Disaster and Emergency Ballot Act of 2020, is aptly named because it could bring an electoral disaster in November. Not only is it unnecessary, but it would also make it easier to fiddle with election results.

Under our Constitution, Congress sets the time, place, and manner of federal elections, but it is the states and particularly county governments that actually administer the elections.

Our Founders designed this structure because they understood that giving the federal government authority to run elections would also give that government—including the incumbents controlling Congress and the incumbent in the White House—the ability to manipulate election rules to ensure their desired election outcomes.

Since Democrats took over the House in 2018, they have been pushing bills to increase federal control of our elections. They started with H.R. 1, which was dead on arrival the minute it hit the Senate. Now, amid the coronavirus crisis, they seem to think the time is ripe to take another stab at it.

According to Klobuchar’s March 18 press release (the text of the bill was still not available at Congress.gov as this was being written), the “disaster” bill would require every state to offer at least 20 days of early voting and “no-excuse” absentee balloting. Talk about gilding the lily!

Every state already allows absentee balloting, and two-thirds don’t require you to have an “excuse”—such as sickness, disability, or being out of town on Election Day—for using them.

But the problem with the bill goes beyond the fact that there is no need to impose a federal mandate on top of already existing state requirements. The larger problem is that it would require changes in how absentee ballots are handled and processed—and the prescribed changes would increase the risk of election fraud.

While the health crisis may necessitate greater use of absentee ballots, no one should be happy about it. That’s because absentee ballot fraud is one of the most common—and easiest—methods used to cheat and intimidate voters.

Just look at what happened in the (ultimately overturned) 2018 9th Congressional District race in North Carolina. There, political operatives took absentee ballots from voters, then altered or filled them out before submitting them.

So, what are some of the changes the new bill would mandate? Well, currently, states require absentee ballots to be postmarked by Election Day. This is to prevent people from seeing voting results and then organizing an after-the-fact, get-out-the-(absentee) vote campaign to try to change those results.

Yet S. 3529 would force states to accept absentee ballots as long as they have been supposedly “signed” by the voter before the polls close. Obviously, there is no way to verify that.

This is very different from election officials accepting the official postmark of the U.S. Postal Service as evidence that an absentee ballot was cast before the polls closed. This change would give individual voters (or vote harvesters who collect their ballots) the ability to easily cheat by waiting until they see the results before voting.

The bill also orders states to begin processing votes cast during early voting or by mail 14 days before Election Day to “avoid delays” in the counting of votes on Election Day.

Most states don’t allow early votes to be processed and tabulated before Election Day for a very commonsense reason: to obviate the possibility of early results being leaked.

If leaked to the media, early results could discourage some voters from casting ballots. If leaked to candidates or political parties that are trailing, it could give them information they can use to modify or refocus their strategy to change the results.

As for the provision to force states to allow 20 days of in-person early voting, how does that make sense at a time of social distancing, when we are limiting—even banning—public gatherings?

Even if it were desirable, a federal mandate is hardly necessary. Fewer than a dozen states don’t already allow some degree of early voting, and those that don’t could surely change that on their own, should health concerns somehow make that advisable.

While the health advantages of early voting are dubious, at best, the electoral aspect has some shortcomings, as well.

This month, Klobuchar herself exposed one of those shortcomings in ending her presidential run. She withdrew from the race on March 2, just one day before the Super Tuesday primaries. Pete Buttigieg dropped out a day earlier.

As a result, hundreds of thousands of early voters in those states—including 455,000 in Texas and California—wound up wasting their votes on withdrawn candidates, effectively disenfranchising themselves by voting early.

Something similar can also happen during general elections.

We all know that information about candidates, sometimes scandalous information, often comes out just before Election Day. If that information is relevant to a voter’s choice and that voter has already early voted, there is nothing she can do to recall or change her vote.

Moreover, studies have shown that early voting actually hurts turnout; it does not increase it.

Yet another bad provision in the Klobuchar/Wyden bill would “guarantee” that all voter registrations submitted 21 days before the election must be “deemed valid.”

States have varying registration deadlines, ranging from 30 days before an election to registration on Election Day.  Those deadlines reflect the varying amounts of time it takes for states to check the validity and accuracy of voter registration information. (Typically, the larger the jurisdiction, the longer this process takes.)

But this bill apparently takes away the right of states to do any verification at all. Rather, it says states must consider as “valid” any voter registrations they receive—even if officials know the individual is ineligible to vote because he is a felon, an alien, or doesn’t actually live where he claims to reside.

Hopefully, given all of the measures being put in place by the federal, state, and local governments, this health threat will have peaked and subsided long before the Nov. 3 election.

A spokesman for the National Association of Secretaries of State says that the secretaries—who are in charge of administering elections in their respective states—are “closely monitoring COVID-19 public health alerts, working with their state public health departments, and assessing their state emergency preparedness plans.”

State election officials already have all of the legal authority they need, as well as the detailed knowledge and experience to administer their elections even under extraordinary conditions.

The last thing we need is federal interference from Washington bureaucrats and political know-it-alls who think they can do it better.