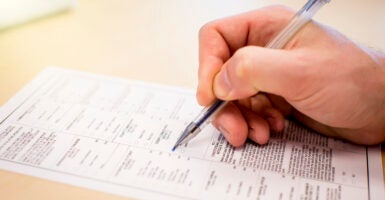 Prosecutors in Texas charged one man with 84 counts of mail ballot application fraud and 25 counts of unlawful possession of an official mail ballot. Pictured: A voter fills out an absentee ballot. (Photo: Getty Images)

However, Texas state and local law enforcement officials allege that Mohamed’s illicit activities ran far deeper than what he was caught in the act doing.

If convicted, he faces up to 20 years in prison.

Carrollton, with a population of about 127,279, spans the counties of Denton, Dallas, and Collin.

Texas officials allege that Mohamed obtained a virtual mailbox using a false identity. Then, prosecutors say, he forged at least 84 voter registration applications for unwitting residents of Denton County. The absentee voter applications asked for ballots to be sent to a fraudulent location.

Paxton said law enforcement is committed to “ensuring a free and fair presidential election in the face of unprecedented voter fraud.”

“Mail ballots are inherently insecure and vulnerable to fraud, and I am committed to safeguarding the integrity of our elections,” Paxton said in a written statement. “My office is prepared to assist any Texas county in combating this form of fraud.”

In late September, a grand jury indicted Gregg County Commissioner Shannon Brown and associates, alleging a scheme that involved falsely claiming that voters were disabled in order to obtain absentee ballots. Brown had won a five-vote victory in a Democratic primary in March.

In 2019, prosecutors indicted Edinburg Mayor Richard Molina and 18 others on charges they violated Texas law against ballot harvesting.