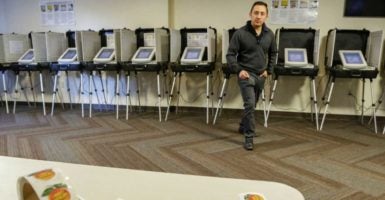 Georgia was among the Super Tuesday states to vote on March 1. (Photo: Erik S. Lesser/EPA /Newscom)

Two complaints of vote buying, four complaints of felons voting or registering to vote, and a voter registration under the name of a dead person are among the matters Georgia Secretary of State Brian Kemp’s office is reviewing.

Many of the 18 complaints filed in 2016 came through the office’s “Stop Voter Fraud” website and hotline in a year when the state of Georgia finds itself in a role it hasn’t been in for two decades—a presidential battleground.

On the flip side, this has prompted groups from the left such as Common Cause, Project Vote, and the NAACP to hit Georgia with litigation against the state and individual counties.

The stakes are higher now in the Peach State than in past election cycles. Last year, 15 Georgia counties reported suspected voter registration fraud.

It’s no coincidence that the litigation is hitting Georgia in what could be a decisive state, said Kim Hermann, senior counsel for Southeastern Legal Foundation, an Atlanta-based legal group that has filed briefs on behalf of the state of Georgia.

“Voter rolls should be cleaned up to make sure they are accurate.”– @HvonSpakovsky

“The claims are frivolous and without merit,” Hermann told The Daily Signal in a phone interview. “What we are going to see is a repeat of the voter ID challenges we saw four years ago. Those lawsuits were thrown out because the challengers could not produce anyone who was actually denied access to the ballot, and these ones will be thrown out for similar reasons.”

Project Vote, a Washington-based group, is seeking the release of documents from the Georgia secretary of state’s office describing why some voter registration forms were rejected.

“Secretary Kemp is illegally preventing us from figuring out just what exactly Georgia has been doing with its voter rolls,” Michelle Kanter Cohen, election counsel for Project Vote, said in a statement. “With a presidential election just months away, we’re not willing to wait any longer, and the voters of Georgia can’t afford to wait.”

Kemp spokesman Candice Broce contends the office has been “cooperative and transparent” with Project Vote.

“We have dedicated a substantial amount of time and resources to gather information for this organization, and they have received the information free of charge,” Broce told The Daily Signal in an email. “It is disappointing that Project Vote has resorted to this unnecessary measure when our office has acted in good faith throughout the entire process. It is a shame that taxpayer resources will have to be used to defend this unnecessary lawsuit.”

For the first time in 20 years, Georgia’s 16 electoral votes are at play. The last Democratic presidential candidate to win the state of Georgia was Bill Clinton in 1992. He lost the state in 1996 to Republican Bob Dole. President George W. Bush twice won the state by double digits, while John McCain and Mitt Romney carried the state by a comfortable margin. This year, Democrat Hillary Clinton leads Republican Donald Trump in the most recent polling of the state, after trailing him for months.

In announcing the lawsuit in February, Georgia NAACP President Francys Johnson said removing voters is based on partisanship.

“This isn’t the first, second, third, or even the fourth time that Kemp has put partisan politics over Georgians’ right to vote,” Johnson said in a statement. “Now Kemp is illegally kicking certain citizens off of voter rolls.”

Kemp spokesman Broce was dismissive of the lawsuit by Common Cause and the NAACP.

“As we have stated all along, the lawsuit is completely without merit and frivolous,” she told The Daily Signal in an email. “The Georgia Department of Law has clearly explained to plaintiff’s counsel multiple times that Georgia law is consistent with the NVRA [National Voting Registration Act].”

The two state cases on the voter registration rolls come amid a lawsuit in Hancock County, Georgia, that has gained significant national attention relating to cleaning up the voter rolls locally.

This week, a coalition of legal groups also filed a lawsuit against Gwinnett County, Georgia, that charged racial bias in the makeup of districts for local elections.

The secretary of state’s office has a thorough process for investigating allegations of voter fraud, Broce said. The biggest category of fraud usually comes in the form of misuse of absentee ballots, she said.

Several complaints were either dismissed or are still pending. If a violation is found, depending on its seriousness, the secretary of state’s office will either send a letter of instruction to the voter or the local elections officials, or make a referral to the state attorney general’s office for investigation.

According to information provided by the secretary of state’s office, the most recent case to be referred to the attorney general was an unqualified voter allegedly attempting to register in 2014 and a convicted felon attempting to vote that same year. A probate judge in 2012 also found that a third party was bringing in numerous registration forms that included the names of residents outside the county as well as convicted felons.

“There could be an indirect tie to the elections this year in filing lawsuits and mobilizing members of a minority community,” Charles Bullock, a University of Georgia political science professor, told The Daily Signal in a phone interview. “If there is a perception that someone is trying to keep you from voting, then it’s a human tendency to say ‘If someone tells me I can’t do it, then by God, I’m going to do it.’”

Georgia’s voter ID law has been in place since 2007. Voter participation among African-Americans actually increased in Georgia in presidential elections and in the midterm elections, Bullock said.

A 2012 Heritage Foundation analysis had similar findings regarding Georgia’s voter ID law, showing from 2004 to 2008, the African-American turnout increased by 42 percent and the Hispanic turnout increased by 140 percent. In a comparison between the 2006 and 2010 midterms, African-American turnout jumped 44.2 percent and Hispanic turnout was up 66.5 percent. Further, fewer than 1 percent of the state’s population had to obtain an ID to vote, as most residents already had some form.

The report’s author, Hans von Spakovsky, a senior legal fellow at The Heritage Foundation, said the allegations in the Georgia voting litigation are unproven.

“Fortunately, they have the ability to prove their claims in court—and if proven, then any attempted voting discrimination will be stopped,” he said in an email response. He added, “Voter rolls should be cleaned up to make sure they are accurate and not full of duplicate registrations or ineligible voters such as noncitizens.”

Von Spakovsky said that the 2013 Supreme Court ruling that determined states no longer had to gain federal approval before changing election laws did not affect the National Voter Registration Act that governs cleaning up voter rolls.

Federal law requires that states clean their voter rolls. Georgia has a process that removes people from the list if they had no contact with Georgia election officials for the past four election cycles, or seven years, and failed to return a prepaid, pre-addressed card confirming their address.

“Georgia does far more to find its registered voters than what is required by federal law,” Hermann, Southeastern Legal Foundation senior counsel, said of Georgia.