100 Years After the 19th Amendment, Pro-Life Women Are Still Treated as Unequal 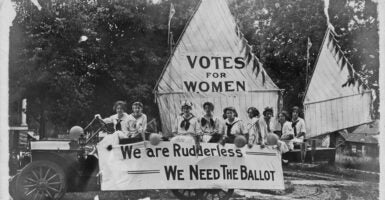 Young female suffragists, wearing sailor costumes and seated on a float decorated to resemble a boat, advocate for granting women the right to vote in this photo from 1900. It would be another 20 years before that happened. (Photo: Ken Florey Suffrage Collection/Gado/Getty Images) 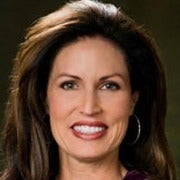 The fact is, many on the left want to exclude pro-life women from this year’s milestone celebration of the success of the suffragists. They bristle at the thought of us having an equal claim to the women’s rights movement. They equate being pro-life and female as somehow being self-hating and opposed to the full equality of women.

Therefore, in their minds, we—and the millions and millions of women around the country like us—are not fully equal … to them.

However, abortion is not the litmus test for feminism. If it were, then those on the left might be surprised to find out that most of the women who led the fight for suffrage would have been excluded from the movement, and women’s suffrage might have eluded us to this day.

They were fighting for access to higher education, the right to own property, economic freedom, the ability to enter into contracts, and other basic rights that they were so often denied.

It was a desperate battle that became the longest-running social movement in American history.

While the early feminists fought for many things, they didn’t fight for abortion. And while they fought for women to have more control over their own lives, they didn’t consider taking the lives of their own children as a key to their independence.

In fact, many of the early suffragists are quoted as condemning abortion and considered it an offense against women and their children.

Suffragist Alice Paul, for example, said abortion was “the ultimate exploitation of women.”

In high school, we all learned about Victoria Woodhull, who became the first female candidate for president in 1872 to raise awareness for women’s suffrage. Woodhull called abortion “murder” and said that women would only commit such an act when they were in a “demoralized condition.”

Two of the most famous leaders of the suffrage movement, Susan B. Anthony and Elizabeth Cady Stanton, published The Revolution, a women’s rights newspaper. The newspaper frequently published editorials forcefully opposed to abortion. Anthony denounced abortion along with a list of other evils such as murder, infanticide, adultery, and rape in her famous speech “Social Purity.”

Stanton, a social activist, abolitionist, and suffragist, believed that abortion was used to oppress women, not lift them up. She called it “a crying evil” and said that giving women the right to vote was one way of actually helping to end abortion.

She and other suffragists reasoned that when women could vote, they could end unjust laws that allowed husbands the sole discretion of deciding when their wives would become pregnant. Ending “forced maternity” by domineering husbands would do much to end women seeking abortions.

These women and many other leaders of the suffrage movement recognized the value of every human life and that one group’s rights could never be built by destroying another’s.

Many modern feminists claim that abortion is empowering for a woman, giving her the ability to decide whether and when to have children. But early feminists would find it ludicrous to claim that becoming empowered meant taking another’s life and denying something that makes her uniquely female—her ability to be a mother.

Today’s pro-life women believe in the intrinsic value of every human life and the equal rights of every human being, whether born or unborn. As such, we continue the fight for human rights and social reform in the image of the original suffrage movement until all are recognized as equal.

That means pro-life women have just as much—if not more—of a claim to that history as any other woman.

In the words of the original suffragists, we “shall not be denied.”