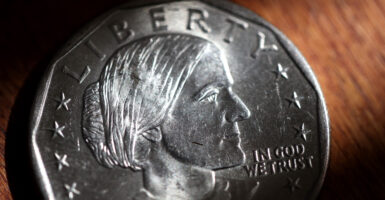 President Donald Trump issued a posthumous pardon Tuesday to celebrated women’s suffragist Susan B. Anthony to mark the 100th anniversary of the 19th Amendment to the Constitution recognizing the right of women to vote.

Anthony was arrested in 1872 for voting in an election at a time in America when only men could vote. She was indicted, convicted of illegal voting, and sentenced to pay a fine of $100 and court costs.

Earlier Tuesday, Trump signed a proclamation declaring August to be National Suffrage Month. During that event, Trump first said he would sign a “full and complete pardon” for Anthony, who died in 1906.

“She was never pardoned. Did you know that?” Trump said. “What took so long? She was [found] guilty for voting and we’re going to be signing a full and complete pardon.”

Marjorie Dannenfelser, president of the pro-life Susan B. Anthony List and a member of the Women’s Suffrage Centennial Commission, celebrated the pardon and attended the earlier event.

“Susan B. Anthony fought to expand the promise of human rights and dignity to all people,” Dannenfelser said in a written statement, adding:

She and her compatriots provide us with the model of how to advocate for the voiceless and disenfranchised in our own time. It is her courageous example that inspired the formation of SBA List and continues to inspire our work today. We are deeply moved and grateful to President Trump for honoring the legacy of this great American hero and we pledge never to tire in carrying on her unfinished work.

As leader of the National Woman Suffrage Association, Anthony unsuccessfully lobbied for women’s right to vote to be included in the platform of the 1872 Republican National Convention, which nominated President Ulysses S. Grant for a second term.

The platform included softer, ambiguous language about the party’s “obligations to the loyal women of America for their noble devotion to the cause of freedom” and hope for “their admission to wider fields of usefulness.”

Anthony also reached out to the Democrat-endorsed candidate newspaper editor and publisher Horace Greeley, presidential nominee of the Liberal Republican Party, who outright rejected the notion of women’s suffrage.

Anthony voted for Grant and the Republican ticket in the election on Nov. 5, 1872. She was arrested two weeks later.

Two young men who registered Anthony to vote were interviewed for a hearing to determine whether she broke the law.

Her two-day trial in June 1973, Anthony said, was “the greatest judicial outrage history has ever recorded.”