100 Years Ago, the House Voted for Women’s Suffrage. Here’s the Back Story. 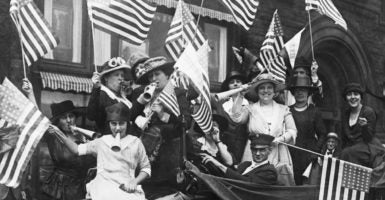 It’s been nearly a century since the 19th Amendment was ratified, granting women the right to vote.

As the House of Representatives celebrates its role in starting the amendment process this week, it’s worth examining how and why the 19th Amendment became the law of the land.

Support for the measure did not occur overnight—passage was a slow, gradual process. But what many don’t appreciate is that the 19th Amendment, though a landmark achievement, did not represent the beginning of female political power in America. Instead, its passage showed that women already wielded widespread influence in society even before they were guaranteed the right to vote.

Generations of Americans laid the groundwork for the amendment’s adoption as state after state granted women the right to vote. That trend culminated in a national amendment because an overwhelming majority of Americans—both men and women—became convinced that it was necessary.

It would be a mistake to think that Thomas Jefferson’s line in the Declaration of Independence, “all men are created equal,” simply meant equal rights for males and not females.

Rights guaranteed under the Constitution—such as the rights of free speech and the right to bear arms—applied equally to men and women alike with no qualification from the very beginning.

What was often restricted in our early history were civil rights for women—like voting and running for office.

But, contrary to popular opinion, that exclusion was not absolute. Many women in certain states were allowed to vote prior to the 19th Amendment, even before the adoption of the Constitution.

According to historian Thomas G. West, New Jersey’s 1776 constitution gave the franchise to all inhabitants “of full age, who are worth 50 pounds proclamation money, clear estate in the same, and have resided within the county in which they claim a vote for 12 months immediately preceding the election.”

This allowed women to vote throughout the state, a policy that was reinforced in 1790 when the constitution was revised to add “he or she” to the language on voting rights. The law was deeply expansive for its time, allowing both women and black citizens the right to vote. Unfortunately, those provisions regarding women and black citizens were rolled back during a fierce partisan battle in the state in 1807.

According to West, women were voting outside New Jersey—including on the local level in Massachusetts—as well during this era. Interestingly enough, in the early 19th century as voting rights expanded for non-property holding white males across America, voting rights occasionally decreased for women, as in the case of New Jersey.

During this era, women voted in small numbers compared to men, since they could only vote in New Jersey and a few towns dotting the American landscape. But while the franchise wasn’t universal, there was no serious movement to make it so.

That would change in the mid-19th century.

In the mid- and late-19th century, the women’s rights movement began to coalesce around three big agenda items: the abolition of slavery, equal treatment of women under the law, and temperance, which at the time was a growing movement.

Perhaps the most important precursor to the passage of the 19th Amendment was the Seneca Falls Declaration of 1848, passed at a women’s rights convention attended by many anti-slavery abolitionists.

Some of the most famous women in American history attended that convention, including Lucretia Mott, an abolitionist Quaker and leading social reformer in her day, and Elizabeth Cady Stanton, another abolitionist and women’s suffrage activist who did more than anyone to lay the groundwork for the 19th Amendment.

Among the most hotly contested provisions in the Seneca Falls Declaration was the call for women to secure the right to vote. That provision was eventually included thanks to the support of Frederick Douglass, the famed abolitionist.

Stanton would spend the rest of her life building momentum for women’s voting rights. She co-authored the six-volume “History of Woman Suffrage,” along with other leading women’s rights activists, including Susan B. Anthony.

Anthony’s work in particular was so critical to the passage of the 19th Amendment that it was actually called the Susan B. Anthony Amendment, even though it passed in 1919, more than 10 years after her death.

It was during Anthony’s lifetime that many states, especially Western ones, began to guarantee women’s voting rights.

Wyoming’s law dated back to 1869 when it was still a territory, and several other Western states passed suffrage laws for women in the late-19th century.

These laws reflected, in part, a growing desire of less populous Western states to up their voting strength relative to the more populous Eastern states. But they also reflected the power of highly organized local women’s suffrage organizations that fed off of the arguments made by Stanton, Anthony, and other leading voices of their national movement.

Passage of the 19th Amendment

By the early 20th century, Americans became overwhelmingly convinced that it would take a constitutional amendment to secure women’s suffrage. This was due in part to a Supreme Court ruling in 1875, which said that equal protection under the 14th Amendment did not apply to women. After that ruling, a number of states continued to deny women the vote.

The amendment process began in 1878, when Sen. Aaron A. Sargent, a Republican from California, introduced what would become the 19th Amendment. In the decades that followed, momentum built across the country to fix what many Americans saw as a flaw in their system.

On May 21, 1919, the amendment finally passed in the House and was shortly thereafter passed in the Senate. It was then passed by three-quarters of the states and went into law in 1920, just in time for the presidential election.

The right of citizens of the United States to vote shall not be denied or abridged by the United States or by any State on account of sex. Congress shall have power to enforce this article by appropriate legislation.

The 19th Amendment is a textbook example of how the amendment process is designed to work. In a sense, it should serve as a rebuke to those who today want to effect sweeping constitutional changes outside the carefully crafted amendment process.

Fundamental changes to our Constitution are meant to come about only as a large majority of the public come to embrace them. That’s the story of the 19th Amendment.