The False Premise of the Equal Rights Amendment 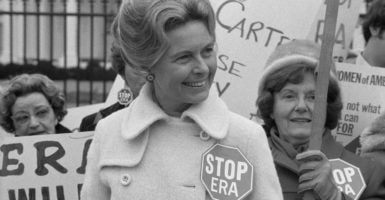 The idea that the Constitution doesn’t protect equal rights for women, or that the Founders didn’t include women in their views about individual rights, is completely wrong.

Unfortunately, some self-described members of the “Me Too” movement have embraced the so-called Equal Rights Amendment to “fix” the Constitution, including actress Alyssa Milano, who spoke at rallies to generate support in New York City and Washington, D.C.

Illinois recently became the 37th state to ratify this proposed constitutional amendment, which says, in part: “Equality of rights under the law shall not be denied or abridged by the United States or by any State on account of sex.”

The amendment has been a huge issue for the left for quite some time. In 2014, Supreme Court Justice Ruth Bader Ginsburg called it her most favored addition to the Constitution.

“If I could choose an amendment to add to the Constitution, it would be the Equal Rights Amendment,” Ginsburg said. “ … I would like my granddaughters, when they pick up the Constitution, to see that notion—that women and men are persons of equal stature—I’d like them to see that is a basic principle of our society.”

Ultimately, attempts to pass the Equal Rights Amendment are mostly symbolic for now.

Passage of a constitutional amendment requires 38 states to ratify it. This seemingly puts the Equal Rights Amendment one state away from passage—but most of the other states ratified the amendment in the 1970s, and five actually rescinded their vote (Nebraska, Tennessee, Idaho, South Dakota, and Kentucky).

When Congress passed the Equal Rights Amendment in 1972, it insisted that the amendment be ratified by the states by 1982, that is, within 10 years.

Only 35 states ratified the amendment by the deadline. It’s likely those states will have to re-ratify the amendment for it to pass.

The Equal Rights Amendment is likely a ways away from passing, but it’s worth noting the false premise it’s built on

Many on the left charge that the Constitution doesn’t protect equal rights for women. But that is simply incorrect, and it is misleading to portray the document as inherently sexist.

As historian Thomas G. West wrote in his book “Vindicating the Founders: Race, Sex, Class, and Justice in the Origins of America,” it’s incorrect to claim that the founding documents are inherently sexist.

“The word ‘men’ in the Declaration [of Independence] means mankind, human beings, male and female, or whatever color or race,” West wrote.

While the Founding Fathers certainly didn’t have modern views about the equality of men and women, that is not to say that they did not believe that women, too, qualified for the basic rights and dignities that the new country would be founded upon.

West noted that Thomas Jefferson, author of the Declaration of Independence, explained in his famed “Notes on the State of Virginia” that only a barbarous society would deny women their equal, God-given rights.

In recognizing these rights, Jefferson explained, however, we must recognize that men and women are different.

This created some problems for early proponents of an Equal Rights Amendment in the 1920s. Many women, especially those working in blue-collar industries, feared they would lose special protections designed for women and mothers working in industries requiring manual labor.

“Civilized men, in Jefferson’s view, do not abuse their superior natural strength. They treat women as free beings, not as slaves compelled to toil for their male masters,” West wote.

Civilization, Jefferson wrote, “first teaches us to subdue the selfish passions, and to respect those rights in others which we value in ourselves. Were we in equal barbarism, our females would be equal drudges.”

The Constitution, following this line of thinking, makes no distinction between men and women.

“Whenever the Constitution speaks of ‘privileges guaranteed to individuals,’ women are always included by clear implication,” West wrote. “Or are we to assume that the constitutional guarantee of ‘the privilege of the writ of habeas corpus’ means that women (but not men) may be imprisoned but not charged with a specific crime? … Obviously not.”

From the time of the nation’s founding, women could give equal testimony in court, own property, and even vote in some states.

While the 19th Amendment guaranteed the right to vote nationally, many states allowed women to vote long before the law went into effect in 1920.

In fact, New Jersey allowed women to vote in the 1790s, in an era in which voting was restricted for some men, such as nonproperty holders. Many Western states in particular opened up voting to women in the 19th century.

Ultimately, the passage of the Equal Rights Amendment likely would cause more problems than it would solve, even for the people who have become proponents.

It would mean that women would have to be registered for the military draft, for one, and could eliminate laws that benefit women, such as alimony.

The late conservative activist Phyllis Schlafly, who was instrumental in killing the Equal Rights Amendment in the 1970s, wrote in 2007 that it would “[A]bolish the presumption that the husband should support his wife and take away Social Security benefits for wives and widows.”

“It would also give federal courts and the federal government enormous new powers to reinterpret every law that makes a distinction based on gender, such as those related to marriage, divorce and alimony,” Schlafly wrote.

The concerns of the Me Too movement have more to do with culture than anything else, and while the Equal Rights Amendment is unlikely to turn the Harvey Weinsteins of the world into angels, the goal of many of its advocates is to codify the most extreme elements of the sexual revolution into law.

Pro-life groups worry that the Equal Rights Amendment could be a method to add a constitutional right to taxpayer-funded abortion.

Some proponents of the Equal Rights Amendment have argued that putting any limitations at all on abortion would be in violation of the amendment and a form of sex discrimination.

Certainly, adding abortion-neutral language to the proposed amendment has been met with fierce opposition in the past.

National Review’s Alexandra DeSanctis, a conservative columnist, explained why the Equal Rights Amendment is both useless regarding the specific concerns of the Me Too movement and dangerous when it comes to the Constitution.

If they get their way, it will no longer be the Department of Health and Human Services forcing employers to subsidize contraceptives and abortifacients; it will be the Equal Rights Amendment. When the giants of the abortion industry insist that Congress use taxpayer dollars to fund abortions, they will come carrying a copy of Madison’s founding document. Every demand for complete sexual libertinism, facilitated by the state, will suddenly have behind it the imprimatur of the U.S. Constitution. That’s what they’re after.

Schlafly and a powerful contingent of social conservatives, led by traditionalist women, killed the Equal Rights Amendment even in the culturally heady days of the 1970s, and it should remain a dead issue.

The Constitution already protects equal natural rights for women. There’s no need to revise the document to include a weapon for left-wing social engineering on a national scale.