Why China’s Food Crisis Could Get Worse Amid Pests, Pestilence 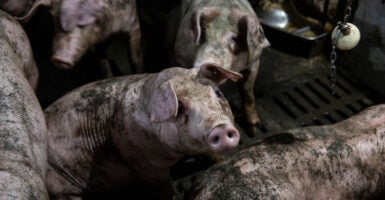 For the past 18 months, China’s farm and agriculture sectors have been pummeled by two different infestations.

African swine flu has killed millions of hogs as it’s spread south through China. Fall armyworms and locusts marched north, devouring millions of acres of crops along the way.

Recent mass flooding in China’s southern region and a new Chinese Communist Party edict calling on citizens to waste less food suggest China’s food crisis may be far from over.

African swine flu is an incurable and fatal disease that affects all pigs. The fall armyworm is an invasive, omnivorous insect that can consume large amounts of crops—including corn, sorghum, rice, and cotton—in a very short amount of time.

The price of fresh vegetables is up 8%.

Recent rain and flooding around China’s Yangtze River have affected 13 million acres of cropland, causing $21 billion in damages. It’s also made curbing the spread of African swine flu more difficult, as new cases are being reported.

These incidents led China to significantly increase its imports of foodstuffs.

Imports of oil seeds (including soybeans) is up 117 billion renminbi (about $16.9 billion).

Although there’s nothing wrong with importing food, it just goes to show that China’s domestic farms are having their troubles.

The impact of recent flooding, on top of last year’s African swine flu epidemic and fall armyworm infestation, has spooked the Chinese Communist Party all the way to its highest level.

That immediately led to food associations’ encouraging restaurants to sell less food to customers. It also led one restaurant to weigh incoming customers to help determine how much food they should eat.

Xi’s announcement also prompted TikTok’s sister app in China, Douyin, to issue a statement saying it would “penalize food-wasting behavior when spotted.” That will effectively mean the end to short, food-eating videos that are popular in Asia.

The increase in food prices also makes China’s recovery from the COVID-19 recession that much harder, as families are having to spend more of their incomes on necessities such as food instead of retail items.

China’s retail sector is still in the red as private demand has yet to fully recover.

Retail sales of apparel, jewelry, automobiles, audiovisual equipment, and household appliances are all down by double-digit percentages this year.

A silver lining from China’s growing need for food imports is the U.S.-China Phase One deal. The increased demand for food may help U.S. farmers who are hoping China can live up to the additional $12.5 billion in agriculture purchases Beijing has promised to make this year.

Although the current crisis is unlikely to get as bad as China’s famine in the 1950s that saw as many as 30 million die under the leadership of Chairman Mao Zedong, the increasing prices and excessive crackdown on food consumption doesn’t bode well for China’s internal political stability.