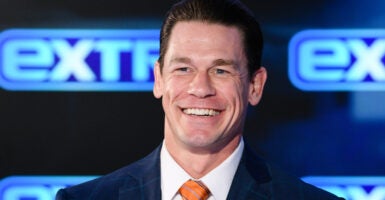 "John Cena and every Hollywood actor that bends the knee like him ...should be required to get a tattoo across their forehead ... 'Made In China,'" writes Scott Ward. Pictured: Cena, who recently apologized after calling Taiwan a country, visits "Extra" on Jan. 15, 2020 in Burbank, California. (Photo: Noel Vasquez/Getty Images)

Editor’s note: This week, we’re sharing your thoughts on a cowardly celebrity, how to tackle homelessness, and applause for a teacher outing classroom wokeness. Want to sound off? Email us at [email protected], and we’ll consider your letter for publication in a future edition of “We Hear You.”—Katrina Trinko

Dear Daily Signal: Having been long been a fan of Thomas Sowell’s work I am delighted at the prospect of reading  “Maverick,” Jason Riley’s new biography. I look forward to his overview of Sowell’s brand of fact-driven reality (“Jason Riley Examines ‘Maverick’ Who Is Thomas Sowell“).

It brings to mind a timely antidote for the most pernicious poison taking hold in our country—the teaching of critical race theory in our schools and colleges, to say nothing of our corporations and military.

What if there were an alternative course based on the teachings of Martin Luther King Jr. with the powerful addition of Sowell, Walter Williams, and Maya Angelou? It could focus on the upside—peace, harmony, beauty and reality.

Notice that there is no upside with critical race theory. All it does is tear down tradition and try to replace it with anger, myth, ignorance, and hate. Words that describe critical race theory are mostly dysfunctional: disrupt, disdain, disrespect, destroy, discount, disorder, disturb, disarray, disable, disparage, dissolve, disassemble, and dystopian. Hardly something my grandchildren should have to endure.

As a teacher I was coached to “never leave the wrong answer on the blackboard.” Critical race theory clearly is such a wrong answer. Let’s build the right answer on Drs. King and Sowell. One can dream.—Gordon White

Thomas Sowell is another Winston Churchill; his short remarks instantly get to the issue. His writings should be required reading in every liberal arts school.—Dave Norby, Sun Prairie, Wis.

Dear Daily Signal: It was with great interest that I read Christopher Rufo’s commentary “Does ‘Housing First’ Help Homeless? Here’s What Happened in Los Angeles.”

The story took me back to my working days with a local coastal municipality in San Diego County, California.  During my last thirteen or so years with the city I was immensely involved with writing contracts with nonprofit developers of housing for very low-, lower-, and low-income households, and the homeless and downtrodden populations.

As a taxpayer I never got over the excessive per unit cost and low-end quality of fixtures that these developments delivered. All of the complexes had government-subsidized funding attached, with the largest amounts coming from various local agency funding sources, California housing bonds, and in some cases federal Housing and Urban Development funds, and homeless veteran funds. Very little developer money, usually in the low $100,000s, was involved. The construction costs associated with these complexes ranged from $13.8 million to $81.8 million, with each dwelling unit costing between $216,200 to $428,800.

Of course the leftist housing advocates never batted an eye over the extraordinary per unit cost associated with these low-income housing complexes. It wasn’t their money so why care was the resounding attitude.

The subsidy money would be paid back over a period of time, usually over a term of 55 years or longer. Payments would be made from residual receipts from the letting of the dwelling units, with the local agency being the last in line to get paid, if at all. In some instances the balance of the local agency loan would bear no interest and be forgiven after the initial term.—William F. Marquis, Pahrump, Nevada

The proponents of Housing First are naïve, if not foolish.  They succumbed to the vanity of thinking that they could do public housing better than generations past.

Why else does every generation seem to think that socialism failed before because of poor execution?  Socialism fails because it is based on spending someone else’s money on someone else. That’s a type four expenditure per “Free to Choose” by Milton and Rose Friedman.

It is sure to be expensive and wasteful. In the aggregate, it is as durable as the second law of thermodynamics—that is, heat always invades the cold.  Always!

Dear Daily Signal: I was so happy to learn about The Heritage Foundation’s Election Fraud Database in John Malcolm’s commentary (“No One Knows Full Extent of Election Fraud. That’s Why We Track It.“) and know that the very serious problem is not being forgotten.

Malcolm’s commentary was very clear in noting the inaccuracies in the article [by Kansas City Star columnist Charles Hammer] as well as so clearly outlining the objective purpose of growing and maintaining a database which legislators will hopefully learn from and refer to in correcting their state’s election laws.—Carl Voorhees, Chestertown, N.Y.

I felt compelled to weigh in on the article about election fraud. In my humble opinion, this is the most important issue facing America today. Without fair, honest, and trustworthy elections you don’t have America.

For the first time in my adult life, I am now questioning why I would bother to vote in future elections.  Even I can see that the system is fraught with holes to the extent that there is now very little integrity left in the election system.

States must require a valid, government-issued ID for voting, whether in person or by absentee ballot. General mail-in voting must end. Outside organizations must be barred from funding or participating in the count and no counting should take place unless observers from both parties are present. Ballot harvesting must be outlawed.

Do these things and I may vote again. Without them, why bother?  It won’t matter in a “rigged” process.

I can’t be the only one that feels this way.—David E. Lewis

Dear Daily Signal: Fantastic article! This is how we pay the piper for ceding our place as the world’s foremost industrial power and producer (“John Cena’s Groveling to China Previews World Where We Must Live by Lies.”)

John Cena and every Hollywood actor that bends the knee like him, along with LeBron James and company, should be required to get a tattoo across their forehead that advertises what nearly everything sold at Walmart has stamped on the bottom: “Made In China.”—Scott Ward, Midlothian, Va.

At some point there needs to be a distinction between the Chinese Communist Party and the Chinese people. The kowtowing by John Cena and others only emboldens the repressive regime.

The notion that “a rising China would be good for all” was good in intent but terrible in implementation. It was based on the false idea that America was great because she was prosperous. American greatness is a byproduct of the “idea” of America—private property, the rule of law, and freedom of contract.

It was the courage of the people in this former colony that enabled them to pledge their lives, their fortunes, and their sacred honor to battle (with support from other countries) a tyrannical government and form a new nation. The Chinese people should be encouraged and supported.—Phillip Madonia, Mobile, Ala.

Dear Daily Signal: Hooray for this young man (“This Teacher Is Taking a Stand to Stop the Left“) exposing this woke information as it really is: a deplorable movement designed to brain wash impressionable children into a life style that is personally detrimental to their maximum potential as human beings! —Dennis M. Evans, retired Arizona school administrator