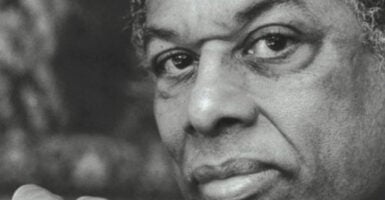 Black leaders of the past such as Frederick Douglass and Booker T. Washington “shared [Thomas] Sowell’s deep skepticism of government benevolence and the lowering of standards to facilitate black advancement,” Jason Riley writes in a new biography of the economist. (Photo: Detail from book cover/Basic Books)

Sarah H. Weaver is a graduate student at Hillsdale College and a freelance writer.

In an interview in 2018, the economist Thomas Sowell had a concise answer when podcaster and commentator Dave Rubin asked what awakened him to the failures of Marxism, an ideology he had espoused in his youth.

In his decadeslong career, Sowell’s commitment to the facts at the expense of popular approval and, sometimes, career advancement has captured audiences young and old, black and white, rich and poor.

But Sowell isn’t much concerned with his fame, even if it is an encouraging indicator of how well his ideas have been received.

What Sowell really wants is for his ideas to be remembered.

“I’m not sure I want to be particularly remembered. I would like the ideas that I’ve put out there to be remembered,” he said in another interview.

Now, still writing bestsellers at 90 years old—his latest book, “Charter Schools and Their Enemies,” was published last June—Sowell seems to be getting his wish.

In commentator and author Jason L. Riley’s new book “Maverick: A Biography of Thomas Sowell” (Basic Books), his intellectual history and significance get an exhaustive assessment. The book is “primarily an intellectual biography,” Riley writes, “meaning that my focus is on the author’s scholarly output, not his life story.”

And this book by Riley, a member of The Wall Street Journal’s editorial board, delivers on its promise. Despite what the title may intimate, this is not a traditional biography, but a contextualization of Sowell’s ideas within the contemporary circumstances to which he responded—circumstances that seem shockingly like those we face today—and the intellectual tradition he inherited and enriched.

Riley’s “Maverick,” out May 25, serves well as an intellectual biography. For the careful student of Sowell, the book can be a predictable, albeit enjoyable, read. For the individual less familiar with the economist’s writings, the book serves as a useful method to pique interest in the political and economic thought of arguably our greatest living intellectual.

Sowell’s ideas are meant for the layman’s consumption, indicative of his discontent with the high-minded hypotheses of the intellectual elite. His contempt for the “intellectual fads that so often animate academics and the media” is tied up with his famous allegiance to the facts.

Always the maverick, Sowell was never one to keep his views well hidden. During his time at Cornell University, the intellectual establishment made it quite clear there wasn’t room in its gilded halls for a man like Sowell.

Sowell left Cornell, Riley writes, because he “had no more patience for the lies, the deceit, and the inclination among his peers to do the expedient thing instead of the right thing.” Sowell was “far more interested in learning the facts” than cultivating popular approval.

Sowell’s few friends in the academy thought he would be better off focusing on less controversial topics such as economics and intellectual history, “while avoiding racial topics.” Undoubtedly, Sowell would have excelled making a career out of discussing only these two topics, Riley writes, but he “didn’t feel he had that luxury.”

As a black man raised in the era of Jim Crow, Sowell had his own experiences with racism, experiences that led to his frustration with black intellectuals who were, in his view, “too concerned with white approval.”

Sowell thought the key to black achievement was not special treatment or government intervention, but access to rigorous and high-quality education and a careful fostering of the values of hard work and individualism. In fact, lowering standards to help blacks is not only discriminatory but detrimental to black achievement, Sowell believed. He quipped: “I’m old-fashioned enough to be against [affirmative action] simply because it is wrong.”

Sowell’s moral and factual objections to affirmative action policies were vindicated by his own experience in academia. While recruiting black students for a summer program at Cornell, he found that there were plenty of amply qualified black students for the program, if only the elite academics of Cornell cared to look.

Cornell, like other schools, had argued that it had no choice but to lower standards and focus on ‘high risk’ prospects to diversify the campus because there weren’t enough black students who otherwise would qualify for admission. But Sowell’s recruitment efforts for his summer program had clearly undermined such claims.

Here, Riley makes another clear connection between Sowell’s “facts on the ground” experience and his academic analysis of these issues.

To be a conservative who is black is to expose oneself to undue amounts of absurd criticism, and Sowell’s experience was no exception.

Riley writes that Sowell and the late economist Walter Williams, a protegee and friend of Sowell’s, used to joke that “they never flew together, because if the plane went down there would be no black conservatives left.”

But Sowell had “felt the pain and humiliation of racism firsthand throughout his life,” and “needed no lectures from anyone on the evils of Jim Crow,” Riley writes.

For instance, many claimed that Sowell’s book “Ethnic America: A History” argued that discrimination against blacks did not exist. But Sowell actually was arguing that “discrimination alone was an insufficient explanation of social inequality.”

Sowell, a senior fellow at Stanford University’s Hoover Institution since 1980, certainly was not a pawn of white economists, even the ones he admired and learned from.

Milton Friedman, a friend and mentor, said that Sowell “has a mind of his own, insists on making it up for himself, and on getting the evidence necessary to form a valid judgment.” In fact, Sowell saw his views on racial matters as entirely in line with that of black civil rights leaders of the past.

“If anything,” Riley writes, “Sowell’s analyses are in the tradition of his fellow black forebearers, not his white contemporaries.” Black leaders of the past such as Frederick Douglass and Booker T. Washington, he writes, “shared Sowell’s deep skepticism of government benevolence and the lowering of standards to facilitate black advancement.”

“I’m sure that at least 95% of the people in this country have never heard of me, and that’s the way it should be,” Riley quotes Sowell as saying.

Sowell, of course, is being much too modest. But the fact remains that too few people have interacted seriously with Sowell’s vast and astonishingly relevant academic output.

Riley’s book, the first biography of Sowell, goes a long way toward rectifying that. Still, nothing’s quite as good as the writings of Thomas Sowell himself—and I am sure that Jason Riley would agree.