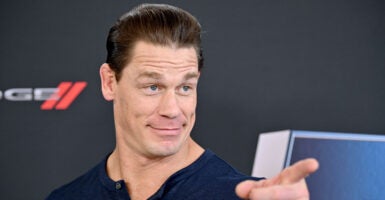 "I love and respect China and the Chinese people. I’m very, very sorry," pro wrestler and actor John Cena says in his apology. Pictured: Cena at "The Road to F9" Global Fan Extravaganza on Jan. 31 at Maurice A. Ferre Park in Miami. (Photo: Dia Dipasupil/Getty Images)

Cena became mired in controversy when promoting his soon-to-be-released movie “F9,” the latest in the “Fast and Furious” franchise, Reuters and other news outlets reported.

While promoting “F9” on a Taiwanese television station in early May, Cena said Taiwan would be “the first country” to see the movie.

His comment immediately drew the ire of communist China, which views Taiwan as an occupied territory. Taiwan became the homeland for remnants of the Republic of China following the Chinese Civil War that raged through the 1930s and 1940s. It has been threatened by the communist People’s Republic of China ever since.

Facing backlash, Cena went on Weibo, sort of a Chinese version of Twitter, and apologized in Mandarin Chinese.

“In one interview, I made a mistake,” Cena said in Mandarin. “I need to say now that this is very, very, very, very, very important. I love and respect China and the Chinese people. I’m very, very sorry. As for my mistake, I really apologize for it.”

Notably, Cena never said what he was apologizing for exactly. Is Cena actually sorry for recognizing Taiwan, an informal United States ally with a system of democratic self-government?

He was really saying: “Please, please don’t shut down our movie! I’ll be good.”

There is no doubt that a significant part of the financial success of “F9” is dependent on its Chinese audience. But Cena’s groveling didn’t go over well with American and Western audiences across the political spectrum.

Cena’s persona in WWE and movies has settled into a sort of clean-cut, all-American action hero. Seeing him apologize to China like this is sort of like Christopher Reeve apologizing to the Soviet Union in Russian after filming a Superman movie.

Though many have taken the opportunity to go after Cena in particular, the whole incident highlights a deeper set of problems.

It’s becoming clear that Hollywood is increasingly reliant on both funding from China and the huge audience it reaches there.

This has become so much the case that Hollywood studios and celebrities are willing to anger and isolate their American audience to keep the Chinese money spigot going.

Hollywood, and much of corporate America, now follows the model set by NBA star LeBron James.

They are extremely “woke” in public and deeply engaged in U.S. culture war issues, firmly siding with the priorities of left-wing activists and the Democrat Party in general when the consequences are minimal.

However, stars and moguls become ruthlessly cynical when dealing with Communist China, throwing out all pretense of their commitment to free speech, democracy, and “anti-racism” at the snap of a CCP censor’s finger.

Somebody in the NBA says Hong Kong should have democracy? Shut up and dribble.

Taiwan is a country? Bow low and beg for mercy.

We are told on one hand that corporate America is leading a kind of moral great awakening, yet it says nothing about—and even lobbies on behalf of—a country that engages in ethnic cleansing and employs literal cotton-picking slaves.

But the problem is bigger than a few sellout Hollywood celebrities.

The behavior of Hollywood and much of corporate America, as exemplified so clearly by Cena and James, is just a small preview of the world we will find ourselves in if America and the free world are shoved to the side by a rising, authoritarian China.

It won’t just be a few celebrities forced to placate China perpetually, it will be everyone.

China will be an authoritarian regime that is not only content to keep its own subjects tightly controlled by increasingly sophisticated tools of tyranny. No, it will insist that the whole world plays by its rules, that our freedom of speech must bend to the whims of the Chinese Communist Party, that we accept life as a kind of vassal to China.

And if you don’t obey, the Chinese state will manipulate powerful interests that it controls in your own country and elsewhere to hurt you, to silence you.

Governments of all types tend to grab power and bend the truth to suit their interests. What makes free societies different is that we have limits on government power, and in the case of the United States, constitutional guarantees that protect the right of free speech.

The Chinese system works in the opposite direction. It gives all power to those in power, it gives them the ability to direct what they want the “truth” to be.

Subjects within that system are expected to live by lies.

In the case of China’s policy regarding Taiwan, direct and terrible global consequences have resulted, as Melissa Chen, New York editor of The Spectator, explained:

Beijing’s success in blocking Taiwan’s official participation in the World Health Organization prevented a quicker, more effective response to the COVID-19 pandemic by suppressing information early on that could have saved millions of lives.

It seems many Hollywood studios and celebrities have caved to the inevitability of living under a China-led system, deciding it’s worth it to sacrifice small pieces of their freedom for the millions of dollars they gain from a direct partnership with the world’s most powerful communist regime.

Perhaps the clarity of living under authoritarianism makes life easier for the powerful and connected to operate, in comparison to the fickleness of a free society.

In the end, some men learn to kiss the chains that bind them.

But there was a time when Americans believed that a day, an hour, in virtuous liberty was worth an eternity in bondage, that America’s strength came not simply from its powerful armies, but its citizens’ refusal to live under the boot of a tyrant.

If Americans still hold to that and still see a future for freedom, we must not only support leaders keen to the threat presented to us. We must support private citizens and businesses that refuse to surrender their God-given rights to the highest bidder.