China Is Attempting to Control What Americans Think 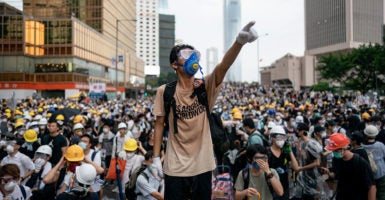 There are signs that civil society and our leaders are finally fighting back against censorship. Pictured: Demonstrators in Hong Kong protest June 12 against the policies of the Chinese government. (Photo: Anthony Kwan/Getty Images)

Russia has drawn a lot of criticism for its heavy-handed manipulation of U.S. social media, and deservedly so. But almost unnoticed, another nation has been trying to control what Americans think by censoring free expression at our universities, on the internet, in media and movies, and even by sports clubs: China.

There are signs, however, that civil society and our leaders are finally fighting back.

And not a moment too soon. Beijing is trying to do nothing less than “impose its speech restrictions on the rest of the world,” as Facebook founder and CEO Mark Zuckerberg pointed out in an Oct. 17 speech at Georgetown University.

His embrace of free expression against repressive tendencies in Beijing and here was a breath of fresh air.

China’s obsessive actions represent nothing less than an attempt by a foreign power to shape the views of a democratic electorate whose opinions, translated through the ballot box and other means, shape public policy.

Beijing gives millions to universities in exchange for silence on its human rights transgressions, forces Hollywood studios to submit their productions to Chinese censors, and buys radio stations here. More recently, it censored what NBA players and executives can say about China, even threatening NBA Commissioner Adam Silver with “retribution sooner or later.”

China’s communist leaders want Americans to be presented with a sanitized picture of a China with no concentration camps for Muslim Uighurs, no repression in Tibet, no violation of promises made to Hong Kong, no repression of dissidents, no denial of freedom of speech or conscience, and no expansion into the South China Seas.

In other words, an unrealistic picture.

Sure, China has come a long way from the crazed chaos under Mao Zedong. The market reforms introduced by Deng Xiaoping starting in the late 1970s have given it economic success. But that has not translated into political freedom; China remains a repressive state.

That’s why it’s important that America resist attempts to introduce its values here.

In his Georgetown speech, Zuckerberg offered a stark choice.

The global internet, he predicted, will be operated either with American or Chinese ethics. He vowed to run his company on American values. It amounted to a remarkable turnaround for a man who has seen his company as not really American, but transnational.

But which social media hegemonic model will other countries adopt? Not long ago, it looked like America’s, Zuckerberg said. Now, it’s an open question. Some say it will go both ways: the “splinternet.”

“China is building its own internet focused on very different values, and is now exporting their vision of the internet to other countries,” Zuckerberg warned, adding:

Until recently, the internet in almost every country outside China has been defined by American platforms with strong free expression values.”

There’s no guarantee these values will win out. A decade ago, almost all of the major internet platforms were American. Today, six of the top 10 are Chinese.

We’re beginning to see this in social media. While our services, like WhatsApp, are used by protesters and activists everywhere due to strong encryption and privacy protections, on TikTok, the Chinese app growing quickly around the world, mentions of these protests are censored, even in the U.S.

Is that the internet we want?

Zuckerberg gamely used the dilemma over China to put our own hot-button debates into perspective: “While we may disagree on exactly where to draw the line on specific issues, we at least can disagree. That’s what free expression is.”

The Facebook founder correctly observed that “the fact that we can even have this conversation means that we’re at least debating from some common values.”

“If another nation’s platforms set the rules,” he said, “our discourse will be defined by a completely different set of values.”

Someone else who is fighting back is filmmaker Quentin Tarantino, who just revealed that China had asked him to make changes to his latest release, “Once Upon a Time in Hollywood.” While most other studio heads buckle under, Tarantino told Beijing to take a hike.

China has not released his film, but Tarantino’s defiance earned him the backing of Secretary of State Mike Pompeo. He tweeted: “I applaud Quentin Tarantino’s refusal to recut his film to appease China’s censorship. Unalienable rights such as free speech should not be for sale.”

Pompeo himself has been active on the Hollywood front.

In a September speech to the Motion Picture Association of America, Pompeo told Hollywood moguls that President Donald Trump sought reciprocity in accessing China’s lucrative movie market, the second-largest after the United States. But he asked them in return to stop bowing to China’s censors.

Zuckerberg, Pompeo, Tarantino, and Silver all come from different walks of life, but their run-up against Chinese restrictions is a welcome awakening. Vladimir Putin’s Russia is important, but we need to focus on China, too.