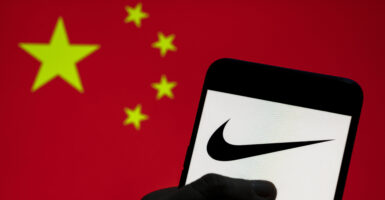 When it comes to China, woke corporations all appear to have the same approach as NBA star LeBron James. (Photo illustration: Budrul Chukrut/SOPA Images/LightRocket/Getty Images)

It appears that much of corporate America has picked up the fine and proper art of virtue signaling that is so fundamental to the modern woke elite.

Much has been said about how many corporations have stepped in to publicly denounce Georgia’s voter integrity law and have become “woke” on many other issues.

A Yale business school professor even said in The Wall Street Journal that corporations are leading a “fifth spiritual awakening in America.”

Nowhere is this more apparent than in their relationship with Communist China.

In fact, when it comes to China, woke corporations all appear to have the same approach as NBA star LeBron James.

You see, James was a real trailblazer—but not as a basketball star.

He’s the model for the shallow, empty, and consequence-free crusading necessary to maintain status in the elite media-approved class while it ruthlessly protects personal financial interests in the face of actual tyranny and injustice.

When taking the easy path of joining left-wing social justice causes in the United States, be loud and obnoxiously uniformed. On the topic of China, a country that tramples on free speech and engages in systemic racism, say nothing and tell everyone else to “shut up and dribble.” There’s big money at stake!

It seems much of corporate America is now operating with the same playbook as the NBA star.

The Georgia voting law, among other things, requires voter ID for those casting absentee ballots, adds early voting on the weekends before elections, and codifies the use of ballot drop boxes.

As I’ve previously pointed out, the corporate denunciations of Georgia’s election law have amounted to little more than shallow talking points rather than direct critiques. Many have repeated the “voter suppression” media narrative without explaining exactly how that would work.

One wonders, did these corporate leaders even read the legislation, or did they just not care one bit about the truth of the matter before misrepresenting it?

Communist China, of course, is not democratic at all. The people are given candidates to vote for by the ruling party. Even then, many of those “elected” officials never are actually seated in the national Congress.

China is a dictatorship that increasingly leans toward one-man rule.

For all the corporate denunciations of Georgia and threats to punish the state, almost nothing is said by these same companies about their connection to an authoritarian regime that rampantly disregards the most basic rights of its citizens and puts ethnic minorities in concentration camps.

For instance, the same week that Major League Baseball announced it would move its All-Star Game out of Atlanta, it announced that it had extended a deal with a Chinese company to get more involved in China’s market.

I guess the importance of protecting “democracy” stopped at the U.S. border.

The CEO of Patagonia Inc., Ryan Gellert, denounced the Georgia law and called on other corporations to denounce it too.

In 2013, Patagonia released a statement about its factories in China: “We’ve made the choice not to disengage from countries on the basis of their policies. We believe in choosing factories wisely and in constructive engagement with others to lobby or work for change.”

How did that lobbying for change go?

The only change seems to be the policy of Patagonia, which now seeks to disengage with states that pass laws that left-wing activists don’t like.

Patagonia did announce in 2020 that it will sever ties with the notorious Xinjiang region. But as conservative commentator Dana Loesch noted on Twitter, the company still has 13 factories in China as a whole.

It should be noted too that the problem isn’t with Xinjiang province itself, it’s with the communist regime that is ethnically cleansing Xinjiang of Uighur Muslims and using them for slave labor.

Some corporations have gone further in their support for China.

Coca-Cola Inc., which has been one of the most vocal and prominent companies to denounce Georgia’s voting law, actively worked with the U.S. Chamber of Commerce and other big companies such as Nike and Apple to lobby against a bill that would have banned imported goods made by forced labor in the Xinjiang region.

“Xinjiang produces vast amounts of raw materials like cotton, coal, sugar, tomatoes and polysilicon, and supplies workers for China’s apparel and footwear factories,” The New York Times reported in November. “Human rights groups and news reports have linked many multinational companies to suppliers there, including tying Coca-Cola to sugar sourced from Xinjiang and documenting Uighur workers in a factory in Qingdao that makes Nike shoes.”

Coke, Nike, Apple and other companies are so woke that they paid millions of dollars to ensure they can continue to reap the benefits of products made by literal cotton-picking slaves.

Ruthless pursuit of self-interest in the face of tyranny and injustice. Check.

It appears that many corporate leaders not only are willing to collaborate and use their collective power to punish states that pass laws similar to Georgia’s, they are seemingly willing to work alongside high-profile groups connected with the Democrat Party too.

National Review columnist Dan McLaughlin writes of this arrangement: “You can call that a lot of things, but it is very far removed from the operation of a free market in goods, services, or ideas.”

The woke invasion of big business has been a long time in the making. The hypocritical actions regarding China reveal its shallowness.

That doesn’t mean this isn’t a deeply worrying trend with serious consequences for our free society.