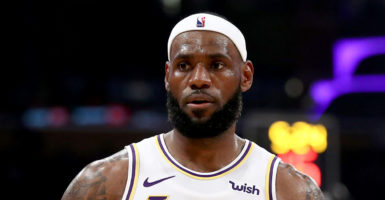 LeBron James' stand, as with most acts of pretend celebrity bravery, resulted in hosannas being thrown at him by the press and, more importantly, never cost him a penny. Pictured: The Lakers' James during the first half of Wednesday's game against the Golden State Warriors at Staples Center in Los Angeles. (Photo: Sean M. Haffey/Getty Images)

Morey’s sin was sharing an image of a slogan that read: “Fight for freedom. Stand with Hong Kong.” Even though the GM, regrettably, deleted his tweet, one strongly suspects his grasp of China—where the state is running “reeducation” camps filled with Uighurs—is considerably stronger than any of the NBA’s leading apologists’.

Only last year, James, a purported champion of social justice, came out in support of former quarterback Colin Kaepernick with the vacuous platitude, “I stand with anyone who believes in change.”

Anyone? Of course, LeBron’s stand, as with most acts of pretend celebrity bravery, resulted in hosannas being thrown at him by the press and, more importantly, never cost him a penny.

Americans tend to use word like “stand” and “fight” in their political disagreements, although they never really have to stand and fight for anything. Tank Man stood and fought. The Hong Kong protesters stand and fight. We take to social media and argue.

Posting a Nike-approved picture of Kaepernick on your Instagram account—adorned with the $40 million market-tested slogan “Believe in something, even if it means sacrificing everything”—is not an act of bravery, LeBron.

And that’s fine. All of this just speaks to the relative safety afforded dissent and protest in our political life.

In the United States, celebrities are free to accuse the president of being a fascist dictator or “bum,” and no one’s coming to knock on their doors. Watching fabulously wealthy men fretting over their words abroad is a useful reminder of the liberalism we have inherited.

There’s nothing wrong with playing NBA games in China. The Chinese people are the victims of their system, after all, and the more connection they have to the rest of the world the better. There isn’t really even any pressing demand for professional athletes to speak out on geopolitical issues.

Once the Hong Kong question was exposed, though, it was deeply revolting to watch those who benefit most in a meritocratic society acquiescing to the illiberal diktats of a foreign regime.

It’s especially galling to listen to those who peddle hysteria about contemporary American politics pandering to the Chinese commissars. Apparently, those most prone to calling out pretend Hitlers can’t get themselves to say a negative word about real-world Hitlers.

Take Warriors coach Steve Kerr, a constant social media commentator, with opinions on seemingly every contemporary political issue. First, Kerr deflected questions about the totalitarian Chinese state by risibly claiming he needed to confer with his brother-in-law, a professor, to get a better handle on the issue.

When later asked if he’d ever been confronted about human rights abuses on his previous trips to China, Kerr replied: “No. Nor has [America’s] record of human rights abuses come up either. … People in China didn’t ask me about, you know, people owning AR-15s and mowing each other down in a mall.”

Showing contempt for your own country doesn’t erase 70 years of mass murder, famine, and incomprehensible hardship for the Chinese people. The Chinese state not only sanctions concentration camps, it subjects countless people to other forms of totalitarianism.

Those who shoot AR-15s in American malls are criminals and murderers who are breaking an array of laws in a free country. Not a single politician or organization approves of their actions. The fact that Kerr would compare the two is at best clueless and at worst shamefully unpatriotic.

“My team and this league just went through a difficult week,” LeBron ludicrously lamented after some well-deserved blowback to his initial comments. “I think people need to understand what a tweet or statement can do to others. And I believe nobody stopped and considered what would happen.”

What happened? The Chinese Basketball Association cut some ties with the Rockets, and it would probably cut ties with the NBA if players and managers had the decency to speak out. I suppose it’s too much to expect NBA stars to back Hong Kong freedom fighters rather than agonize over rounding errors in their banking accounts.

The NBA wants to make money in China. There’s nothing wrong with exporting capitalism. But if the NBA is going to start adopting and enforcing the illiberalism of the Chinese state to make money, it becomes a huge ethical problem.