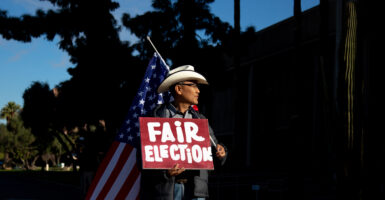 The Heritage Foundation's Election Fraud Database is intended to highlight cases of proven fraud and the many ways in which fraud has been committed. Pictured: Jae Chin protests outside the state Capitol Executive Tower on Dec. 14 in Phoenix at the same time as Arizona's presidential electors met to cast their ballots for president and vice president. (Photo: Courtney Pedroza/ Washington Post/Getty Images)

In “Thanks to Kobach, Trump and conservative think tank, we know extent of voter fraud,” Kansas City Star columnist Charles Hammer on May 20 wrote that The Heritage Foundation’s Election Fraud Database has 1,322 proven instances of election fraud, including 17 cases from Missouri.

That, he said, is “measly” compared with the number of registered voters.

While we appreciate his drawing the public’s attention to our database (now up to 1,328 cases), Hammer left out some vital information.

Significantly, he omitted the fact that, as prominently stated in its introduction, the database presents a “sampling” of election fraud cases and “is intended to highlight cases of proven fraud and the many ways in which fraud has been committed.”

It does not capture all cases and certainly does not capture reported instances or allegations of election fraud, some of which may be meritorious, some not, that are not investigated or prosecuted.

Because of vulnerabilities that exist in state’s election laws, election fraud is relatively easy to commit and difficult to detect after the fact.

Moreover, some public officials appear to be unconcerned with election fraud and fail to pursue cases that are reported to them. It is a general truism that you don’t find what you don’t look for.

If he wants more detailed information on some other elections that were overturned due to fraud, he may want to review a case study The Heritage Foundation released last year, “Four Stolen Elections: The Vulnerabilities of Absentee and Mail-In Ballots.”

It isn’t our intention to overstate or understate the extent of the problem. That’s one reason our database includes only proven instances of voter fraud, not allegations of election fraud, of which there are many.

As we further acknowledge in the introduction:

There are people who claim that election fraud is massive, and those who claim it is exceedingly rare or doesn’t occur at all. … The big problem is that nobody really knows the extent of election fraud, including us.

While we are not making any definitive claims about the extent of election fraud in our country, we are confident in saying that there are far too many vulnerabilities in our current system.

However, and this is the most important point, we add:

Winning elections leads to political power, and the incentives to take advantage of security vulnerabilities are great, so it is important that we take reasonable, commonsense steps to make it hard to cheat, while making it easy for legitimate voters to vote.

There are those, such as Hammer, who seek to minimize or ignore the current vulnerabilities in our election systems and the potential extent of the election fraud problem, just like the proverbial police officer at an obvious crime scene saying, “Move along, nothing to see here.”

In our view, the integrity of our elections and the current vulnerabilities in the system are too important to ignore.  Accordingly, The Heritage Foundation will keep looking and pressing on this important issue.

This article was originally offered to The Kansas City Star, which declined to publish it.