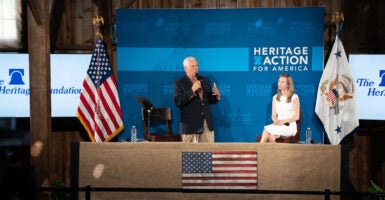 "In my experience, nobody hates bad cops more than good cops," Vice President Mike Pence says Thursday at the "Fight for America" town hall in Iowa. At right: Jessica Anderson, executive director of Heritage Action for America. (Photo: Office of the Vice President)

“We have a lot of friends of ours who are police officers. It is hard to see the attacks on them,” Mattaliano, of Solon, Iowa, said Thursday in an interview with The Daily Signal.

Mattaliano, 60, was one of the Iowans attending a town hall on law enforcement here featuring Vice President Mike Pence. The event at Living History Farm launched the “Fight for America” campaign, a project of The Heritage Foundation and its grassroots partner organization, Heritage Action for America.

In his remarks to the crowd, Pence said: “You have a president, you have an administration, that is committed to law and order and to supporting the men and women who serve on the thin blue line.”

“There is no excuse for what happened to George Floyd,” Pence said, referring to the Minneapolis man who died in police custody May 25, sparking protests across America. “But in my experience, nobody hates bad cops more than good cops. I don’t even want to say the majority–almost everybody that wears a uniform in the United States [represents] the best of us.”

In the current environment of violence and unrest, it already has  become more difficult to recruit and retain law enforcement officers across the country, Lt. Todd Perdue of the Crawford County Sheriff’s Office told Pence.

“My question to you is, ‘What is the long-term threat to police officer retention from the defunding movement, and how can it be combated?” Perdue, an 18-year veteran, asked.

Pence responded that Americans in the main are with law enforcement, regardless of the rhetoric coming from the radical left.

“The other thing that is wrong with the language of the radical left is, one can’t help but think it is … discouraging courageous young men and women from pursuing a career in law enforcement,” Pence said, adding:

And, similarly, it is resulting in people choosing to leave a career in law enforcement. I read a month ago, because of the utter lack of support for the NYPD by Mayor [Bill] de Blasio, that they had to set a monthly limit on the number of retirements because they couldn’t process the number of officers who were planning to retire out of NYPD early. That’s heartbreaking.

The Fight for America campaign is designed to advocate American values, oppose the extremism of the far left, and support both law enforcement and accountability in the education system.

Heritage Action Executive Director Jessica Anderson served as moderator for the town hall that kicked off the campaign.

“Vice President Pence has stood strong for law enforcement while the left has let them down,” Anderson told The Daily Signal. “We were so grateful that he came to speak to the great men and women in blue today and to launch Fight for America. I’m excited to continue fighting to keep our nation safe, secure, and free for families in Iowa and across the nation.”

Heritage Foundation members as well as Heritage Action activists, called Sentinels, are part of a network that is more than 1.5 million strong. The Daily Signal, Heritage’s multimedia news organization, traveled with Pence to Iowa aboard Air Force Two.

Jack Seward, 64, another town hall attendee, said he was a police officer for 30 years and now is a member of the Washington County Board of Supervisors.

“Contrary to what the left wants you to believe, Trump has not been tyrannical and has not tried to usurp the Constitution,” Seward, of West Chester, Iowa, said. “Just supporting the Constitution and promoting law and order, that is the best thing that can be done.”

Pence stressed in his speech that there is no First Amendment right to riot and destroy.

Pence said that the recent rhetoric about defunding police has consequences:

We live in a time when we literally have leading politicians that are talking about defunding the police. As that rhetoric rises from even some of the leading Democrat politicians in America, we are actually seeing a rise in violence across the country, in cities where the case for defunding [police] is being made most pointedly.

New York City just reached 1,000 shooting victims so far this year, more than in the past two years combined, Pence said. One person was killed and 20 others wounded or injured early Saturday at a cookout in the District of Columbia, he noted.

“It is remarkable to think [that] as liberal politicians are talking about dismantling the police department, as they suggested in Minneapolis, cutting NYPD by $1 billion in New York, one city after another, Seattle, Portland, and elsewhere, we also see a rise in crime,” the vice president said.

Sgt. Chad Butler of the Shelby County Sheriff’s Office, with 21 years in law enforcement, asked Pence: “As a law enforcement officer, I am personally concerned about the future of safety and security in this country. What is the Trump administration’s plan to reform policing in America?”

Pence first told Butler: “You have the harder job. They only shoot at me with words.”

The vice president went on to explain that the Trump administration is taking an approach that is opposite to that seen in cities run by liberal mayors:

Pence also spoke to supporters earlier Thursday at the Iowa Fairgrounds in Des Moines. Among those attending that event was Rob Mudd, of Cedar Falls, who works in advertising.

“He’s done great for the economy,” Mudd, 53, said of Trump in an interview with The Daily Signal. “And I think the economy was crippled [by COVID-19].”

“I think Kim Reynolds has done a good job,” Mudd said of Iowa’s governor. “In the middle of the country, we’re solid people.”

He described himself as “a Trump guy.”

“He’s improved the economy,” Mudd said of the president. “When people have money, they spend it.”

Jeff Kaufmann, a seventh-generation farmer who is chairman of the Iowa Republican Party, said Trump has not been afraid to lead in areas where other presidents have shied away.

Kaufmann credited Trump with “not being afraid to tackle the issues that no other president would tackle” and specified that “tackling the disparities with China” was “huge.”

“I think … the reason the farmers have stayed with the president [is] because they appreciate him at least trying to attack that issue,” Kaufmann told The Daily Signal. “And no president has done that before, Republican or Democrat.”

Kaufmann, also a history professor and former state legislator, said his son represents the eighth generation on his farm. His family, he said, goes back to long before Iowa became a state.

I’ll be honest, when he was first elected, I’m a seventh- generation born farm kid, and … I wondered, you know, is this New Yorker going to get it?

We’ve had what I consider great presidents before that didn’t necessarily understand the rural issues. He made himself an educator himself. So he gets it.