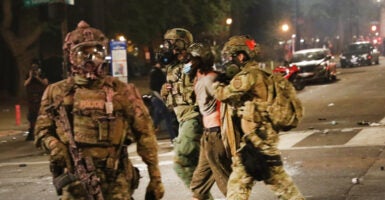 The first and most important duty of our government is to keep our country safe. No country should allow a militant attack on its courthouses and federal property.

And no American president should turn a blind eye to the mass carnage in Chicago and other cities. The president is both authorized and honor bound to address these issues.

Those claiming that the Trump administration’s response is purely political miss these core points. The fact that there has been a political reaction along partisan lines to President Donald Trump’s actions doesn’t mean his actions are politically motivated.

Trump didn’t create the riots in Portland, Oregon, nor foment civil unrest around the country. But he is put in a position where he must respond.

The media and leftist politicians have engaged in a deeply destructive psychological operation by trying to present the current unrest as “peaceful protest” with a few bad apples intermingled. What we are seeing in Portland and elsewhere is not peaceful protest, it is organized criminal activity, including rioting, looting, arson, and assault on federal law enforcement officers.

The existence of some “peaceful protesters” in a mob doesn’t make the mob any less of a mob; it makes those “peaceful protesters” part of the mob. Anyone’s presence at a mob event known for firebombs, commercial fireworks, and tearing down walls (I thought walls didn’t work?) makes the job of law enforcement to restore the peace all the more difficult and dangerous.

Additionally, the adjective “peaceful” omits the absolute ugliness that best describes these events known for vulgar agitation. These aren’t peaceful protests with language moored to the Martin Luther King Jr.-John Lewis tradition of nonviolent direct action. They are, in fact, an absolute renunciation of those tactics and traditions.

The frustrating part of the media’s portrayal of the riots is that the alleged and advertised goal, racial equality, is agreed upon by virtually everyone. Any part of civil society that believes in racial inequality is shunned by everyone in the mainstream of America.

But that is not the real goal of the riots. At this point, it is abundantly clear that the actual motivation of this anti-Trump paramilitary action is to stoke unrest and to turn the outrage on Twitter and other social media into live-action role-playing.

Critics of the president who claim the federal response represents unprecedented mission creep are sorely mistaken. Federal authorities have protected the Mark O. Hatfield U.S. Courthouse since it was built in 1997. Had the rioters attacked in 1997, 2007, or last year, the role of the federal government would have been the same: Protect the courthouse.

The president’s critics also have levied a series of non-sequitur criticisms ranging from the uniforms of federal officers to their use of unmarked cars.

My Heritage Foundation colleague Lora Ries has dispelled these false claims, pointing out the obvious: The uniforms make abundantly clear that the officers are federal (if you’re legitimately confused by a camouflaged officer in tactical gear replete with government insignia, then maybe a paramilitary riot is not for you) and the use of unmarked cars is a permissible and common tactic.

These critics also ignore the long history of the federal government’s role in maintaining the peace and civil liberties of Americans. This history is consistent from putting down the Whiskey Rebellion in 1771, to protecting black children integrating schools in the 1950s, to quashing the LA riots in 1992. Restoring order is an American tradition.

As of the writing of this piece, Oregon Gov. Kate Brown, a Democrat, has backed down from her previous stance of allowing the riots to continue. Brown has promised to enforce the law if the Department of Homeland Security lets her take charge.

If she does not, then Trump and the Department of Homeland Security are ready to reassert themselves.

And they should continue to assert themselves until order is restored and those responsible for the rioting (and organizing and funding the riots) are making license plates instead of Molotov cocktails.