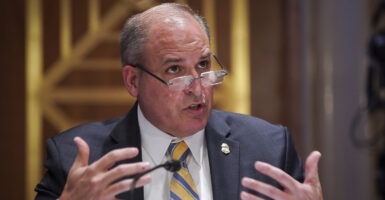 “This is really about politics over public safety,” U.S. border chief Mark Morgan says of liberal politicians and the media on the continuing violence in Portland, Oregon, during a Heritage Foundation event. Pictured: Morgan testifies at a June 25 hearing before the Senate Homeland Security Committee in Washington. (Photo: Alexander Drago/Getty Images)

A top homeland security official is calling out leaders in Portland, Oregon, as well as the mainstream media over criminal rioting and the smearing of federal law enforcement there.

“This is really about politics over public safety,” Mark Morgan, acting commissioner of U.S. Customs and Border Protection, said Monday during a virtual event held by The Heritage Foundation. “This is really about trying to score political points rather than giving the American people the truth.”

The Department of Homeland Security deployed law enforcement officers, including Border Patrol agents, to defend a federal courthouse that rioters in Oregon’s largest city have tried to burn down for more than two months.

Elected Democrats and some media commentators have equated federal agents with Nazis by calling them “Gestapo” or “storm troopers.”

“Can you imagine if anyone in this administration would use that type of terminology against anybody?” Morgan said. “Can you imagine how nuts the mainstream media would go? But yet, we have members of [Congress] that use that language against the men and women of CBP. It’s disgusting.”

Both the mainstream media and Oregon politicians refused to separate peaceful protesters from violent criminals, he said.

“They still want to call them protesters and say there is only a handful of unruly people. It’s just absolutely not true,” Morgan said. “It’s a false narrative out there, and it really doesn’t get us to the unified approach that we should [have] to go in there strong, identify these people, arrest these people, and make sure there [are] real, meaningful consequences.”

Portland Mayor Ted Wheeler, a Democrat, marched with protesters and rioters July 22, when the federal building was under attack. However, Wheeler did an about-face recently when rioters began attacking municipal buildings.

“It’s not until they start doing something similar to other buildings and a police bureau in Portland that he finally says, ‘Well, this is wrong,’” Morgan said of Wheeler. “But to do this same exact thing to a federal building for 45 nights, and federal officers, somehow that was our fault.”

Morgan said it’s a challenge for law enforcement to distinguish violent anarchists from the peaceful protesters, and that Oregon officials share some blame for this.

“If on Day 2, if the leadership in Portland, as well as the state leadership, would have gotten together with the federal authorities there to really give out a unified message to say: ‘Hey, if you’re a peaceful protester, go a block to the right. You’ve got criminals that are taking over and hijacking not only your protest but your very legitimate message. You don’t want to be a part of that,’” Morgan said, adding:

Because the ironic tragedy is that now, not only do you have this violence going on, but the legitimate protests and the legitimate message has been hijacked. That’s really what we should have done together as leaders in any city. Tell the peaceful protesters to go somewhere else to get your message out. Do not provide cover and participate in the lawless activity.

But, make no mistake, when that doesn’t happen and you have legitimate protesters intermingle and then at some point they actually start providing cover for the criminals, it exponentially makes law enforcement’s job more difficult.

Morgan said many of the violent anarchists are not from Portland, and appear to have opportunistically arrived to stir violence.

“That’s what we mean when we talk about Antifa-like tactics and procedures,” Morgan said. “This is very common that we have information and intelligence that shows some of these agitators, these violent opportunists, actually come from out of state to actually incite the riot and incite the violence. It’s happening everywhere you’re seeing this high level of violence.”

Morgan noted that tweets and other social media posts, some from members of Congress, characterized federal agents as “secret police.”

“Yet, if you look at the picture they put up, there is actually a patch on the agents that says United States Border Patrol. The irony there should not be lost on people,” Morgan said.

The Customs and Border Protection chief said his agency has bent over backward to identify who the agents were.

“At any given time for CBP, there’s six separate pieces of identification on their person,” Morgan said. “Big, bold ‘Police’ across their chest. Arm patches on both shoulders. ‘Police’ on the back.”

“Some have even more identification than that. We went overboard to illustrate that, yet people simply ignored it, [including] individuals on the Hill. They refused to listen because it didn’t fit their ideology and they wanted to continue to lie.”