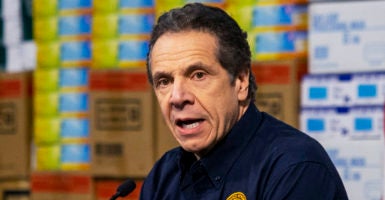 “Slowing the hospitalization rates,” New York Gov. Andrew Cuomo says, “are everything so the hospitals can deal with the rate of people coming in.” Pictured: Cuomo speaks to the media at the Javits Convention Center on March 24. The center is being turned into a hospital to help fight coronavirus cases in New York City, which has about a third of the nation’s confirmed coronavirus cases. (Photo: Eduardo Munoz Alvarez/Getty Images)

New York Gov. Andrew Cuomo said Wednesday he sees a “positive sign” that social distancing measures are working in New York City to slow the spread of the coronavirus.

“The evidence suggests that the density control measures may be working,” Cuomo said at a press briefing about the pandemic in New York.

“This is a very good sign, and a positive sign. Again, I’m not 100% sure it holds or it’s accurate, but the arrows are headed in the right direction,” the Democrat said.

Cuomo, like other governors across the U.S., has ordered restaurants, bars, and other businesses deemed nonessential to close down as part of a strategy to slow the spread of the coronavirus.

The Trump administration issued guidelines on March 16 suggesting that individuals avoid discretionary travel and limit gatherings to 10 people or fewer.

The strategy is aimed at not only preventing people from catching and spreading the virus, but also to prevent hospitals from being overrun by mass numbers of patients.

“Slowing the hospitalization rates,” Cuomo said, “are everything so the hospitals can deal with the rate of people coming in.”

“So, to the extent people say, ‘Boy, these are burdensome requirements, social distancing, no restaurants, no nonessential workers,” added Cuomo. “Yes, they are burdensome. By the way, they are effective and are necessary, and the evidence suggests at this point that they’ve slowed the hospitalizations.”

New York state and New York City have been hardest hit by the pandemic, which emerged out of China in November 2019.

Cuomo said that New York has 30,811 cases of the coronavirus, with 17,856 in New York City alone. The U.S. has recorded just over 55,000 cases as of Wednesday, according to data tracked by Johns Hopkins University.

Cuomo expressed some caution at the hospitalization statistics.

“I don’t place a great deal of stock in any one projection.”

The positive news did not change an overall grim picture of the pandemic in New York. Cuomo said that he expects that New York City will hit its peak number of cases within 14-21 days. He has called on the federal government to provide ventilators to use on patients put in ICU.