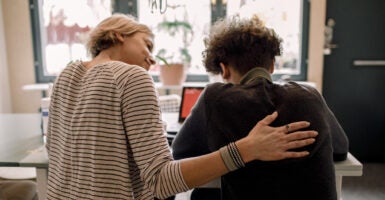 The World Professional Association for Transgender Health now suggests “a more cautious stance on teens” and adds that teens should undergo mental health assessments and should have wondered about their gender identity for “several years” before moving forward with transitioning. (Photo: Maskot/Getty Images)

In an incredible twist, The New York Times appears to at least kind of acknowledge the idea that transgender teens may “need therapy before hormones,” a concept that conservatives have been warning about for years.

In a recent article, the newspaper of note says, “Clinicians are divided over new guidelines that say teens should undergo mental health screenings before receiving hormones or gender surgeries.”

However, despite the headline, a closer look shows one of the most liberal papers in the country still downplayed the risks of transitioning to teens and gave a lot of space to the medical community pushing adolescent transitions.

Last month, the World Professional Association for Transgender Health released a draft of new guidelines for care on the topic, updated for the first time in years. This is what prompted The New York Times piece, so that should explain its obvious bias toward transitions right off the bat.

The guidelines mentioned in the piece are somewhat disappointing. First, the group removed “language that required adults to have psychological assessments before getting access to hormone therapy.” Even adults should receive thorough tests and therapy before deciding to transition. But The New York Times focused on adolescents, so let’s look at that.

The guidelines do suggest “a more cautious stance on teens” and adds that teens should undergo mental health assessments and should have wondered about their gender identity for “several years” before moving forward with transitioning. That is good news and that is the hook for The New York Times headline that made conservatives think perhaps finally even the liberal media had recognized the problems with touting transitions and were willing to admit the medical community should slow down.

However, the devil is in the details, as they say, and World Professional Association for Transgender Health guidelines still disappoint.

In its latest draft chapter on adolescents, the association recommends that teens as young as 14 years of age can receive hormone “therapy.” In its previous edition of its standards of care, however, it recommended “gender-affirming” care begin at the legal age at which medical consent can be given.

The World Professional Association for Transgender Health recognized that in most countries it is 16 years old.

Even in the case of Keira Bell, a 16-year-old who came to regret the hormone replacement therapy and double mastectomy that she received as “treatment” for gender dysphoria, the U.K. High Court recognized that kids under 16 are too young to transition, and originally instituted that as a boundary for gender clinics prescribing puberty blockers

Unfortunately, it later overturned its own decision.

In essence, while The New York Times found a way to highlight how important it is to be cautious when it comes to encouraging adolescents to transition—something conservatives have been saying loudly for years—the guidelines are still coming from an organization dedicated to transgender ideology and they’re still pretty loose when it comes to young people.

From there, the article tries to straddle the fence. It says that even with the new recommendations suggesting caution, that “experts in transgender health are divided on these adolescent recommendations, reflecting a fraught debate over how to weigh conflicting risks for young people.”

So even when the world’s foremost organization on transgender health care tells the medical community to exercise caution, The New York Times says it still found psychologists who express doubt about that.

It’s a reported story, not an opinion piece, so why not just list the new guidelines that demonstrate caution for teens? Why go to the effort of finding doctors who oppose those guidelines? The piece even cites the growth in adolescent gender clinics demonstrating supply and demand. In 2012, there were four in the United States. Now there are 50.

The article cites Laura Edwards-Leeper, a child clinical psychologist in Beaverton, Oregon, who works with transgender adolescents, who says they “absolutely have to be treated differently” than adults. For every one of those, there’s a quote saying the opposite.

“I’m really not a believer in requiring that for people,” said Dr. Alex Keuroghlian, a clinical psychiatrist at Fenway Health in Boston and the director of the Massachusetts General Hospital Psychiatry Gender Identity Program. “Being trans isn’t a mental health problem,” he added.

The fact that the World Professional Association for Transgender Health suggests cautions for teens receiving treatment to transition is good. But from the sounds of this piece, it’s not clear how many doctors care what they have to say, many are still bent toward transitioning regardless of advice to the contrary.

It’s still refreshing to see a paper like The New York Times acknowledge the myriad of problems with teens transitioning and publish the cautionary guidelines, but it didn’t exactly leave it at that. It worked pretty hard to go to bat for the transgender ideology that suggests the only way to handle gender dysphoria is to transition through surgery and hormones. This is unfortunate. Conservatives must continue to battle the media and reframe the topic.

The Heritage Foundation, along with Ryan T. Anderson, Abigail Shrier, and a myriad of other conservative publications, think tanks, and experts, have been decrying the need for teens to transition. Instead, they encourage doctors, teachers, parents, and others involved with treating those with gender dysphoria (especially adolescents) to treat them first with therapy and time. Now, we have one of the world’s foremost transgender organizations agreeing with this and suggesting caution, too.

That’s really the only good thing that came out of this piece.