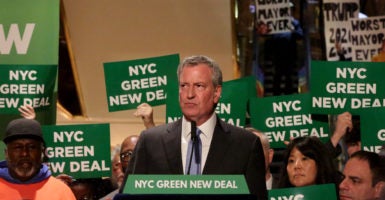 Jadan Horyn is the communications director for Reclaim New York.

“As goes (insert state), so goes the nation…” is one of the most overused clichés in modern political writing. It’s used to describe the outsized influence some states have over the nation as a whole.

But the dangerous thing about clichés is that sometimes, they’re true.

It was New York that nurtured and exported the culture of entrepreneurship that our nation became known for. Throughout our history, this spirit has powered the United States, and New York City is largely responsible for helping create the largest economy in the world.

So it should be particularly concerning to our nation that today, New York’s exports are socialism, the corruption and cronyism that are endemic to accumulated power, and class divisions created by the destruction of the middle class.

Political wunderkind Rep. Alexandria Ocasio-Cortez, D-N.Y., has put meat on the bones of state socialism that has been slowly growing in New York since Gov. Nelson Rockefeller left office in 1973. One need only look to the brutalist buildings in Albany—reminiscent of Soviet mid-century architecture—to see this simple truth.

The roots of socialism have slowly been sprouting in the Empire State since the 1850s. While socialism failed to bear fruit in the U.S. as a whole, unionism became the primary means by which socialists advanced their agenda.

First, they metastasized into large corporations vulnerable to collective action. Although Wall Street financiers were largely able to avoid unionization, large industrial companies such as Bethlehem Steel, General Motors, and AT&T could not.

Bethlehem Steel no longer exits, and General Motors would be bankrupt if it weren’t for a $23 billion taxpayer bailout to the United Auto Workers.

After gaining traction in the corporate world, unions moved into local and state government, with New York leading the way. New York now leads the nation in unionization. And this trend of government unionization has also spread to the federal government.

Unions and socialism share many ideals and practices, including the idea that they can grow strong by siphoning nearly unlimited sums of capital from private producers and the government.

Socialism is spreading its roots through our nation’s political soil with shocking speed. This is occurring because of our collective forgetfulness of the dangers of socialism, coupled with a whitewashing of its revolutionary manifesto and rebranding as enviro-socialism.

The result of today’s socialist renaissance could be the economic destruction of New York, and by extension the entrepreneurial spirit that is at the heart of the United States.

Just look at the way New York had to bribe Amazon to come to the Empire State. New York’s leaders know their policies aren’t working and thought they could throw money at the problem. What they didn’t consider is the ability of socialist Mayor Bill de Blasio and Ocasio-Cortez to scare away the titans of industry.