4 Resources to Spark Honest Conversations About Race and Racism 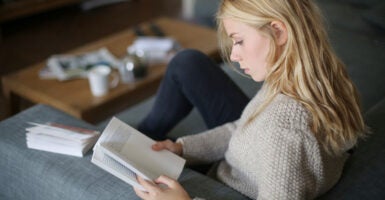 Reading and listening to the personal stories and historical research of those who have experienced racism will open the door for honest conversations that may move America toward unity. (Photo: Catherine Delahaye/Getty Images)

Racial tensions are higher than they have been in decades. Peaceful protests have been overshadowed by violent riots and the destruction of historic statues. Americans are asking: Where do we go from here? And how can we have an honest conversation about racism?

These questions deserve careful consideration, and they deserve answers.

Here are four resources that offer insight into America’s past and how we can find racial reconciliation and move forward as a strong and united people.

Race often is viewed in terms of “us versus them.”

“If you look on the news, … you can just feel it,” Pastor Miles McPherson, author of “The Third Option: Hope for a Racially Divided Nation,” told The Daily Signal in a recent interview.

McPherson argues in his book that there is a “third option” and it looks like choosing to honor and respect all people for what we hold in common.

“The Third Option” provides a strategy for how to think about race in a way that bridges historic divides. McPherson, who is of mixed race, shares his own story of growing up in an African American neighborhood while attending a majority white school and struggling to fit in and find identity in either community.

Numerous pastors and authors, including Rick Warren, author of The New York Times bestseller “The Purpose Driven Life,” have praised McPherson’s work on the subject of race. Warren’s blurb reads: “This is a landmark book, offering a compelling vision for the great issue of our day. Miles helps us to see God’s glory and the beauty of his image in everyone we meet.”

The New York Times’ 1619 Project, initiated last year, created the need for a narrative that would correct the historical errors promulgated by it. The project called 1776 does just that.

The collection of blogs, interviews, and essays features scholarship from various influential African American leaders. Contributors include Carol Swain, a former professor at Vanderbilt and Princeton universities; Robert Woodson, founder of the Woodson Center; John McWhorter,  a Columbia University professor; journalist Clarence Page, and many others.

What the Times’ 1619 Project “completely misses is the peculiar duality of America,” Ian Rowe, a resident fellow at the American Enterprise Institute, writes in one essay.

Rowe adds: “As Hendrik Hertzberg and Henry Louis Gates Jr. wrote in the 1996 New Yorker special edition, Black in America, ‘For African Americans, the country of oppression and the country of liberation are the same country.’”

The mission of the 1776 initiative, according to the website, is to “uphold our country’s authentic founding virtues and values and challenge those who assert America is forever defined by its past failures, such as slavery.”

Kay C. James, author of “Never Forget: The Riveting Story of One Woman’s Journey from Public Housing to the Corridors of Power,” grew up in the projects of Richmond, Virginia. She helped to integrate public schools as a child there in the 1960s.

James faced racism almost daily. Fellow students pricked her with pins as she walked down school halls, called her names, and even pushed her down a flight of stairs.

She went on to attend Hampton University and launch a far-reaching career in business, state and federal government, the pro-life movement, and public policy.

James is also the founder of The Gloucester Institute, a Virginia organization that seeks to train young African American leaders.

“Never Forget,” James’ autobiography, is the true story of her incredible journey through the civil rights movement and on to become one of the most effective conservative African American leaders in the nation.

Today, James is president of The Heritage Foundation, the world’s most influential think tank. While being clear that she is not bitter or resentful about the racism she experienced as a child, and even as an adult, James stresses the importance of remembering the past.

Will Ford and Matt Lockett first met each other in 2005 at a prayer meeting on a cold January morning at the Lincoln Memorial in Washington. Now, 15 years later, they have published “The Dream King: How the Dream of Martin Luther King Jr. Is Being Fulfilled to Heal Racism in America.”

At the prayer meeting, Ford shared the story of his family, who were owned as slaves in Lake Providence, Louisiana, in the 1800s, and how his ancestors used a large, cast iron kettle pot to conceal the sound of their prayers when they gathered in secret.

Ford’s ancestors used the kettle for household tasks, but in prayer it acted as a tool to muffle their voices so that they would not be caught praying—an activity their owners forbade.

Lockett, touched by Ford’s family history, struck up a conversation that led to a friendship and prayer partnership.

For about 10 years, Ford and Lockett prayed together for racial reconciliation in America. Their families grew close.

A decade after their first meeting at the Lincoln Memorial, Lockett discovered a shocking piece of family history that connected his ancestors to Ford’s and took the friends on a journey of forgiveness, ultimately leading them to co-write “The Dream King.”

Alveda King, niece of Martin Luther King Jr., wrote in a blurb: “Will Ford and Matt Lockett are indeed advancing the God-inspired dream of [the] Rev. Dr. Martin Luther King Jr. Two paths united beyond skin color came together to bridge the racial divide in this compelling saga, destined to turn the pages of history toward victory.”