What Ross Perot Gave to America 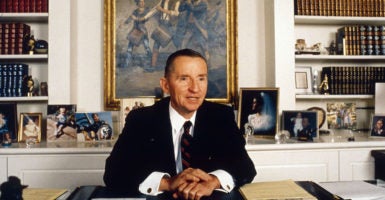 Conditions in Iran were rapidly deteriorating in 1978. The shah had stepped down, the prime minister had no ability to stop the growing political and social upheaval, and the mullahs, led by the Ayatollah Khomenei, were aggressively moving to seize power.

Ross Perot’s company, Electronic Data Systems, was on the verge of fully completing a large contract for the Iranian government, arranged under Shah Pahlavi. But as the risks to employees grew, Perot decided to pull his people out of the worsening situation.

Before everyone could be evacuated in late December, however, two of his people were arrested and imprisoned.

Perot, always prioritizing the welfare of his people first, immediately sought the assistance of the U.S. government. When none appeared to be coming, he took action—an action typical of him, especially when lives were at stake.

A military man himself, and having worked closely with the military since graduating from the Naval Academy in 1953, he sought the assistance of a highly skilled Green Beret, Arthur Simons, and organized his own rescue mission composed of Electronic Data Systems employees—all of whom were former military men with combat experience. He even went in himself as an undercover member of the team.

Perot’s team was able to spur a popular uprising against the hated Ghosr prison in which his people were being held hostage, and then successfully rescue the men. After that, they took a risky two-day journey across Iran and over the border into the safety of neighboring Turkey.

It was classic Ross Perot—less a defining moment than a continuation of his commitment to doing what he knew to be right and needed to be done, in spite of obstacles that kept others from acting.

His lifetime commitment to supporting our men and women in uniform was marked by the same passion, focus, and care, and deeply rooted in his patriotism and love for America.

Over the course of his life, Perot always sought to raise public awareness of our military. He initiated or supported efforts to improve service members’ quality of life, to highlight the critical role they play in securing our country and our people, and to see that their sacrifices were recognized in some way.

In 1970, he tried to send supplies and Christmas gifts to American POWs held by North Vietnam (though these were unsurprisingly rejected by the North Vietnamese).

He funded a parade for American POWs released by North Vietnam as that conflict came to a close, so that they could return to the U.S. recognized and appreciated.

He provided scholarships to the children of servicemen who were casualties of Operation Eagle Claw in 1980, the failed attempt to rescue American hostages held by the Iranian religious regime.

Perot also donated horses to New York City’s mounted police, and he personally funded armed protection for a group of narcotics agents who had received alarming death threats as a result of their work to safeguard Americans from the horrible criminality of drug gangs.

In addition, he established the Perot Foundation to fund medical research focused on the various illnesses contracted by American service members who served in Operation Desert Storm.

For these efforts and so many more, Perot was repeatedly recognized by numerous organizations that deeply appreciated his service to country, his fellow Americans, and especially our military. Among them: the Raoul Wallenberg Award, the Winston Churchill Award, the Patrick Henry and Eisenhower Awards, and the VA Secretary’s Award for his lifetime support of veterans and the military.

Perot was also made an honorary Green Beret by the John F. Kennedy Special Warfare Center and School and received the Medal for Distinguished Public Service, the highest award given to civilians by the Department of Defense.

Yes, he was a wildly successful business pioneer, and arguably the most successful independent/third-party political figure in U.S. history.

He possessed the same keen ability to employ biting wit in commenting on America’s political and social condition that made Mark Twain a household name in his time.

But it was his humanity, his love for those who served their country, and his commitment to do what he could to support others that set him apart in such a special, memorable way.

Finally succumbing to cancer at age 89 after the same sort of tenacious fight—leavened with humor and perspective that characterized his life—he left us a remarkable example of what can be done in life if one has the courage, conviction, and clarity to see what needs to be done in the greatest and most just cause—serving others—and to take action to make a difference.