America Has Always Been a Safe Haven for Jews. An Evil Killer Won’t Change That. 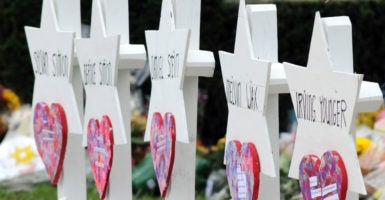 Eleven people at a Pennsylvania synagogue were murdered by a gunman on Saturday. (Photo: Archie Carpenter/UPI/Newscom)

A wicked man shot and killed 11 people at a Pittsburgh synagogue and wounded six others on Saturday.

It was a horrific act of targeted violence against Jews that rightly drew a response from the White House and the nation.

It is sickening to see the heinous result of virulent anti-Semitism that has raised its ugly head.

Yet despite the presence of anti-Semitism in America—a presence that has perhaps increased in recent years—on the whole, it would be nonsensical to think that this country has not been both welcoming and a beacon of liberty for Jews.

This tolerance, acceptance, and embrace of Jews has been true since the founding of the country.

It is unfortunate that many have forgotten the name, for instance, of Haym Salomon, a Polish Jew who was among our great Founding Fathers.

Not only was Salomon among the famed Sons of Liberty, he was also a talented financier. He contributed nearly all of his wealth to the revolution, making him indispensable to his newly formed country while destroying himself financially and putting his life in jeopardy.

Today, a statue of Salomon stands in Chicago alongside a statue of Robert Morris, another great financier of the revolution, and of George Washington, who was acutely aware of Salomon’s contributions to the new nation and that of his Jewish brethren.

The government of the United States, which gives to bigotry no sanction, to persecution no assistance, requires only that they who live under its protection should demean themselves as good citizens, in giving it on all occasions their effectual support.

It is particularly relevant that Washington appears standing beside Salomon. Washington’s solidarity with Salomon and the Jewish community works against the notion that America, despite being founded by mostly Christians, was a nation only for Christians.

Washington authored one of the most moving statements about religious tolerance in our country’s history, setting the standard for what America should be.

The letter, written in 1790 to Moses Seixas and a Jewish congregation in Newport, Rhode Island, deserves quotation in full:

While I received with much satisfaction your address replete with expressions of esteem, I rejoice in the opportunity of assuring you that I shall always retain grateful remembrance of the cordial welcome I experienced on my visit to Newport from all classes of citizens.

The reflection on the days of difficulty and danger which are past is rendered the more sweet from a consciousness that they are succeeded by days of uncommon prosperity and security.

If we have wisdom to make the best use of the advantages with which we are now favored, we cannot fail, under the just administration of a good government, to become a great and happy people.

The citizens of the United States of America have a right to applaud themselves for having given to mankind examples of an enlarged and liberal policy—a policy worthy of imitation. All possess alike liberty of conscience and immunities of citizenship.

It is now no more that toleration is spoken of as if it were the indulgence of one class of people that another enjoyed the exercise of their inherent natural rights, for, happily, the government of the United States, which gives to bigotry no sanction, to persecution no assistance, requires only that they who live under its protection should demean themselves as good citizens in giving it on all occasions their effectual support.

It would be inconsistent with the frankness of my character not to avow that I am pleased with your favorable opinion of my administration and fervent wishes for my felicity.

May the children of the stock of Abraham who dwell in this land continue to merit and enjoy the good will of the other inhabitants—while every one shall sit in safety under his own vine and fig tree and there shall be none to make him afraid.

May the father of all mercies scatter light, and not darkness, upon our paths, and make us all in our several vocations useful here, and in His own due time and way everlastingly happy.

This statement is a tribute to America’s commitment to religious tolerance since its creation. Indeed, Americans have mostly mirrored Washington’s attitude.

This is not to say that there are not anti-Semites of many stripes in this country today. Recent events prove quite otherwise.

Many on the left have been quick to blame conservatives and Trump for the rise in blatant anti-Semitism, but this ignores the openly anti-Semitic and anti-Israel elements that openly operate in their midst.

For instance, Nation of Islam Minister Louis Farrakhan still participates in events with prominent Democrats, and his angry, malignant diatribes against Jews go unpunished on Twitter as the platform silences conservative voices for vague reasons.

Farrakhan has also lambasted the existence of Israel—something quite out of step with the views of most Americans, who overwhelmingly support Israel.

The United States hasn’t just been a haven for Jews within its borders. It has been a long-term ally and friend of Israel, despite the fact that our college campuses often support the boycott, divestment, and sanctions (or BDS) movement, which aims to weaken Israel and includes many openly anti-Semitic members.

Ultimately, Farrakhan, the BDS movement, and other radical voices are outliers in this country, not the norm.

I can only say that for the Jewish part of my family that left Eastern Europe at the turn of the 20th century and emigrated to the United States—given all that has happened in that region since that time, I am deeply thankful that a country like the United States exists and that we were saved from the horrors of the last century.

One mass murderer in Pittsburgh can’t change the fact that America—and not just Jerusalem—is a shining city upon a hill for Jews, a place where all may live according to the dictates of their conscience under just and equal laws.