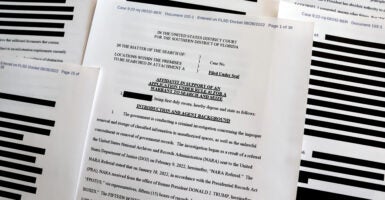 The typically history-focused agency—charged with holding White House documents and other government records under the Presidential Records Act—was thrust into a political firestorm last month when the FBI raided the Mar-a-Lago home of the 45th president.

The FBI alleges that Trump stored classified information in his private residence in Florida. Trump has said he declassified the documents before leaving office and kept them in secure storage .

“To our knowledge, no records containing classified national security information or information classified under the Atomic Energy Act were outside of government control with regard to the transfer of records at the end of the terms for Presidents Clinton, George W. Bush, or Obama,” a National Archives spokesperson told The Daily Signal in an email.

Each of those former presidents clashed with the National Archives over the Presidential Records Act, but the disputes did not pertain to classified documents.

The National Archives and Records Administration provided the statement late Tuesday afternoon, although The Daily Signal first asked about the matter Aug. 26.

The Daily Signal asked how many classified documents did Obama, Bush, and Clinton take with them when they left the presidency and what the agency did to get the documents back.

The National Archives responded three days later, on Aug. 29, saying that because the agency is “experiencing quite a deluge of requests” from the news media, it could not meet a deadline of 4 p.m.

The Daily Signal followed up for several days, inquiring when the agency might respond. It did so Tuesday.

Rep. James Comer, R-Ky., ranking member of the House Oversight and Reform Committee, has requested a briefing from National Archives officials as well as preservation of all documents and communications relevant to the FBI raid of Trump’s Florida home Aug. 9.

The Oversight Project filed a lawsuit Sept. 2 under the Freedom of Information Act against the National Archives and the Justice Department after the agencies did not respond regarding those communications.

“Now, they have a document dispute with us,” Howell said. “Let’s see if the law is truly applied evenly, or if these agencies continue to stonewall our efforts while selectively leaking information [about what was seized in the raid] to liberal media outlets to advance the narrative [Attorney General] Merrick Garland and Joe Biden want.”