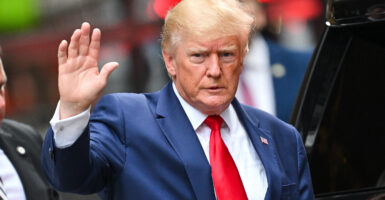 Margot Cleveland is a lawyer, a retired career law clerk of 25 years for a federal circuit court judge, and the senior legal correspondent at The Federalist.

Unless scores of witnesses saw Donald Trump stand in the middle of 5th Avenue and shoot someone, the FBI’s raid of his Mar-a-Lago home represents an unforgivable politicization of our justice system.

The proof rests in the peaceful, undisturbed abodes of Hillary Clinton, Hunter Biden, Jim Biden, James Comey, Stefan Halper, Rodney Joffe, and every other partisan the FBI investigated without violating the sanctuary of their homes.

On Monday, news broke that the FBI had raided the former president’s Mar-a-Lago residence in Palm Beach, Florida. Conservatives justifiably doubt that probable cause supported the search, but an even broader swath of America should see the bureau’s raid as an affront to equal justice under the law and the weaponization of the Justice Department against its political enemies.

The FBI that raided the former president’s personal residence never sought a warrant to search Clinton’s homes after The New York Times reported on March 3, 2016, that, while secretary of state, she had used a private server.

Weeks later Clinton, while plotting her upcoming run for president, wiped her entire server clean using “a sophisticated software program, BleachBit, which eventually made it extraordinarily difficult for the FBI to recover her emails, several thousand of which were successfully destroyed.”

Among the emails deleted were some 30 connected to the Benghazi murders that Clinton never supplied to the State Department upon leaving office—a fairly analogous, albeit more appalling scenario to the theory floated that agents raided Trump’s house on Monday to seize supposedly classified documents.

Agents also didn’t raid Clinton’s homes to recover the 13 mobile devices that the FBI believed the former secretary of state may have used to email her staff.

Instead, the Justice Department asked Clinton’s attorneys to provide agents the BlackBerry phones and other devices. Less than two weeks later, her lawyers claimed “they were unable to locate any of these devices,” leaving the FBI “unable to acquire or forensically examine any of these 13 mobile devices.”

Not only did the Democrat contender avoid suffering through a raid that likely would have netted incriminating evidence of her mishandling and retention of classified information, the FBI’s interrogation of Clinton played like a child’s tea party.

“The voluntary interview, which took place over three and a half hours at the F.B.I. headquarters in Washington, had been weeks in the making,” The New York Times explained, noting that “law enforcement officials and Mrs. Clinton’s team” needed to “coordinated schedules.”

“Democrats also hoped that holding the interview on a holiday weekend might ease the anticipated storm,” the Times noted. Helpfully, the FBI accommodated the presidential candidate’s request, visiting with Clinton on Saturday, July 2, 2016, while the rest of America focused on the long Fourth of July weekend.

The FBI’s accommodations extended much beyond the conciliatory scheduling to an unprecedented breach in protocol: Agents allowed Clinton’s former chief of staff at the State Department, Cheryl Mills, to sit in on the interview.

In her role as chief of staff, Mills “was intimately involved in issues related to Clinton’s private email set-up, the discussions about getting her a secure BlackBerry similar to President Barack Obama’s, and questions that were raised (including in FOIA requests) about Clinton’s communications.”

In other words, Mills was a witness and potentially a fellow target of the investigation, yet the FBI allowed her to hear, and thereby coordinate with, Clinton’s story.

The Justice Department’s handling of Clinton with kid gloves serves as but one of the many examples of dual standards of justice seen when powerful Democrats or their backers face the FBI.

Hunter Biden’s home likewise has seen no breach even as the Delaware U.S. Attorney’s Office enters its fourth year of investigating the current president’s son for multiple potential federal crimes, including tax evasion, money laundering, and Foreign Agents Registration Act violations. Instead, the FBI executed a search warrant on the Apple repair store owner who alerted agents to the existence of his laptop.

And although emails from Hunter’s laptop implicate President Joe Biden’s brother, Jim Biden, in the apparent pay-to-play scheme, the feds have yet to raid his home either.

Comey, former FBI director, likewise sidestepped a search of his home, even though he admittedly took with him multiple memorandums of his interactions with Trump, including ones that contained classified information.

Comey later shared the memos, including some classified information, with a lawyer friend of his, Daniel Richman. On Comey’s behalf, Richman then “leaked sensitive but unclassified law enforcement material to the media” to prompt the appointment of a special counsel to investigate Trump.

The former FBI director’s ploy worked, with acting Attorney General Rod Rosenstein appointing a special counsel on May 17, 2017, the day after The New York Times published news of Comey’s memos.

Rather than seek a search warrant to raid their former colleague’s home, however, the FBI left Comey unmolested, waiting several weeks to voluntarily interview him at his home, at which time Comey provided the documents he had pilfered. And not only did the former FBI director avoid a raid, Comey also avoided prosecution.

Key names in the SpyGate scandal, such as Halper and Joffe, also seem mysteriously missing from any search warrant applications (and indictments). Halper, who served as a confidential human source during the Crossfire Hurricane investigation, fed the FBI false information about the Russian-born British historian Svetlana Lokhova.

Halper also appeared to have lied to agents about his conversation with then-Trump adviser Carter Page. But the Department of Justice seems content without searching his private Virginia home.

Joffe, better known from the Michael Sussmann criminal case as Tech Executive 1, to date, appears to have avoided the raiders as well. While special counsel John Durham’s office indicated earlier this year that Joffe remains under investigation, a search of his home or business seem to have remained off limits so far.

In contrast, those in Trump’s orbit, such as Roger Stone, faced pre-dawn searches and arrests, with scores of federal agents flooding the scene with the tipped-off media in tow. Federal agents reportedly also searched Trump-advocate Rudy Giuliani’s residence in New York, as well as that of Trump associate Victoria Toensing.

Against this two-pronged approach to justice, Americans need not lean conservative or support Trump to spot the scandal. And Americans need not care about politics to oppose the politicization of the Justice Department and FBI: They just need to care about the future of the country—one that cannot survive long if such corruption and cronyism continues.

The views and opinions expressed his commentary are those of the author and do not reflect the official position of the Daily Caller News Foundation. The Daily Signal publishes a variety of perspectives. Nothing written here is to be construed as representing the views of The Heritage Foundation.