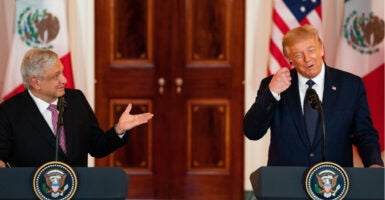 According to both the U.S. and Mexican governments, the visit between President Donald Trump and Mexican President Andres Manuel Lopez Obrador was a resounding success. (Photo: Anna Moneymaker/Pool/Getty Images))

President Donald Trump hosted his Mexican counterpart at the White House on July 8 to celebrate the entry into force of the new United States-Mexico-Canada Agreement trade pact.

The visit was the first time the two leaders met in person and was also the first international trip by Mexican President Andres Manuel López Obrador, commonly referred to as AMLO, since taking office in December 2018.

AMLO started the day by paying his respects at the Lincoln Memorial. The Mexican delegation then visited the memorial to Mexican hero and former President Benito Juarez.

Trump and AMLO met that afternoon and later that evening, and both leaders were joined by leading private sector executives for a White House dinner.

According to both the U.S. and Mexican governments, the visit was a resounding success.

A helpful indicator of a successful Trump meeting is the excessive media coverage predicting the apocalypse and then limited follow-up when it goes well. Over the past three years, analysts repeatedly spun a false narrative that Trump was “destroying three decades of hard work with Mexico.”

Even when Mexico’s previous foreign minister stated that the relationship now is “closer than it was with previous [U.S.] administrations, which might be surprising to some people, but that’s a fact of life,” the contrarians didn’t back down.

There were still few attempts at impartiality, with coverage portraying a bilateral relationship on the rocks. Yet, the doomsday predictions about U.S.-Mexico relations in the age of Trump were publicly laid to rest this month.

Leading up to AMLO’s meeting with Trump even some in our own government injected politics into the mix and sought to blow up the visit. Members of the Democrat-controlled Congressional Hispanic Caucus sent a letter asking Trump to call off the meeting because of the coronavirus pandemic and other leftist talking points.

To the contrary, however, the urgency of the pandemic and the economic crisis required a meeting between the North American leaders.

As explained in a recent Heritage Foundation backgrounder, America’s economic and health recovery is accelerated by cooperation with our trade partners and neighbors.

Mexico is experiencing a dire health crisis because of the coronavirus, which led to a serious disruption of North America’s supply chains. This severely affected the U.S. defense sector, key industries, and manufacturers.

Canceling a meeting where discussions aimed at preventing further economic fallout and planning for North America’s economic comeback was not in America’s interest.

This is a key moment in the U.S.-Mexico bilateral relationship. AMLO’s popularity and the change in tone from the U.S. could reduce the traditional political hurdles that held back bilateral cooperation on more sensitive issues.

Inasmuch as both countries were able to modernize the trade relationship, that mindset should extend to the security challenges and to the health crisis. The pandemic is still raging across North America, and Mexico’s violence rates have reached historic highs.

Looking at the future, the trajectory of the U.S.-Mexico relationship is positive and will benefit both countries. We have two leaders who, while different ideologically, are not only reconciling disagreements, but finding ways of meaningfully advancing the bilateral relationship.

While both leaders are often criticized for their unconventional approach to policy, their perspectives breathe fresh air into stagnated ways of thinking.

This article has been updated to incorporate the nickname “AMLO” for Mexican President Andres Manuel López Obrador.