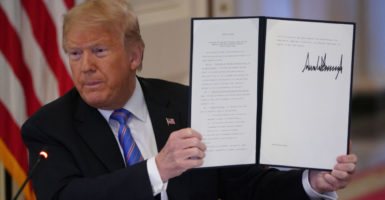 President Donald Trump has signed an executive order that would encourage federal agencies to prioritize skills-based hiring practices rather than focusing on whether or not an applicant has a college degree. (Photo: Mandel Ngan/AFP/Getty Images)

Does it matter more if you can do a job well or if you have a piece of paper that says you can probably do a job well?

Commonsense would suggest the former, yet hiring practices in the United States too often rely on the latter.

The Trump administration on June 26 took a significant step in righting this wrong and fighting back against credentialism.

President Donald Trump signed an executive order that would encourage federal agencies to prioritize skills-based hiring practices rather than focusing on whether or not an applicant has a college degree.

As the executive order notes:

Degree-based hiring is especially likely to exclude qualified candidates for jobs related to emerging technologies and those with weak connections between educational attainment and the skills or competencies required to perform them.

The administration is absolutely correct. Whether or not an applicant holds a college degree should not be the determining factor in whether or not that person receives a job offer.

In reality, a college degree does not say very much about a graduate’s specific skills. Yes, employers can ask for a grade-point average, but they won’t know how rigorous the applicant’s courses were, which professors gave “easy A’s,” or whether a student memorized information to pass a test and forgot it all the next day.

If an employer wants to find out what someone can do, a skills-based application process is a better way to go. And when employers focus on skills, there is no need to guess one’s skills based on their college diploma.

Modern technology has made access to education easier than ever. Yet, students overwhelmingly bypass more streamlined ways to obtain knowledge and pursue a bachelor’s degree to impress employers.

The reason for that is that a bachelor’s degree sends a strong signal to employers. “Signaling,” George Mason University’s Bryan Caplan argues, means:

If a student wants to study at Princeton, he doesn’t really need to apply or pay tuition. He can simply show up and start taking classes.

As a professor, I assure you that we make near-zero effort to stop unofficial education … . At the end of four years at Princeton, though, the guerrilla student would lack one precious thing: a diploma.

The fact that almost no one tries this route—saving hundreds of thousands of dollars along the way—is a strong sign that students understand the value of certification over actual learning.

Many economists agree that signaling drives much of the higher education industry and leads to credential inflation.

If obtaining a college degree becomes the baseline requirement for employment, more ambitious students will always seek additional credentials to separate themselves in the job market, regardless of whether or not the job they seek requires further years of training.

That does not do the U.S. economy, students, or American taxpayers any favors.

While the president’s executive order will not do away with degree requirements for federal positions outright, the shift in focus on skills aligns with the administration’s work in promoting nontraditional education models.

The president has previously expressed approval for apprenticeships and vocational training that allow students to fulfill their career goals without having to pursue a one-size-fits-all college degree.

The Trump administration’s move to refocus hiring on skills rather than degrees is a smart step forward in fighting credential inflation.

It also will open the doors of opportunity to skilled applicants who chose to bypass a college degree yet possess the skills to perform certain jobs.

Removing arbitrary barriers to entry for work will help all Americans, particularly during this time of economic stress due to the COVID-19 pandemic.

Hopefully, the executive order governing federal hiring practices will serve as a success story that the private sector can emulate in the future.